“President Putin has come to China 19 times for visits and international events since 2000, outnumbering all other leaders of major countries,” Xi said at a ceremony at the Great Hall of the People in Beijing. “He is the most well-known and most respected leader of a major country to the Chinese people. He is also my best friend and confidant.”

According to the China’s law on national medals and honorary titles, Friendship Medals are presented to foreigners who have made outstanding contributions to China’s socialist modernization drive, in promoting exchange and cooperation between China and the world, and in safeguarding world peace. Putin is the first foreign national who has been awarded since the establishment of China’s honors system, according to Xi.

Putin thanked Xi for the “great privilege,” calling it a “high recognition” of his work and his colleagues’ work in promoting bilateral ties. He expressed the wish to further strengthen the comprehensive strategic partnership of coordination between Russia and China.

The Russian president is in Beijing for a state visit. He will attend the 18th Summit of the Shanghai Cooperation Organization (SCO) in east China’s coastal city Qingdao this weekend.

During a recent interview with Shen Haixiong, president of the China Media Group, Putin described Xi as “approachable and sincere” and “a very dependable man to work with.”

Xi was the only world leader who has celebrated a birthday with him, Putin revealed.

Xi hailed Putin a major-country leader with global influence and called him a “founder” and “propeller” of the current high level China-Russia relations.

“On behalf of Russia, President Putin signed the Treaty on Good-Neighborliness, Friendship and Cooperation between China and Russia in 2001, laying a solid legal foundation for the two countries’ friendship from generation to generation,” said Xi.

China-Russia relations have withstood tests of fluctuating international situations, and their political and strategic trust has deepened over the years, resulting in profound development in bilateral cooperation in various fields, Xi added, praising Putin for his contributions.

In 2011, China and Russia elevated their ties to comprehensive strategic partnership of coordination.

Xi said the high-level bilateral relations have benefited people of the two countries. He hailed the ties as a “model of harmonious coexistence between major countries and neighboring countries” in today’s world.

Moreover, China and Russia have made significant contributions to the building of a new type of international relations and a community of shared future for mankind, Xi stressed.

Underscoring spirits of good neighborliness and friendship, strategic coordination and win-win cooperation, the Chinese president said he would like to make joint efforts with Putin to usher in a “more glorious future” for China-Russia ties.

Sino-Russian relations within the SCO framework

Why is the Friendship Medal created?

The introduction of the Friendship Medal is designed to convey the basic ideas of friendship, peace, fairness, and justice to the world by setting up models of friendship between China and foreign countries, and to promote the world’s understanding of China, according to the law on national medals and honorary titles.

In its primary colors of golden and blue, the main body of the medal adopts elements including a peace dove, the earth, a handshake, and a lotus, while the chain features elements such as Chinese knots, evergreens, peonies, a jade disc and orchids.

The medal is made with traditional craftsmanship such as filigree inlaid metal.

The design symbolizes the lasting friendship and solidarity between the Chinese people and the people of all other countries, as well as the hope for common prosperity and development around the world.

The honors Xi has received

It is not uncommon for political leaders to receive honors from other countries. Xi has been awarded many times during his overseas visits. 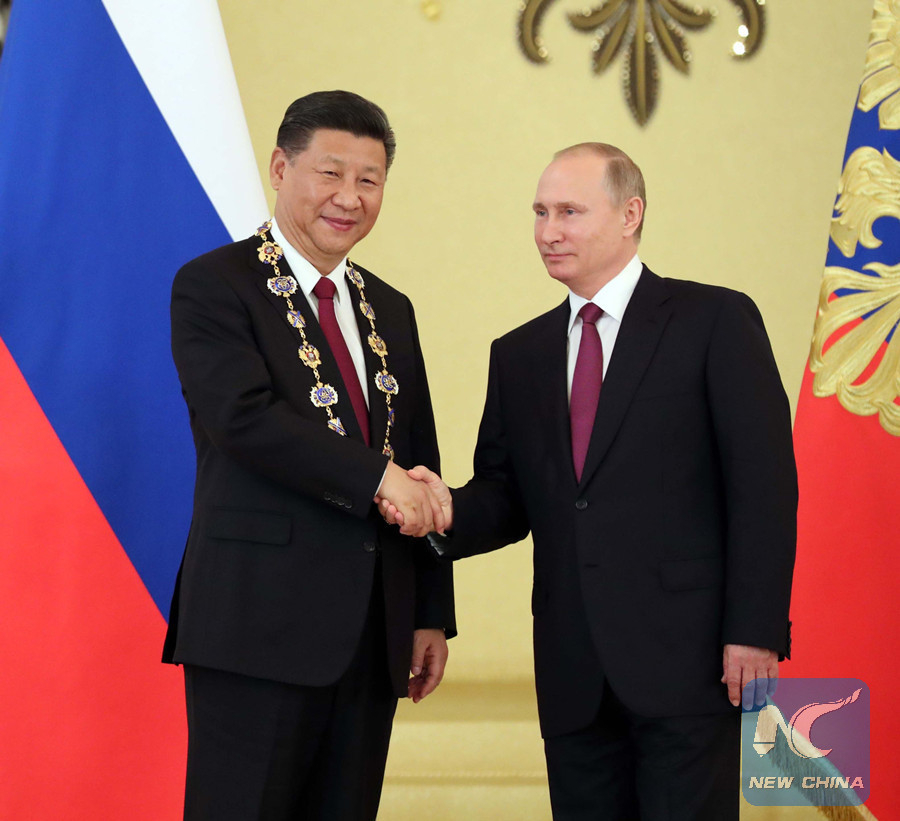 July 4, 2017: Chinese President Xi Jinping (L) is awarded by his Russian counterpart Vladimir Putin the highest order of Russia, or the Order of St. Andrew the Apostle the First-Called, after their talks in Moscow, Russia. /Xinhua Photo

While visiting Russia in July last year, Xi was awarded by Putin the highest order of Russia, known as the Order of St. Andrew the Apostle the First-Called. The order was established in 1698 by Tsar Peter the Great and abolished in 1917, before being re-introduced in 1998.

During his visit to Peru in November 2016, Xi received the Grand-Cross Medal of Honor of the Peruvian Congress from Luz Salgado, the president of Peru’s Congress.

From 2013 to 2016, the Chinese president received a number of honors, such as the Key to the City of the capitals of Costa Rica, Mexico, Argentina and the Czech Republic, Belgium’s Grand Cordon medal of the Order of Leopold, Venezuela’s Order of the Liberator, Cuba’s Order of Jose Marti, Pakistan’s Nishan-e-Pakistan award, and Saudi Arabia’s Order of King Abdulaziz.