Washington, D.C. (SCF) – US Defence Secretary Ashton Carter has ended yet another global war-trot, having visited India, the Philippines, Iraq, and one of the two US nuclear-armed aircraft carriers in its enormous fleet in and around the South China Sea.

He missed out Afghanistan, site of one of America’s recent catastrophic wars, probably because it’s even more dangerous to visit than Iraq, but went to Saudi Arabia on 20 April (along with President Barack Obama), and told his opposite numbers of the Gulf nations that the US has «an enduring commitment» to all of these dictatorships. Then he gave a media conference at which he declared that «the US military remains committed and capable of responding to Iranian malign and destabilizing activities».

What is he planning, now? Which region of the world is next to be blitzed and reduced to shambles by US-NATO military intervention? How many more night-raided women and children and guests at weddings and patients in hospitals will be slaughtered in Washington’s frantic crusade to ensure that America, in the words of its president, dominates the world as «the one indispensable nation»?

Since the beginning of this century the wars of Washington have been disastrous tragedies, although many of us hoped and even believed that after Barack Obama followed George W Bush as President, then sanity might begin to apply. Optimists thought there would be reduction in US military aggression around the world.

We were wrong, and should have been warned by Obama’s declaration in June 2008 that «I will send at least two additional combat brigades to Afghanistan», because, among other things, «We cannot lose Afghanistan to a future of narco-terrorism».

After Obama became president he sent an extra 60,000 troops to Afghanistan, for a total of 100,000 by August 2010. They suffered enormous casualties and achieved nothing. (There were 155 US service members killed in 2008, and 499 in 2010; thousands were maimed or mentally wrecked.) The Taliban have not been defeated and drug production is far worse than it was when Bush went to war in 2001.

NBC News reported that the US Special Inspector General for Afghanistan Reconstruction, Mr John Sopko (one of the few honourable senior officials in Washington) said that in spite of spending 7.8 billion dollars of US taxpayers’ money in trying to stop poppy cultivation and heroin manufacture, Afghanistan continues to be the world’s biggest producer as well as its third most corrupt country.

So much for Obama’s declaration that «the Afghan people must know that our commitment to their future is enduring» – because the Afghan people are suffering as they have never done before, from a vile concoction of a crooked, useless central government; a bunch of self-important and ignorant foreign meddlers; scores of brutal warlords who are dedicated only to expanding their enormously lucrative fiefdoms; and an insurrection by Taliban barbarians who are gaining ground and power even as you read this.

The next Washington war began in 2003 against Iraq, where there was not the slightest threat to US interests. Certainly, the country was ruled by a dictator, just like the ones who have ruled Saudi Arabia and other Gulf states for so long, but dictatorship doesn’t seem to worry Washington, providing the despots do what they’re told. Unfortunately for him, Saddam Hussain didn’t like taking orders and his country was invaded and he was hanged. A later target was the even more unfortunate Gaddafi of Libya whose country was subjected to an eight-month 10,000-airstrike blitz by US-NATO missiles, rockets and bombs until the war ended when Gaddafi was brutally murdered in October 2011, after which the likely next president of the United States, Hillary Clinton, «shared a laugh with a television news reporter» and joked that «we came; we saw; he died».

After Washington and its NATO minions had reduced Libya to a similar shambles as those in Afghanistan and Iraq, their attention turned to Syria, run by yet another dictator, but one who, like Saddam of Iraq, but unlike the despots of the Arabian Peninsula, permitted freedom of religion. (Saddam’s deputy prime minister was a Christian.) There was an uprising against President Bashar al-Assad whose country’s constitution specifies that «religious communities shall be protected and respected».

In August 2012, as part of the US campaign against Syria, President Obama declared that «I have indicated repeatedly that President al-Assad has lost legitimacy, that he needs to step down.» Yet the feudal monarchy of Bahrain is encouraged by Washington to flourish in spite of committing appalling human rights abuses. As reported by Amnesty International, Bahrain’s dictator, King Hamad bin Isa Al Khalifa, has «severely curtailed the rights to freedom of expression and association, and arrested and prosecuted political and religious activists who criticized the government». Unlike the illegally overthrown President Saddam of Iraq, he doesn’t have any Christians in his government.

There isn’t a word of criticism from the White House or the US Congress about the fact that the dictator Hamad authorises «torture… including electric shock, prolonged suspension in painful positions, severe beatings, threats to rape and kill, and sexual abuse» of his serfs. 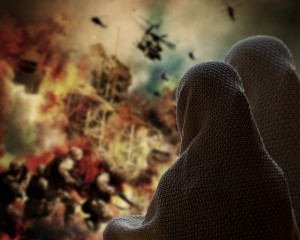 Why should President Assad be required to «step down» and be faced with US-supported rebel gangs intent on his removal and death while King Hamad remains safely on his throne?

The answer is that Hamad «plays a key role in regional security architecture and is a vital US partner in defence initiatives. Bahrain hosts the US Navy’s Fifth Fleet and participates in US-led military coalitions».

It’s fine to be a dictator if you help Washington in its wars. But if a dictator decides to be independent of US policy, then he runs the risk of being killed in a particularly horrible fashion while his country is reduced to smouldering chaos, resulting in millions of refugees and even greater expansion of terrorism.

President Obama’s proclamation that «America must always lead on the world stage» has had a major international impact. He wanted to take the hero’s role in world leadership, but through poor judgement has become the villain and is now trying desperately, with the enthusiastic assistance of the Pentagon and its war-happy Secretary Carter, to justify US military expansion by choosing and challenging new adversaries.

He has increased confrontation with China and Russia, but couldn’t have made a worse choice, because neither of these proud and ancient countries is going to bow to the self-appointed «one indispensable nation». Obama is moving the world closer to war, and his probable successor will do likewise. But if she thinks that she will ever be able to repeat her happy joke that «we came; we saw; he died», she is greatly mistaken.

This report prepared by BRIAN CLOUGHLEY for Strategic Culture Foundation.