The US will impose sanctions on Iran that could be the “strongest in history” after Washington pulled out of the 2015 nuclear deal with Tehran, US Secretary of State Mike Pompeo said Monday.

“We will apply unprecedented financial pressure on Iran. The leaders in Tehran will have no doubt about our seriousness,” Pompeo said in his first major foreign policy address since moving to the State Department from the CIA. 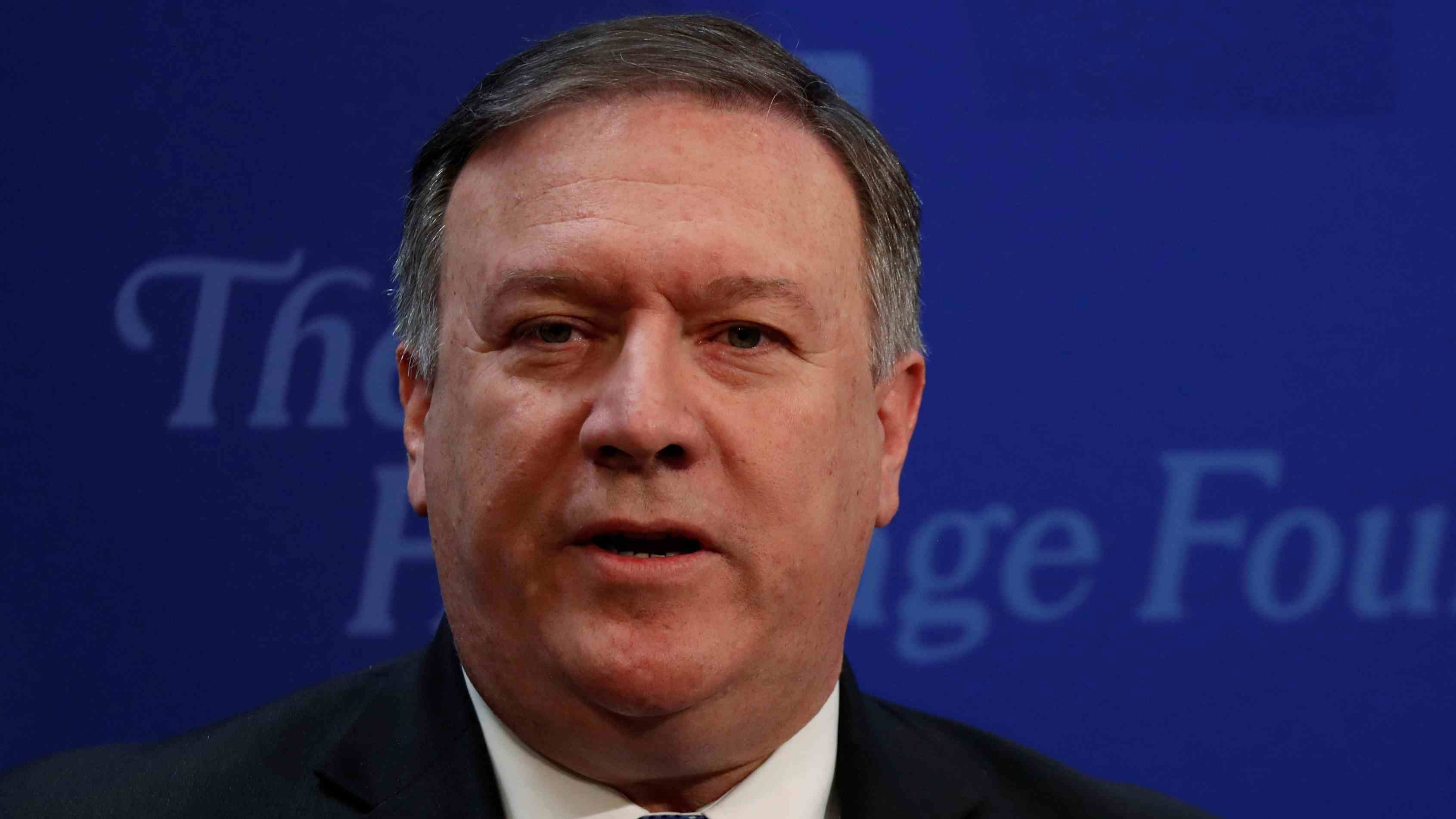 US Secretary of State Mike Pompeo delivers remarks on the Trump administration’s Iran policy at the Heritage Foundation in Washington, US, May 21, 2018. /Reuters Photo

Iran will be battling to keep its economy alive after the sanctions come into full force, Pompeo added.

“Iran will never again have carte blanche to dominate the Middle East,” he said in outlining the new US strategy on handling issues concerning the Iranian government, including 12 tough conditions from Washington for any “new deal” with Teheran.

Pompeo said if Iran were to abide by the stricter terms, including ending its ballistic missile program and its interventions in regional conflicts from Yemen to Syria, the United States would lift its sanctions.

“We will track down Iranian operatives and their Hezbollah proxies operating around the world and crush them,” Pompeo said. 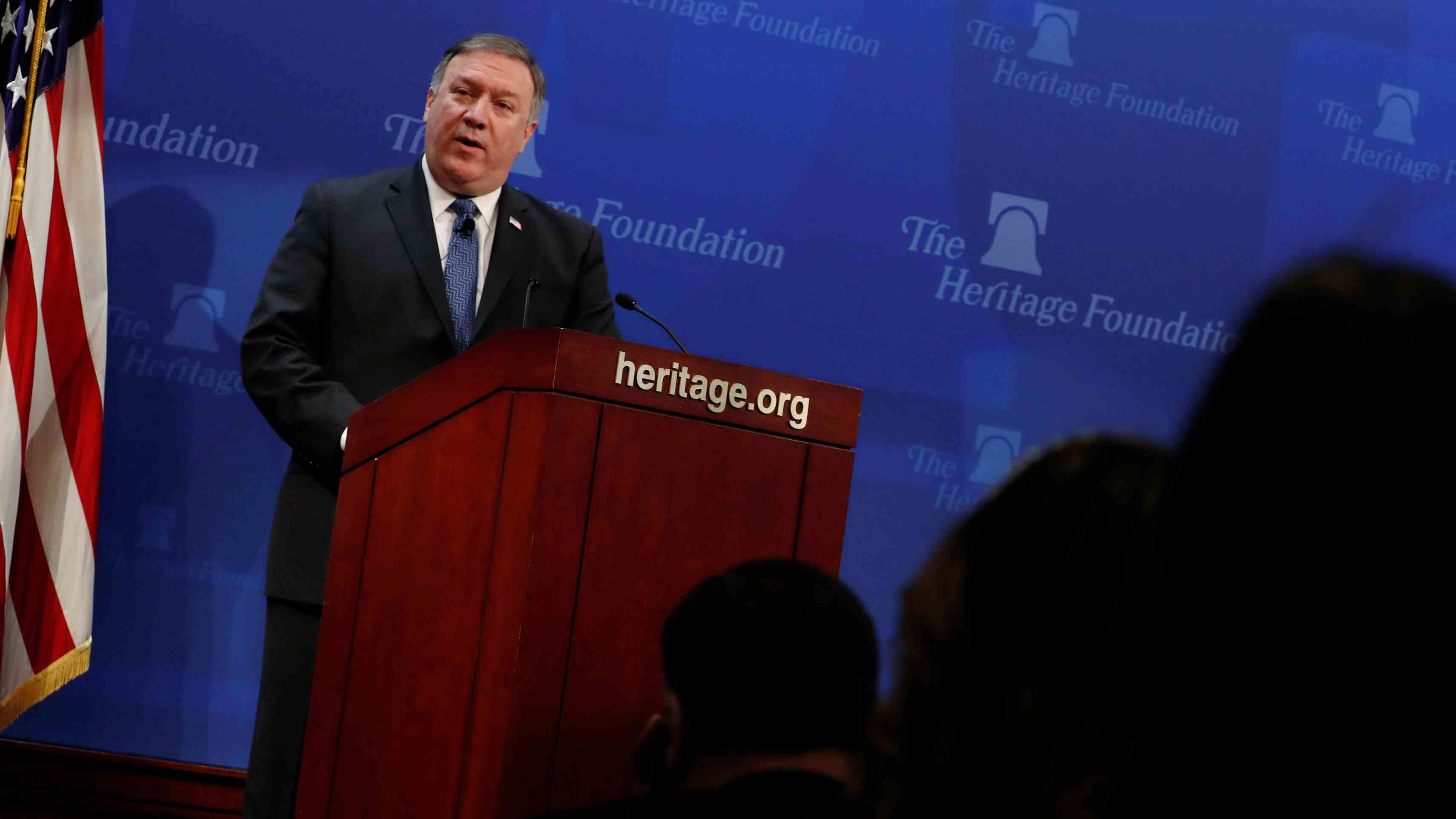 US Secretary of State Mike Pompeo delivers remarks on the Trump administration’s Iran policy at the Heritage Foundation in Washington, US, May 21, 2018. /Reuters Photo

“Iran will be forced to make a choice: either fight to keep its economy off life support at home or keep squandering precious wealth on fights abroad. It will not have the resources to do both.”

President Donald Trump has long said the original 2015 deal with Iran — also signed by Britain, China, France, Germany and Russia — did not go far enough, and now wants the Europeans and others to support his hardline strategy.

“In the strategy we are announcing today, we want the support of our most important allies and partners in the region and around the globe. I don’t just mean our friends in Europe,” Pompeo said.

The secretary of state also warned European businesses who work with Iran in violation of US sanctions that they will be held “to account.”

The re-establishment of the US sanctions will force European companies to choose between investing in Iran or trading with the United States.

In reality, there is no choice — European companies cannot afford to forsake the US market. 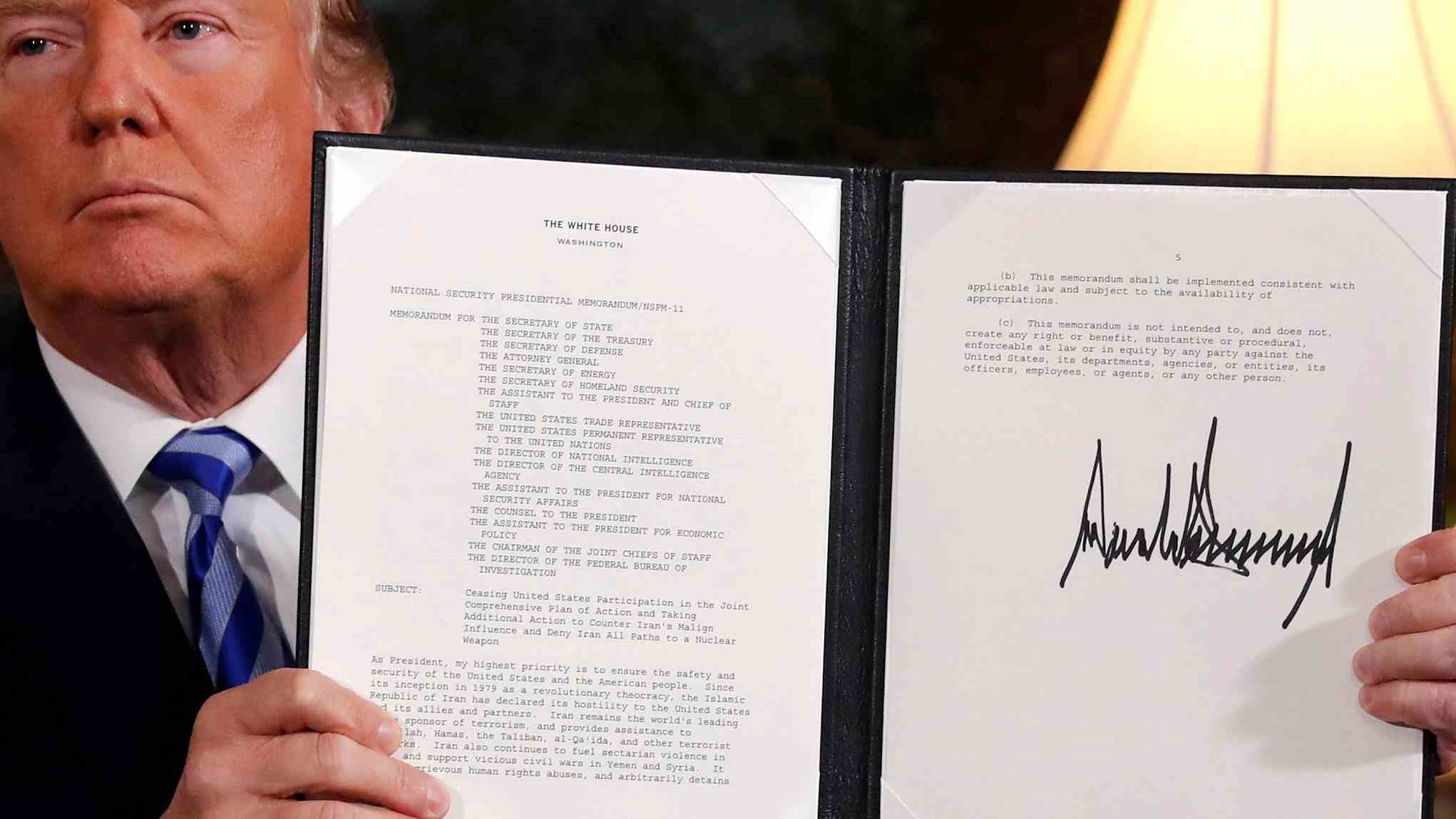 US President Donald Trump holds up a proclamation declaring his intention to withdraw from the JCPOA Iran nuclear agreement after signing it in the Diplomatic Room at the White House in Washington, US May 8, 2018. /VCG Photo

For now, the European Union is trying to persuade Iran to stay in the 2015 agreement, even without Washington’s participation.

What is the Iran nuclear deal?

US President Donald Trump announced on May 8 that Washington was pulling out of the Iran nuclear deal, agreed by world powers in 2015, and reimposing tough economic sanctions on Tehran.

The deal was struck on July 14, 2015 in Vienna, Austria by Iran and the so-called EU3+3 powers: EU members France, Germany and Britain, plus the US, Russia and China.

Known as the Joint Comprehensive Plan of Action (JCPOA), it was the culmination of a decade of talks aimed at reining in Iran’s nuclear program, and was welcomed as a historic move by its signatories.