US. President Donald Trump released his oft-delayed plan to end the Israeli-Palestinian conflict Tuesday, calling it “fundamentally different from past proposals” as doubts persist it will gain traction amid stiff Palestinian resistance.

“It is the most detailed proposal ever put out by far,” Trump said at the White House where he was hosting Israeli premier Benjamin Netanyahu. “Complex problems require nuance, fact-based remedies. That is why our proposal provides precise tactical solutions to make Israelis, Palestinians, and the region safer and much more prosperous.”

Among the details of Trump’s plan, Jerusalem will remain Israel’s “undivided capital,” Trump said, making light of tensions caused by his decision to recognize the contested city as Israel’s territory in December 2017.

“Under this vision, Jerusalem will remain Israel’s undivided capital. But that’s no big deal because I’ve already done that for you, right?” Trump said eliciting laughter from the assembled pro-Israel audience.

Trump briefed Netanyahu and Israeli opposition leader Benny Gantz on the 180-page peace plan, spearheaded by his son-in-law and special advisor Jared Kushner, at the White House on Monday. But Palestinian President Mahmoud Abbas has adamantly refused Trump’s requests for a phone call, according to a Palestinian official.

Abbas announced on several occasions his refusal of the U.S. plan as it does not address the issues of Jerusalem, refugees and borders. And ahead of its formal rollout, Palestinian officials rejected it out of hand, saying any plan that did not label Israel as an “occupying force” would be the “fraud of the century.”

The plan does not appear to meet even the most basic Palestinian demands for a comprehensive peace with Israel, including the right of return for Palestinian refugees who fled or were forced out of their homes as a result of conflict, as well as their descendants.

Regardless of where the Palestinian refugees fled from, they would be required under Trump’s plan to resettle within the future state of Palestine, the countries in which they currently live, or a third country. The plan does not allow for their resettlement within Israel, even if that is where they once lived and calls for “a complete end and release of any and all claims relating to refugee or immigration status.”

“There shall be no right of return by, or absorption of, any Palestinian refugee into the State of Israel,” it says, meeting yet another key Israeli demand.

Under international law, refugees are entitled to the voluntary return to their country of origin.

Thousands of protesters reportedly took to the streets in various parts of Palestine and Amman, Jordan in reaction to the plan’s formal rollout.

Palestinian officials have cut off communications with their U.S. counterparts since Trump decided to unilaterally recognize Jerusalem as Israel’s capital, undercutting a key pillar of peace talks which held the status of the contested city was to be determined through negotiations.

Trump has further shuttered the Palestinian diplomatic mission in Washington and cut off aid in a so-far unsuccessful bid to bring Palestinians to the negotiating table.

Trump said his proposal also requires the “firm rejection of terrorism” from Palestinians, and includes the recognition of a “contiguous” Palestinian state that would “double the Palestinian territory” over time once certain conditions are met. Israel would be granted sovereignty of the whole Jordan Valley in the eastern swath of the occupied West Bank.

Neither Palestinians nor Israeli would be uprooted from their homes, Trump claimed.

Trump released via Twitter a copy of his “conceptual map” for a two-state solution that included a greatly reduced Palestinian territory in the West Bank, which also included 15 “Israeli Enclave Communities” linked by Israeli access roads that cut through the envisioned Palestinian territory. That would recognize Israeli sovereignty over existing settlements, which are illegal under international law. 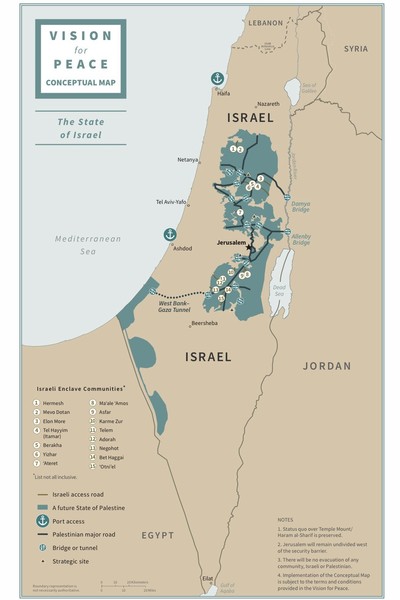 It further links the West Bank and the Gaza Strip by tunnel, but Gaza is not permitted port access. That is only allowed at the Israeli ports of Ashdod and Haifa.

It does apportion two bubble-like areas of the arid Negev desert to the future state of Palestine, linked to the Gaza Strip with small territorial corridors, however.

Netanyahu thanked Trump for the “‘fantastic deal,” saying he has agreed to “negotiate peace with the Palestinians on the basis of” the plan.

Trump’s announcement comes as he finds himself in the thick of an impeachment investigation that has gained steam after bombshell revelations from a former top aide, and as Netanyahu withdrew his request that Israel’s legislature vote on possible immunity from three graft cases he is facing amid a lack of support and political blowback ahead of March’s nationwide elections.

Netanyahu was formally indicted Tuesday on charges of corruption including bribery, fraud and breach of trust.

Ambassadors for the United Arab Emirates, Bahrain, Oman were in the audience but Palestinian representatives, who have denounced the plan, stayed away.

Palestinian President Abbas later said that “Jerusalem is not for sale.”

Details of the Middle East peace plan, dubbed “the deal of the century,” headed up by U.S. President Donald Trump’s son-in-law Jared Kushner, was kept tightly under wraps for the past two years.

Kushner, who worked on the project with administration advisers, launched the first stage of the peace plan in Bahrain in June. The Bahrain conference focused on the economic aspects of the long-delayed peace plan, with the declared aim of encouraging investment in the occupied Palestinian territories. It called for a $50 billion investment fund to boost the Palestinian and neighboring Arab state economies. The Palestinian leadership rejected the economic conference which ignored their political aspirations for an independent state, saying it was not consulted about the conference.

Many questions have been raised about why Trump has chosen this moment to present his plan, which has repeatedly been delayed by electoral uncertainty in Israel. Both Trump and Israeli Prime Minister Benjamin Netanyahu would like to divert attention away from their domestic troubles. Trump faces an impeachment trial while Netanyahu was indicted on corruption charges in November. Both deny wrongdoing. They also both face re-election campaigns – Netanyahu in March and Trump in November. Netanyahu tried twice and failed both times to secure a majority in the Israeli parliament last year. Trump has repeatedly delayed the launch of his plan to avoid causing election problems for Netanyahu because of the possibility it will require some concessions from Israel. He faces his own political clock and could not afford to wait for months for Israel to decide its next prime minister, according to a source familiar with the peace team’s thinking.

The chances of success for Trump’s peace plan remain low with Trump refraining from endorsing the two-state solution – the long-standing international formula to bring about peace by creating an independent Palestinian state co-existing with Israel. The U.N. and most nations around the world back this blueprint, the foundation of every peace plan for decades. However, Palestinians have been excluded from the peace plan by the U.S.

The Palestinian leadership said Washington can no longer be regarded as a mediator after a series of Trump decisions that delighted Israel but infuriated Palestinians. These included recognizing Jerusalem as the capital of Israel, moving the U.S. Embassy in Israel from Tel Aviv to Jerusalem and slashing hundreds of millions of dollars in humanitarian aid to the Palestinians. The cuts were widely seen as a means of pressuring the Palestinian leadership to come back to the negotiating table. So far, that has failed.

FATF a colonial tool as Pakistan on ‘Grey list’ but money...