At least 30 Afghan civilians and 16 Taliban fighters were killed in US air strikes in the Afghan province of Helmand, officials said on Wednesday, as Afghanistan’s president announced a team for prospective peace talks with the Taliban in Geneva.

Taliban and residents denied claims of Taliban casualties, however.

In the eastern part of the capital Kabul, Taliban insurgents on Wednesday staged a coordinated attack on a British security firm G4S, an Afghan official said, killing at least 10 people and wounding 19 others.

Afghanistan’s NATO-led force said Afghan government forces and US advisers came under fire from Taliban fighters in a compound in Garmsir district in southern Helmand province and called in an air strike, but the ground forces were not aware of any civilians in or near the compound.

“After the strike, there were secondary explosions, we assess from explosives inside the compound,” NATO said in a statement.

Attahullah Afghan, who heads the provincial council, said most of the casualties including men, women and children incurred in an air strike that hit a house on Tuesday night during military operations there.

A statement from governor’s office in Helmand confirmed that 16 Taliban insurgents were killed and said an investigation was underway to determine civilian casualties.

Qari Yusouf Ahmadi, a Taliban spokesman, claimed all the victims were civilians.

“Only one child was wounded, the rest were martyred,” relative of air strike victim, Mohammadullah said.

“Around 30 people have been killed…No, Taliban [fighters] were not among them.”

The fighting came as Afghanistan’s President Ashraf Ghani on Wednesday announced a 12-person team for peace talks with the Taliban.

The Afghan government, Western diplomats and UN officials have in recent weeks raised hopes of finally reaching a deal to end the Taliban’s 17-year insurgency.

At the international conference in Geneva, Ghani said his government had “formed a 12-person negotiating team, comprised of both women and men, and led by presidential chief of staff (Abdul Salam) Rahimi”.

The president also laid out what he termed a “roadmap” for the talks and four principles that he said must form the backbone of any agreement.

They include respecting Afghanistan’s constitution and the total rejection of interference in domestic affairs by foreign “terrorist” and criminal groups.

“We seek a peace agreement in which the Afghan Taliban would be included in a democratic and inclusive society,” Ghani said.

TRT World spoke with Helena Malikyar, a political analyst and historian, for more.

EU prepared to act as ‘guarantor’

US envoy Zalmay Khalilzad, who held talks with the Taliban in Qatar earlier this month, had been pushing Ghani to announce a team for prospective talks.

The European Union foreign affairs chief, Federica Mogherini, told the conference that the bloc believes “it is time for concrete talks about peace to begin”.

The EU is prepared to act as the “guarantor” of the negotiations, she added.

Ghani said earlier this month it was “not a question of if, but when” an agreement would be reached with the Taliban.

Khalilzad has said he is “cautiously optimistic” for an end to the conflict.

Earlier this month, a Taliban delegation in Russia said it will not hold direct talks with the Kabul government and will negotiate with the United States instead.

The meeting marked the first time the Taliban and Afghan government met for direct talks at a high level, in Moscow. 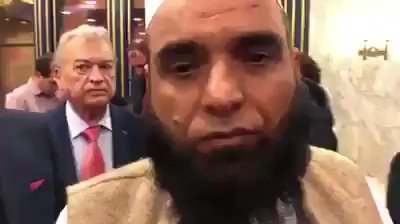 694 people are talking about this

A spokesman for Afghanistan’s Interior Ministry said at least 10 people have been killed and 19 wounded in a coordinated attack by Taliban insurgents that targeted a security firm in the eastern part of the capital Kabul.

Najib Danish said a suicide bomber detonated his explosives and then other insurgents started a gun battle with forces in the area.

Basir Mujahid, spokesman for the Kabul police chief, said the target of the attack was a security company called G4S. He said the company offers training for Afghan security forces.

Complex attack underway on military base of invaders named ‘Gorga’ in PD9 of #Kabul city.

The attack was response to recent enemy atrocities against civilians in #Kandahar, #Nangarhar & #Helmand.

All martyrdom seekers that have entered military base are alive & targeting enemy personnel.

Taliban claimed responsibility for the attack, saying it was in response to the “cruel” US air strike in Helmand that killed over two dozen civilians.

Police officers fined for getting a haircut during UK lockdown

France: Altaf Hussain Must be Charged says RSF to Britain

Police officers fined for getting a haircut during UK lockdown