British inflation unexpectedly jumped to its highest level in nearly four years in May, tightening the squeeze on consumers and complicating the job of the Bank of England, which has signalled it is in no hurry to raise interest rates.

British households are turning increasingly cautious about their spending due to the mix of low wage growth and rising inflation. And now they face the added worry of political uncertainty after last week’s inconclusive election.

The impact of the fall in the pound since last year’s Brexit vote made itself felt in Tuesday’s inflation data as the higher cost of foreign holidays and imported computer equipment and video games helped push up consumer prices by 2.9 percent, year-on-year.

That was its biggest increase since June 2013, the Office for National Statistics said, and was above the median forecast of 2.7 percent in a Reuters poll of economists.

It is also faster than pay growth for most people, who have suffered an income squeeze for most of the past decade.

Data due on Wednesday is likely to show basic pay was up by an annual 2.0 percent in the three months to April, according to another Reuters poll.

The pound fell slightly after the ONS data, possibly reflecting a slowing of the surge in prices faced by factories, which hints at slower inflation ahead for households. 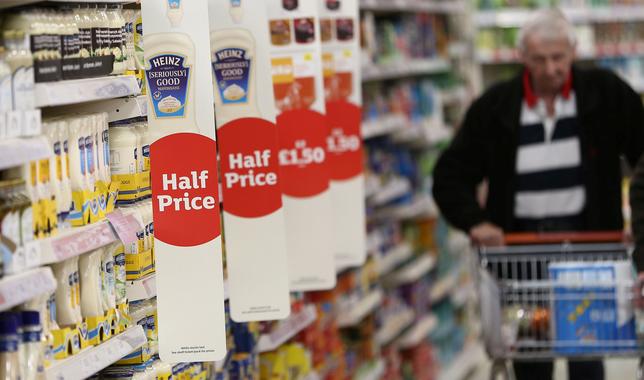 But later on it rose, recovering a fifth of its losses since the election, while British government bond prices suffered their heaviest one-day losses since January. [GBP/] [GB/]

“The Bank of England is in an increasingly difficult position,” Dominic Bryant, an economist with BNP Paribas, said.

The BoE has said it will tolerate inflation above its target of 2 percent because, so far, there has been no knock-on effect on pay, which could generate a longer-lasting inflation problem.

However, inflation is rising more quickly than the Bank was expecting, amid signs of a sharp slowdown in the British economy in early 2017.

Bryant said the BoE’s interest rate setters might choose to use a policy statement on Thursday to remind investors that they could move sooner to raise borrowing costs than the 2019 date that economists are mostly expecting.

On the other hand, Britain’s political turmoil may make the BoE more cautious about considering a rate hike, and some economists have said it could even revive its massive bond-buying programme if the economy weakens further.

Inflation has picked up speed around the world but in Britain there is extra pressure from the fall in sterling, which contributed to the slowdown in economic growth this year.

Credit card firm Visa said on Monday it had seen the first annual fall in consumer spending in nearly four years in May.

Last week’s shock election result, which has raised questions about how May will advance her plans to take Britain out of the European Union, and push other legislation, has hurt business confidence.

The BoE might take some comfort from some of Tuesday’s data, which showed inflationary pressures might be easing.

Input prices for factories fell by 1.3 percent in month-on-month terms in May, taking the yearly rate of price growth down to 11.6 percent from a downwardly revised 15.6 percent in April, its slowest annual growth rate since last September.

Growth in prices charged by factories held steady at an annual 3.6 percent, in line with the Reuters poll.