HomeAll ArticlesUK economy picks up in late 2016 but signs of Brexit hit...
All ArticlesFeaturedHotNews

LONDON Britain’s economy sped up at the end of 2016, data showed, but over the whole year it was weaker than previously thought and there were signs that the Brexit vote will increasingly act as a brake on growth in 2017.

The figures are likely to reinforce finance minister Philip Hammond’s view that there is no case right now to borrow more to help the economy when he announces his annual budget on March 8.

But he will keep a close eye on warning signs in Wednesday’s data.

The ONS also trimmed its estimate for 2016 growth to 1.8 percent from 2.0 percent, due to businesses stockpiling fewer goods and materials in early 2016. 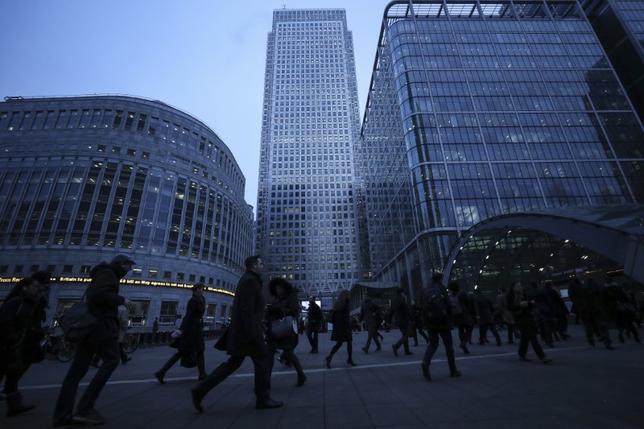 Workers walk to work during the morning rush hour in the financial district of Canary Wharf in London, Britain, January 26, 2017. REUTERS/Eddie Keogh

Angus Armstrong, director of macroeconomics at the National Institute of Economic and Social Research, said the familiar pattern of consumers driving the economy was likely to fade.

“The UK economy needs another driver if it is not to have a significant slowdown in 2017,” he said. “The pattern of strong consumer spending and weaker business investment can only be a limited one.”

Firms are expected to rein in their investment plans as Britain negotiates its departure from the EU, a process that Prime Minister Theresa May is due to kick off in coming weeks.

The outlook for wages is key for spending by households who have driven Britain’s economy since the Brexit   vote. Wednesday’s data showed compensation of employees edged up by 0.1 percent in the fourth quarter, the weakest rise in more than three years.

The ONS said household spending increased 0.7 percent on the quarter, slowing from 0.9 percent in the third quarter and marking the weakest growth in a year.

Bank of England deputy governor Minouche Shafik said after the data that the central bank still expected overall economic growth this year of 2.0 percent, much stronger than most economists polled by Reuters expect.

But the bank also predicts a growing squeeze on consumers as inflation rises due to the pound’s fall since June’s vote to leave the European Union.

There are signs this has started. Data last week showed retail sales fell in each of the three months to January.

The BoE this month signaled that it is in no hurry to raise interest rates with so much Brexit-related uncertainty ahead.

The central bank expects the economy to grow at a slower pace in subsequent years than if Britain had voted to stay in the EU.

I want to be a Tea Master: Elif Gonlum