TRURO, England (Reuters) – Victims of acid attacks in Britain are calling on the government to enforce longer prison sentences and tighten controls on the sale of corrosive substances, after a jump in the number of cases last year and in 2017.

The issue hit headlines after a recent spate of attacks, including one in June in which two cousins were doused with acid through a car window as they were out celebrating a birthday, prompting Interior Minister Amber Rudd to review legislation.

There have been several acid attacks in London since, from robberies to gang-related violence.

The Home Office said it planned to set out guidance for prosecutors on classifying corrosive substances as dangerous weapons and to review sentencing guidelines.

“Other key actions will include a review of the Poisons Act to assess whether it should cover more acids and harmful substances and further work with retailers to agree measures to restrict the sales of acids and other corrosive substances,” said Sarah Newton, minister for crime, safeguarding and vulnerability.

For victims like 32-year-old Andreas Christopheros, who was assaulted at his home in 2014, that may bring little comfort. But he joins a chorus of acid attack survivors demanding that tough words become reality.

“I believe the UK has got its strategy towards this completely wrong,” he told Reuters at his home in Truro, a seaside town in southwest England.

“I strongly believe that the sentencing for anyone who carries out any form of acid attack, whether their intended victim is injured badly or not, should serve a life sentence, with a minimum term of 20 or more years.”

There is no clear explanation for the rise, but it coincides with a crackdown on weapons including the “two strikes” rule requiring a mandatory minimum

sentence of six months for people convicted of carrying a knife for the second time.

Jaf Shah, executive director of London-based non-profit Acid Survivors Trust International, described a “loophole” in the law whereby people possessing acid would not be charged but those carrying a gun or a knife could.

“There just aren’t appropriate levels of controls around acid,” Shah said. “If you are caught with acid, police have to prove intent, which is very difficult.”

Christopheros’ ordeal began in December, 2014, when he answered a knock on the door thinking it was a courier bringing Christmas presents. Instead, a man he had never seen before threw a beaker of sulphuric acid in his face, saying: “This is for you, mate.”

“My t-shirt disintegrated from top to bottom, it just rolled away into nothing. The pain was inexplicable,” he said in the same house, where he still lives with his wife and four-year-old son.

He was rushed to hospital where doctors told his wife and mother he may not live through the night. He said he was on “death watch” for weeks because of the risk of infection.

Ninety percent of Christopheros’ face has been reconstructed using skin from other parts of his body, including his scalp and neck. He has had between ten and twelve surgeries and will need more, he said.

He has lost his eyelids three times as the scarring on his face contracts, making sleep a constant struggle.

“Not having eyelids has probably been the most torturous thing that I’ve been through,” he said. “You can’t hide from the light. You can’t shut your eyes.”

Christopheros said the attack was a case of mistaken identity, as his assailant believed he had carried out a sexual assault on a family member but arrived at the wrong house.

After pleading guilty, his attacker was initially sentenced to life in prison with a minimum term of eight years.

Christopheros later learned the assailant was granted an appeal, lifting his life sentence and changing his sentence to 16 years with a possibility of parole after eight.

“Three judges ended up concluding that life should be lifted from his sentence because he’s deemed not to be a danger to society, which is probably the most baffling part of the whole story,” Christopheros said. “It was a planned attack.”

Corrosive substances are often found in household products like drain or toilet cleaners and can easily be purchased in shops using cash.

“A litre would be enough to destroy a dozen people’s lives, maybe more. Anyone can buy that,” Christopheros said.

Injuries suffered by victims of attacks using corrosive substances can require hundreds of surgeries and years of recovery, plastics surgeons who have worked on British acid attack survivors said.

Even after extensive treatments, victims typically have scars for the rest of their lives.

“Sometimes people never recover if they have lifelong disfigurement and deformity,” said Professor Peter Dziewulski, spokesman for the British Association of Plastic, Reconstructive and Aesthetic Surgeons.

Christopheros has had to cut back work as a local entrepreneur significantly as a result of his injuries.

“The ultimate repercussions for an acid attack are lifelong,” he said. 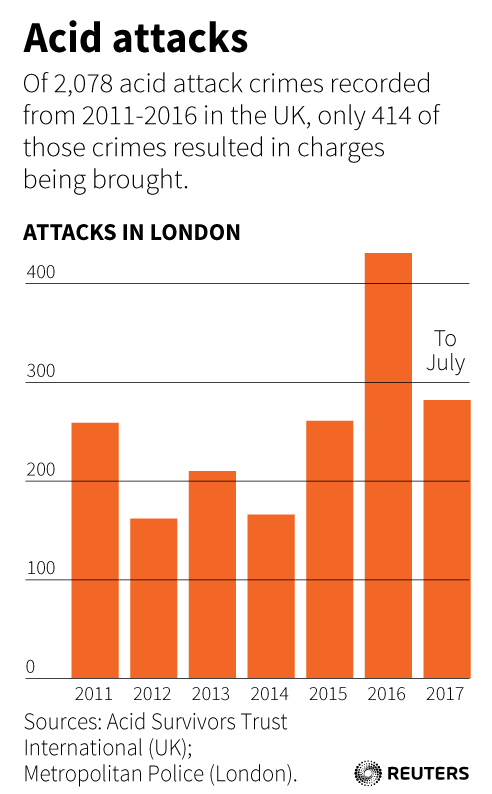 Over 8 million Kashmiris living in largest open-air prison controlled by...

Macron steps back after protests from Muslim world