Some influential citizens of the Gulf country lashed out at the Modi government for giving a free run to far-right Hindu extremists, who have engaged in violence against Muslims, entertaining genocidal fantasies.

Islamophobic comments made by Indian nationals working for the UAE have created a perfect political storm, leading some top Emirati figures to issue a warning to the South Asian professionals in the Gulf’s rich Muslim country.

“The ruling family is friends with Indians, but as a royal your rudeness is not welcome,” wrote Princess Hend Al Qassimi, a member of the UAE royal family, on Twitter, referring to both the countries’ warm relations and Islamophobic attacks.

“All employees are paid to work, no one comes for free. You make your bread and butter from this land which you scorn and your ridicule will not go unnoticed,” the Princess warned.

The Princess’ tweet came as a response to Islamophobic social media posts by an Indian-origin employee in the UAE. The Princess also expressed her dismay over changing social reality in India, where the Hindu-majority has been pitted against Muslims, who are in a minority, intensifying the climate of hatred.

Millions of expats from India are working across the Gulf, from the UAE to Saudi Arabia and other countries.

In recent weeks, an increasing number of Indian professionals have been reportedly fired and forced to leave the UAE for posting Islamophobic messages on social media.

It’s an interesting turn of events between the two friendly countries.

But since then, a lot of things have changed.

India’s Muslim minority had been on the streets until the deadly outbreak hit the country alongside fellow Indians of other faiths, protesting the country’s controversial citizenship law, which eased the citizenship path to those other than Muslims living in countries of Bangladesh, Pakistan and Afghanistan.

India has had no hesitation in brutally cracking down on protesters, despite Islamophobic attacks across the country making life unbearable for the Muslim minority.

The anti-Muslim remarks on Twitter passed by Indian nationals living in the Gulf country is now forcing the citizens of the rich Gulf state to rethink about their relations with the South Asian state.

There are also some indications that a number of Arab celebrities in the UAE are likely to launch a campaign to challenge India’s anti-Muslim acts of aggression. 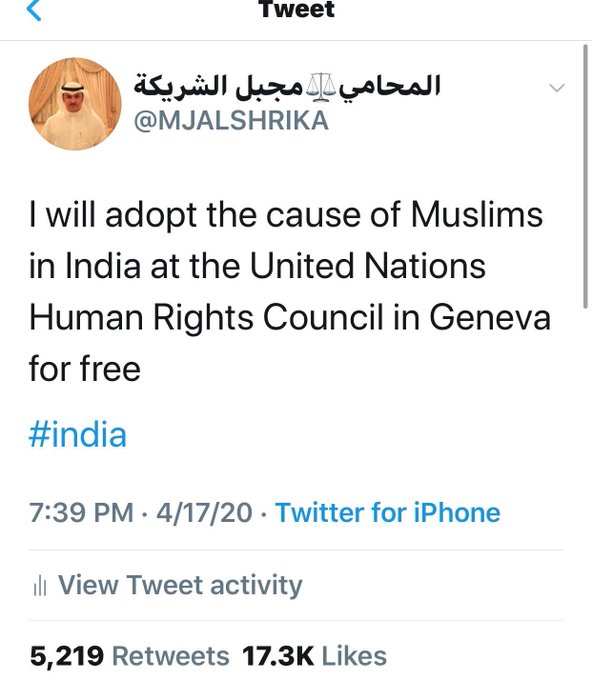 Increasing Islamophobia in India refreshed some bad memories in the Arab world.

“95 percent of Arab women have never had an orgasm in the last few hundred years! Every mother has produced kids as an act of sex not love,” tweetedTejasvi Surya, one of the deputies of Modi’s rightwing BJP, several years ago.

Feeling the political heat, Modi tried to calm things out, playing the diversity card to distract India’s critics in the Gulf.

“Covid-19 does not see race, religion, colour, caste, creed, language or borders before striking. Our response and conduct thereafter should attach primacy to unity and brotherhood. We are in this together,” wrote Modi on Twitter on Sunday.

In what looked like a double whammy, the Modi government received another criticism from the 57-member Organisation of Islamic Cooperation (OIC) for increasing Islamophobic attacks in the country, where some Hindu nationalists have continued to blame Muslims for the spread of the coronavirus outbreak.

“[We] urge the Indian Govt to take urgent steps to stop the growing tide of Islamophobia in India and protect the rights of its persecuted Muslim minority as per its obligations under international Human Rights law,” urged OIC’s Independent Permanent Human Rights Commission in a statement.