US President Donald Trump is staying at his resort in Turnberry in western Scotland amid anti-Trump protests and allegations over Russian meddling into the 2016 election.

Some 10,000 people marched on Saturday through the Scottish capital of Edinburgh to protest US President Donald Trump, while police tried to find a paraglider who breached a no-fly zone and flew a protest banner over the golf resort where Trump is staying.

The glider carried a banner reading “Trump: Well Below Par” over Trump’s Turnberry golf resort in western Scotland on Friday night to protest his environmental and immigration policies.

Greenpeace, in a statement, claimed the protest forced the president to take cover, saying “as the glider appears overhead the president can be seen making for the entrance breaking into a trot.”

Trump and his wife, Melania, were spending the weekend out of the spotlight at his Turnberry resort, ahead of his high-stakes summit on Monday with Russian President Vladimir Putin in Helsinki, Finland.

Greenpeace said it had informed police about the stunt 10 minutes before the glider arrived.

In Edinburgh, a police helicopter almost drowned out the chants of the protesters, who plan to launch into the sky the giant “Baby Donald” balloon — depicting the president as an angry orange baby. 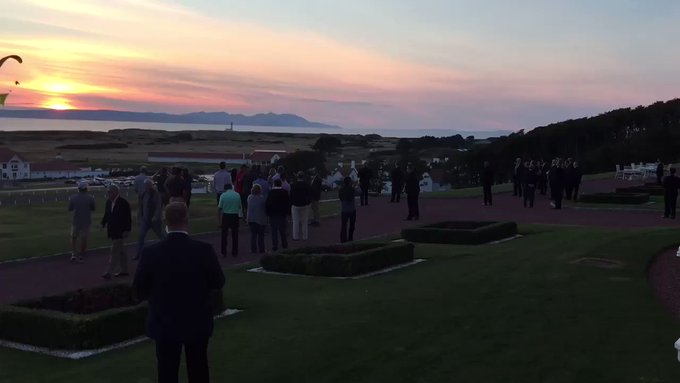 Protesters were starting to gather in the Meadows, a large park in the city.

A 6-metre inflatable depicting Trump as a screaming baby floated above the protesters.

Anti-fascist groups and political activists were joined by many others who said they had never demonstrated before.

The same balloon flew over anti-Trump protests in London on Friday, when thousands crammed the streets of the British capital to vent their anger over Trump’s first official visit to Britain.

Jonathon Shafi, of the group Scotland Against Trump, said he wanted to show solidarity with Americans against Trump.

“It’s not acceptable that a president talks about grabbing women, separates children from their families and gives encouragement to fascist, racists, misogynists and homophobes,” he said.

“We are not anti-American, just against Trump and his divisive regime”.

Eli Roth, 56, from California but living in Edinburgh, said he doubts the US president will take notice.

“I don’t think anything gets the message across to Trump, but I hope demonstrations like these encourage people in the States to fight the Trump regime,” he said.

“We need to show that there are people outside America who care about what is happening and that Trump has a global impact.”

Earlier on Saturday, Trump said he hoped to play golf at his course in Scotland ahead of a summit with Putin that could be overshadowed by accusations that Russians meddled in the US 2016 election.

Trump apologised to May for the furore over his withering public critique, blaming “fake news” and promising instead a bilateral trade agreement with Britain after it leaves the EU in March.

After meeting the queen at Windsor Castle, Trump headed to Scotland, where his mother, Mary Anne, was born and where he owns a golf course, before his Monday meeting in Helsinki with Putin.

“Will be at Trump Turnberry for two days of meetings, calls and hopefully, some golf – my primary form of exercise!” Trump said on Twitter.

Trump has repeatedly said the investigation into suspected Russian interference in the 2016 US election – which he casts as a “rigged witch hunt” – makes it hard for him to do substantive deals with Moscow.