Guests at a Brazilian wedding saw triple when three identical sisters got married in a one-of-a-kind ceremony.

Triplets Tagiane, Rocheli and Rafaela Bini share the same birthday, the same features and now the same wedding anniversary after they wed their partners at Catedral Nossa Senhora Aparecida in Passo Fundo, on March 21.

The 29-year-olds all wore the same style of dress, the same hairstyle and the same make up on their special day. The only point of difference between the three brides was their colourful bouquets.

Wedding photographer Diovane Moraes described the wedding as “special and one-of-a-kind” and said there were over 600 guests, reports ABC News.

The pews at the Nossa Senhora Aparecida were moved apart to allow more space for the three brides to walk down the aisle together, reports the Daily Mail.

The trio were followed by 18 bridesmaids and pageboys, who were dressed in either yellow, blue or red, depending on which bride they were representing. 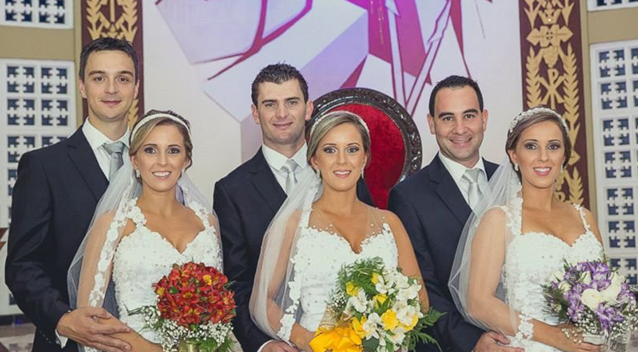 The different coloured bouquets were how many guests distinguished between the three brides. Photo: Diovane Moraes/Everton Rosa Associados.

‘I tried to hold back my emotion, but I couldn’t. To see my dad there, at that moment, was a feeling I can’t explain,” she said, according the Daily Mail.

Guests who had trouble telling the brides apart will be comforted to know that even their husbands have found the task difficult.

Rafael who married Rafaela admitted that in the past he had accidentally hugged her sister Rocheli from behind, reports the Daily Mail. 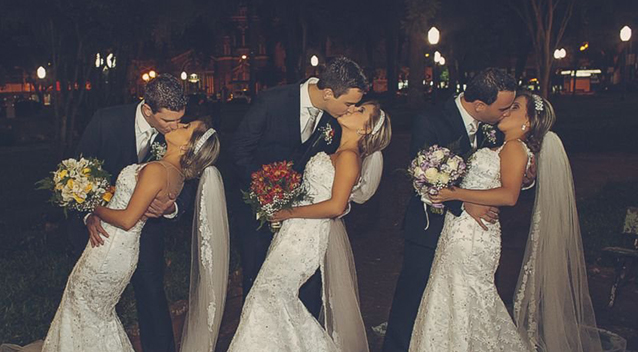 The brides wore the same dress and styled their hair and make up the same way. Photo: Diovane Moraes/Everton Rosa Associados.

However the men insisted that they had no problem differentiating between their brides on the big day.

‘Oh yes, I knew which one was mine, for sure. I knew as soon as she entered the church, she was the most beautiful,’ said Eduardo.