Turkey, Iran and Russia on Friday called for a political solution to the crisis in Syria in a joint statement issued at the end of a trilateral summit in the Iranian capital Tehran.

The presidents of Iran, Russia and Turkey met in a high stakes summit in Tehran on Friday to discuss the future of Syria as a bloody military operation looms in the last opposition and rebel-held area of the war-ravaged nation.

Each leader laid out terms and issues on the battlefield which are most critical to their own concerns.

A joint statement released by all three leaders after the summit said:

“There could be no military solution to the Syrian conflict and it can only end through a negotiated political process.

“Reaffirmed their determination to continue active cooperation with a view to advancing the political process in consistence with the decisions of the Syrian National Dialogue Congress in Sochi and the UN Security Council Resolution 2254.”

#Turkey #Russia and #Iran mutual statement after the summit in Tehran. Next meeting will be held in Russia. pic.twitter.com/axilSYj9A0 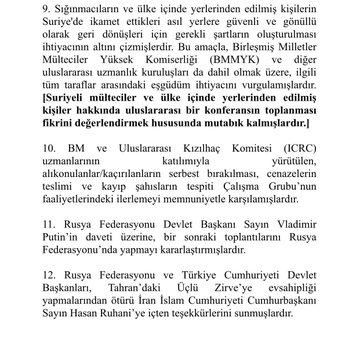 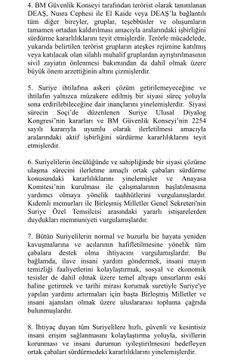 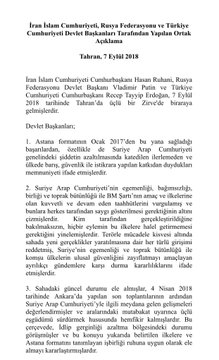 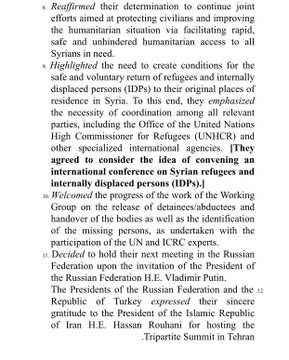 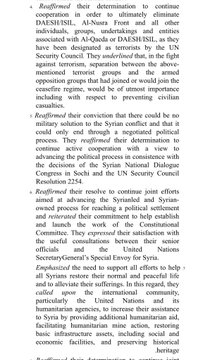 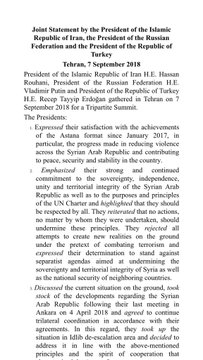 The leaders expressed their “satisfaction with the achievements” of the Astana-styled talks since January 2017, in particular, the progress made in “reducing violence across the Syrian Arab Republic and contributing to peace, security, and stability in the country.”

Turkey’s president Recep Tayyip Erdogan appealed for a ceasefire in Syria’s Idlib, saying a regime offensive in the northwestern province would unleash a humanitarian catastrophe and be a national security threat to his country.

“A migration wave started again and the place they are going to is always the Turkish border. They are now coming towards our borders. We should provide a ceasefire here, taking measures against terrorist organisations together with the joint work of our relevant officials,” Erdogan said.

“If we can declare a ceasefire here today, this will be the most important step we can take. It would bring peace to the civilians. I think declaring a ceasefire would be a victory for this summit.”

His call appeared to be at odds with statements by Russian President Vladimir Putin who said the Syrian regime “has the right” to regain control over all Syrian territory, including Idlib.

The two leaders, along with Iranian President Hassan Rouhani spoke at a summit meeting in Tehran to discuss the future of Syria as a bloody military operation looms in the last opposition and rebel-held area of the war-ravaged nation.

“Idlib isn’t just important for Syria’s future, it is of importance for our national security and for the future of the region,” Erdogan said.

“Any attack on Idlib would result in a catastrophe. Any fight against terrorists requires methods based on time and patience,” he added, saying “we don’t want Idlib to turn into a bloodbath.”

“We must find a reasonable way out for Idlib,” he added.

Putin reiterated Russia’s stance that Assad’s regime should be able to regain control of all of Syria.

“We should think together over all aspects of this complicated issue,” Putin said, speaking of Idlib. “We should solve this issue together and (we should) all realise that the legitimate Syrian government has the right and eventually should be able to regain control of all of its territory.”

Reacting to Erdogan’s proposal for the joint communique to call for a ceasefire in Idlib, Putin said “a ceasefire would be good” but indicated that Moscow does not think it will hold.

For his part, Rouhani demanded an immediate withdrawal by American forces in the country, which the other leaders agreed with.

The US has some 2,000 troops in Syria. He added that “we have to force the United States to leave.”

“The fires of war and bloodshed in Syria are reaching their end,” Rouhani said, while adding that terrorism must “be uprooted in Syria, particularly in Idlib.”

Each of the three nations has its own interests in the years-long war in Syria.

Iran wants to keep its foothold in the Mediterranean nation neighbouring Israel and Lebanon.

Turkey, which backed opposition against the Syrian regime’s Bashar al Assad, fears a flood of refugees fleeing a military offensive and destabilising areas it now holds in Syria.

And Russia wants to maintain its regional presence to fill the vacuum left by America’s long uncertainty about what it wants in the conflict.

Northwestern Idlib province and surrounding areas are home to about three million people, nearly half of them civilians displaced from other parts of Syria.

That also includes an estimated 10,000 hardcore militants, including those linked to Al Qaeda.

For Russia and Iran, both allies of the Syrian regime, retaking Idlib is crucial to complete what they see as a military victory in Syria’s civil war after Syrian troops recaptured nearly all other major towns and cities, largely defeating the rebellion against Assad.

A bloody offensive that creates a massive wave of death and displacement, however, runs counter to their narrative that the situation in Syria is normalising, and could hurt Russia’s longer-term efforts to encourage the return of refugees and get Western countries to invest in Syria’s post-war reconstruction.

For Turkey, the stakes couldn’t be higher. Turkey already hosts 3.5 million Syrian refugees and has sealed its borders to newcomers.

It has also created zones of control in northern Syria and has several hundred troops deployed at 12 observation posts in Idlib.

A regime assault creates a nightmare scenario of potentially hundreds of thousands of people, including militants, fleeing toward its border and destabilising towns and cities in northern Syria under its control.

Naji al Mustafa, a spokesman for the Turkey-backed National Front for Liberation, said on Friday his fighters were prepared for a battle that they expect will spark a major humanitarian crisis.

“The least the summit can do is to prevent this military war,” he said.

Earlier on Friday, a series of air strikes struck villages in southwest Idlib, targeting rebel posts and killing a fighter, said Rami Abdurrahman, the head of the Britain-based Syrian Observatory for Human Rights.

Race to succeed May begins with ten candidates nominated