The presidents of Russia, Iran and Turkey held their second three-way meeting on Wednesday, confirming their commitment to achieving a “lasting ceasefire” in Syria amid uncertainty about the future role of US forces in the country.

Read more: Trump agrees to keep US troops in Syria a ‘little longer’

The three leaders issued a joint statement after their summit in Ankara, stressing that they were determined to “speed up efforts to ensure calm on the ground” in Syria.

President Recep Tayyip Erdogan, Russian President Vladimir Putin and Iranian President Hassan Rouhani reaffirmed their resolve to drive “terrorists” out of Syria and find a political solution to bring peace back to the region. 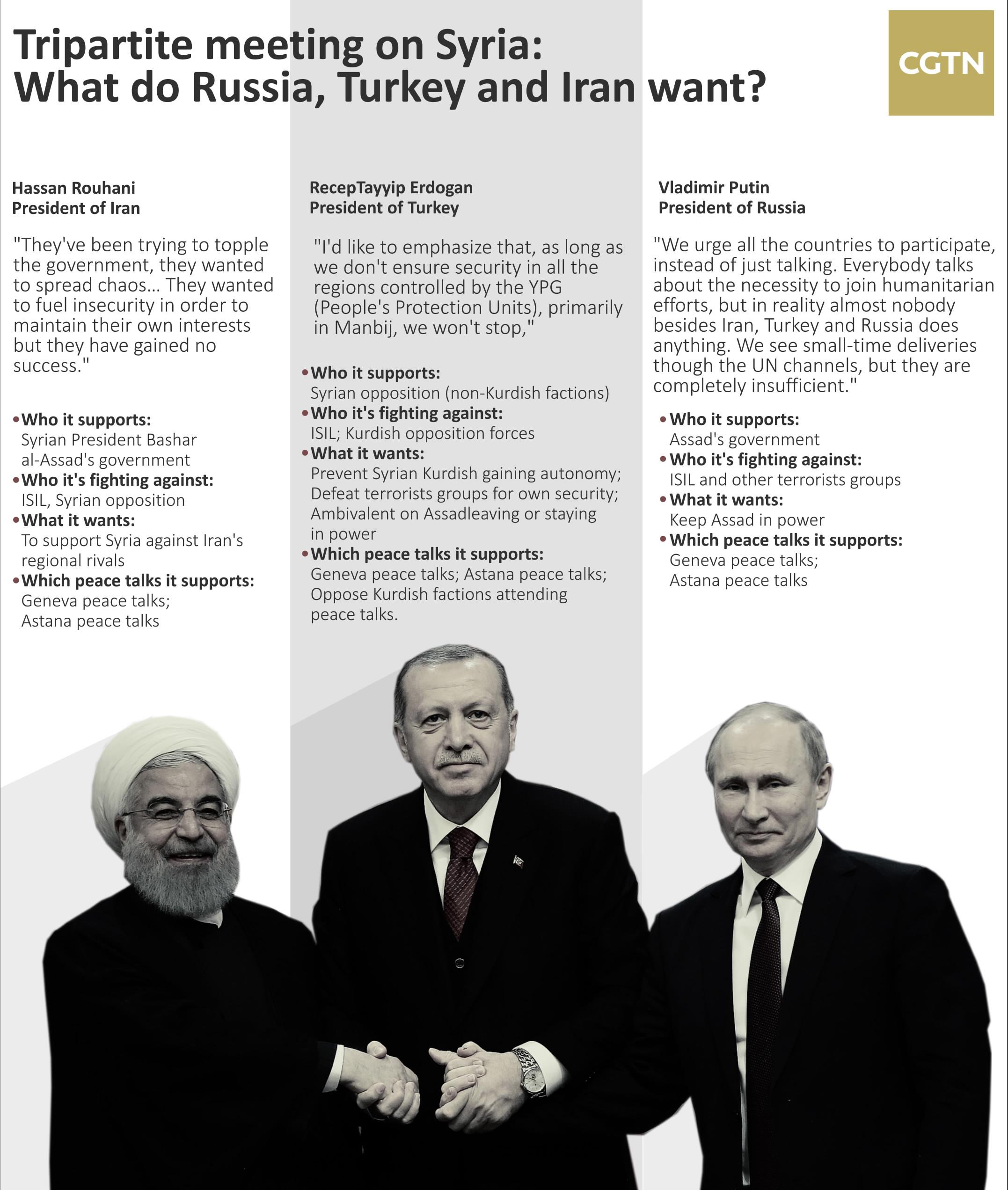 The joint statement said the three countries will “continue their active cooperation on Syria for the achievement of a lasting ceasefire between the conflicting parties and advancement of the political process envisaged by the UN Security Council Resolution 2254.”

Three leaders described “the defeat of the terrorist remnants in Syria” as a “common strategic goal.”

At a joint press conference following the summit, Putin said, “As our common strategic goal, we see the final defeat of the terrorists, who do not abandon attempts to destabilize the situation on the ground and are trying to undermine the peace process efforts.”

Although the joint statement did not identify forces behind the separatists in Syria, Rouhani blamed the US and Israel for bringing chaos to the region during the news conference. 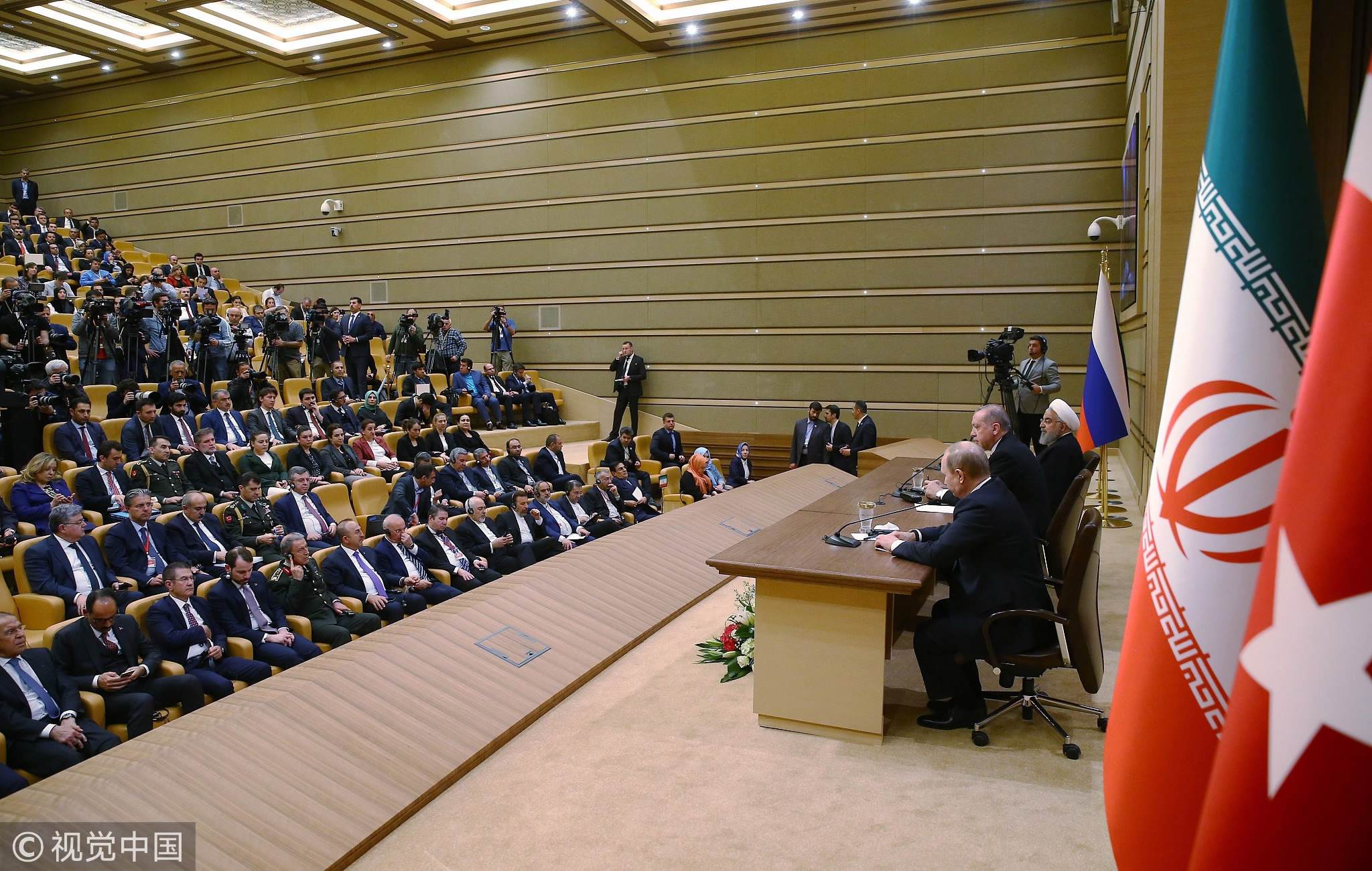 “They’ve been trying to topple the government; they wanted to spread chaos… They wanted to fuel insecurity in order to maintain their own interests but they have gained no success.” Rouhani said, adding that the “illegal US presence and military intervention in Syria” are meant to ultimately lead to the “fragmentation of the country.”

Erodgan was adamant that “we all know who benefits” from terrorism and separatist activities in Syria and stated a commitment to drive Kurdish militias away from the country’s borders.

However, experts pointed out the three countries actually have policy differences in Syria and said that made the meeting fruitless.

“From the beginning, this triangular alliance between Moscow, Ankara, and Tehran, is an alliance of convenience,” said Marc Pierini, former European Union ambassador to Turkey, Syria, Libya, and Tunisia. “It is very unusual because of the divergent interests (they have).” 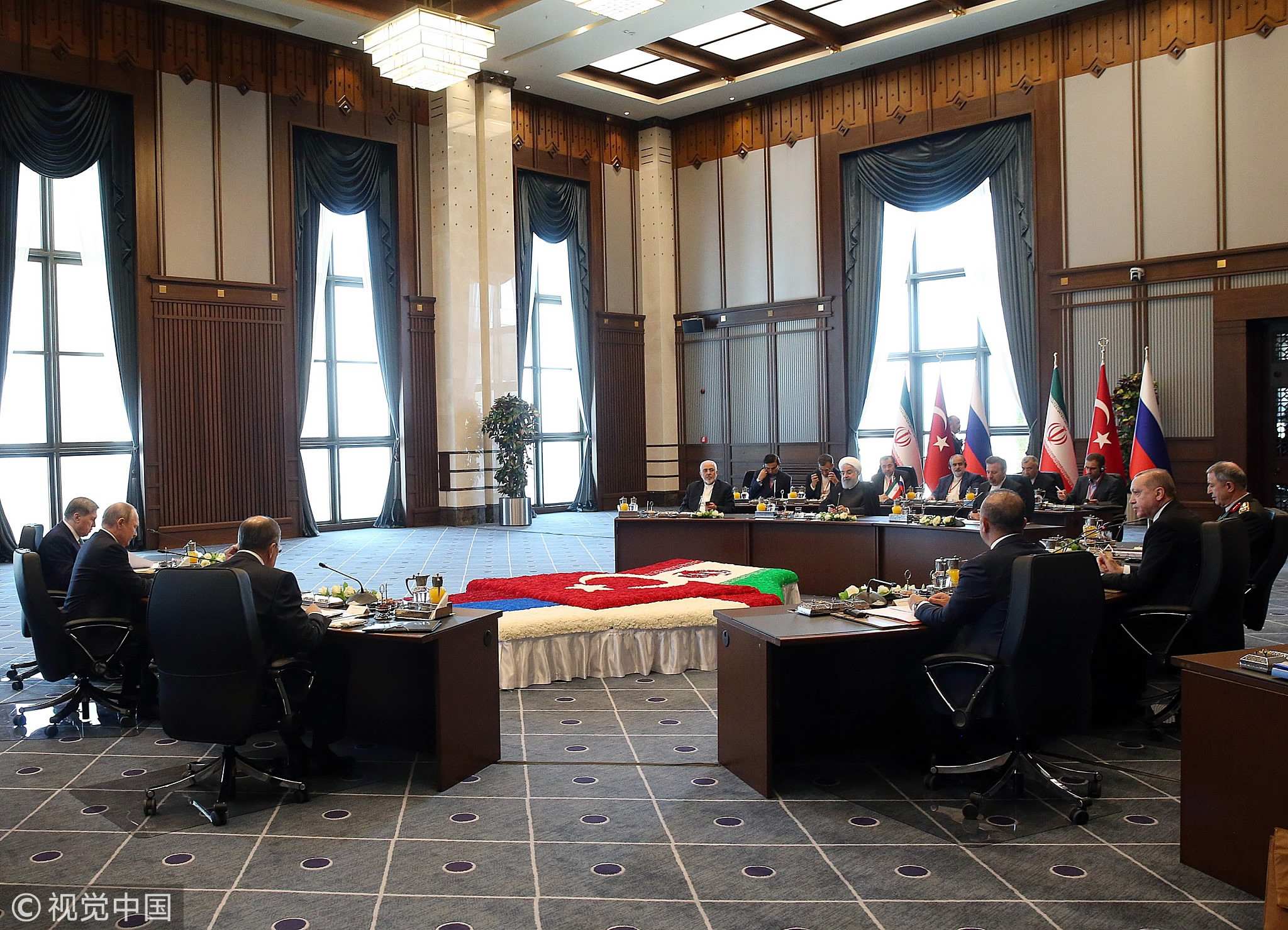 Patrick Clawson, director of research at the Washington Institute for Near East Policy, saw the summit as an inconsequential meeting with many differences. “They’re (three leaders) certainly not going to tell one another what’s really on their minds,” Clawson observed.

The tripartite meeting was the presidents’ second try after they met in Sochi last November, when they agreed to hold a Syrian peace congress that sought to bring the country’s government and opposition to the bargaining table in Sochi from January 29 to 30, 2018. 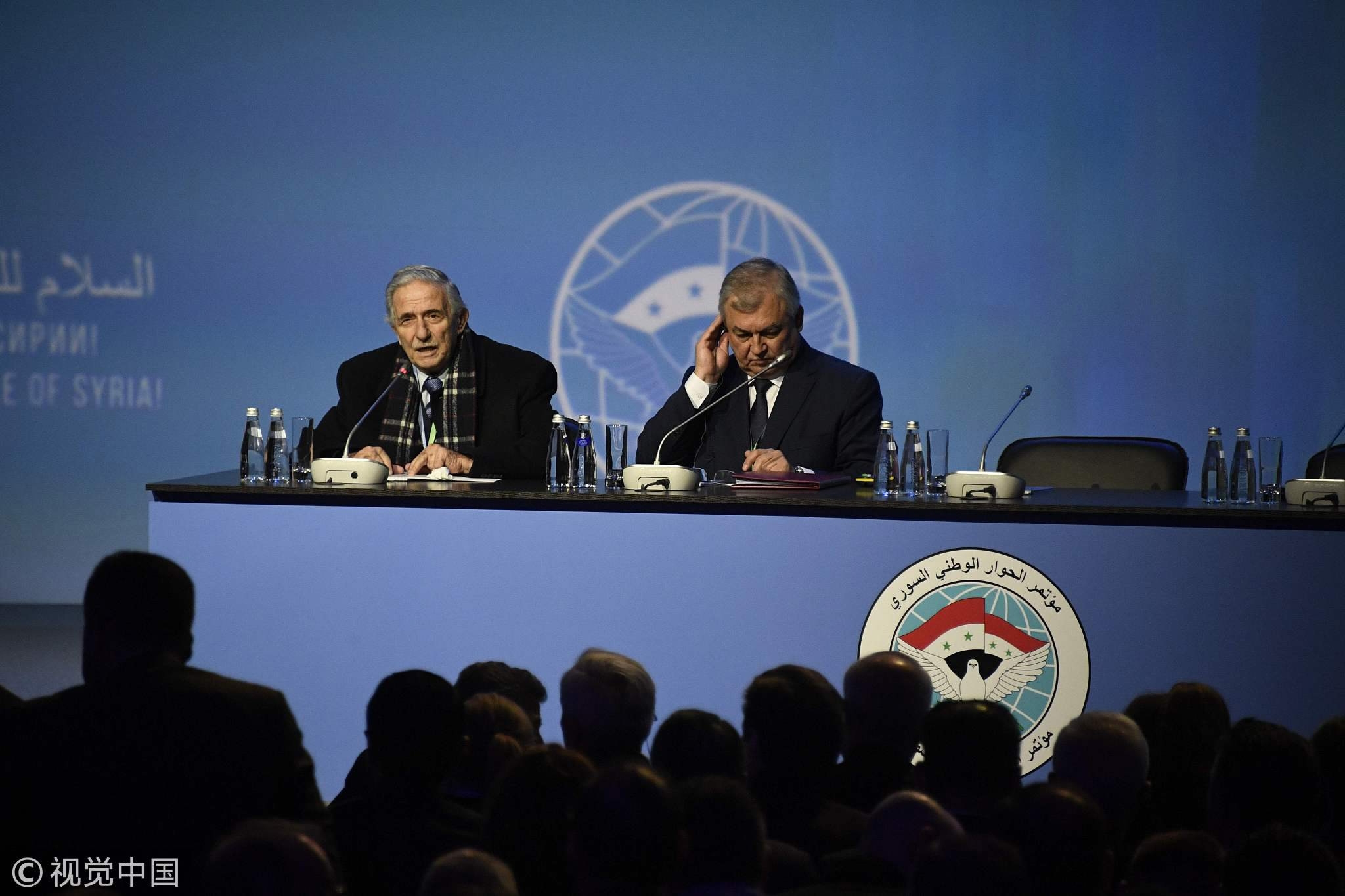 Head of the chamber of commerce in Damascus Mohamad Ghassan Al Qalaa (L) and Kremlin’s special envoy on the Syria peace process Alexander Lavrentyev attend a plenary session at the Congress of Syrian National Dialogue in Sochi, January 30, 2018. /VCG Photo

But participants of the Russian-led Syrian Congress of National Dialogue in January had divided opinions on the meeting: Russia and Turkey were happy with the result, a constitution committee was created and a 12-point statement outlining the Syrians’ view on their country’s future was adopted.

However, Syrian opposition groups boycotted the meeting, saying their role had been marginalized in the agreed constitution proposal.

Read more: Geneva and Astana: How do the Syrian peace talks differ? 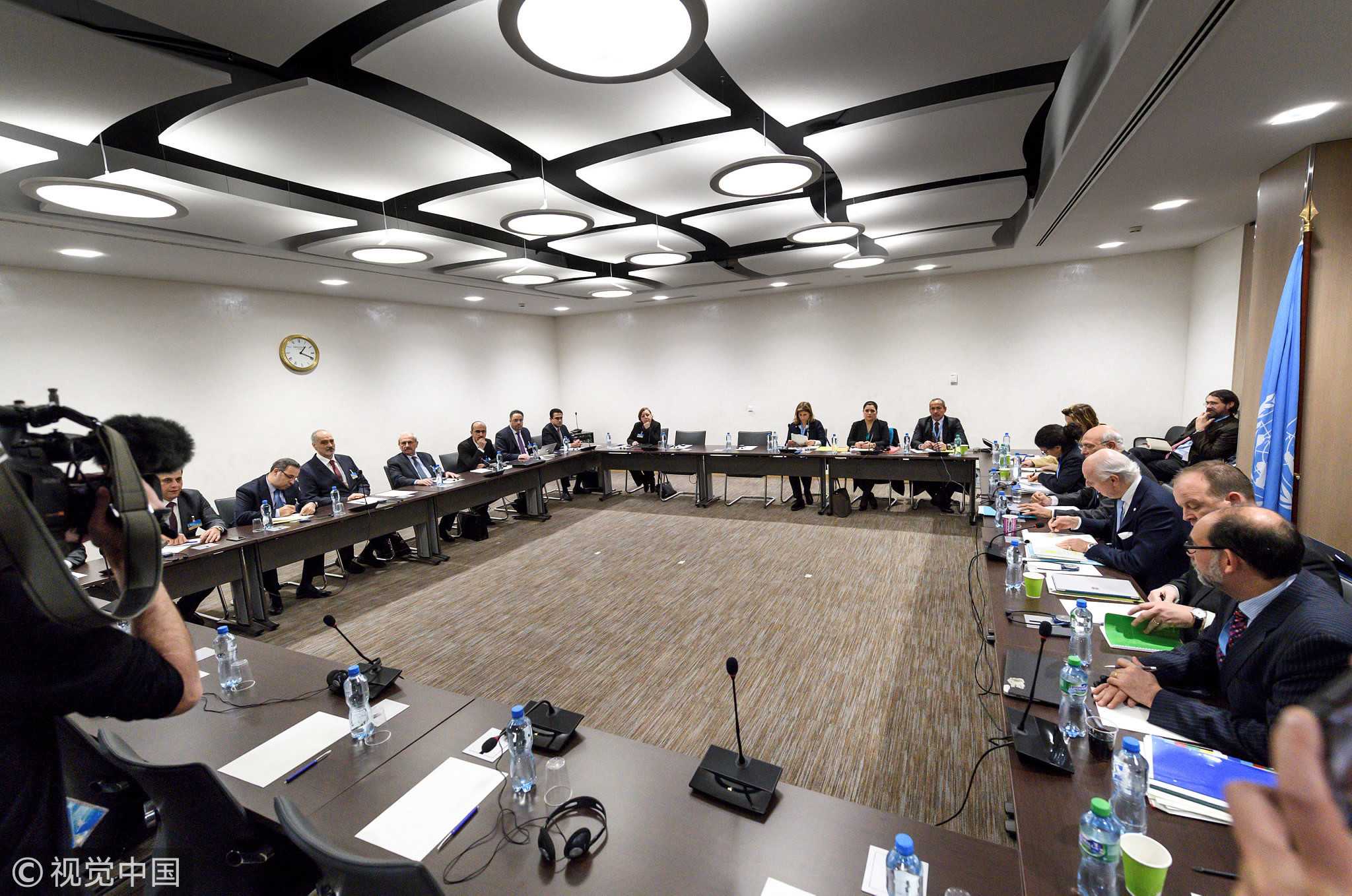 December 14, 2017: The meeting between the Syrian government delegation and the UN Special Envoy for Syria during Intra Syria peace talks at the UN in Geneva. /VCG Photo

The Astana peace talks focused on the primary goal of achieving a ceasefire and latterly on humanitarian issues, with four “de-escalation zones” having been established last May.

The Geneva talks aimed to reach political settlements, drafting a new constitution and holding elections as the basis for a “Syrian-led, Syrian-owned process” to end the conflict. However, Syrian government and opposition have not even negotiated face-to-face in any peace talks.

The international interventions have not brought an end to the war any closer. Since the fighting started seven years ago, more than 400,000 people have died and 5 million Syrian refugees have been displaced.

The situation in the country remains complicated in 2018: the Syria government has regained control of a large part of the opposition-held area of Eastern Ghouta near Damascus after a new agreement reached on the evacuation of the rebels, leaving the Douma district the only area out of the government’s control. 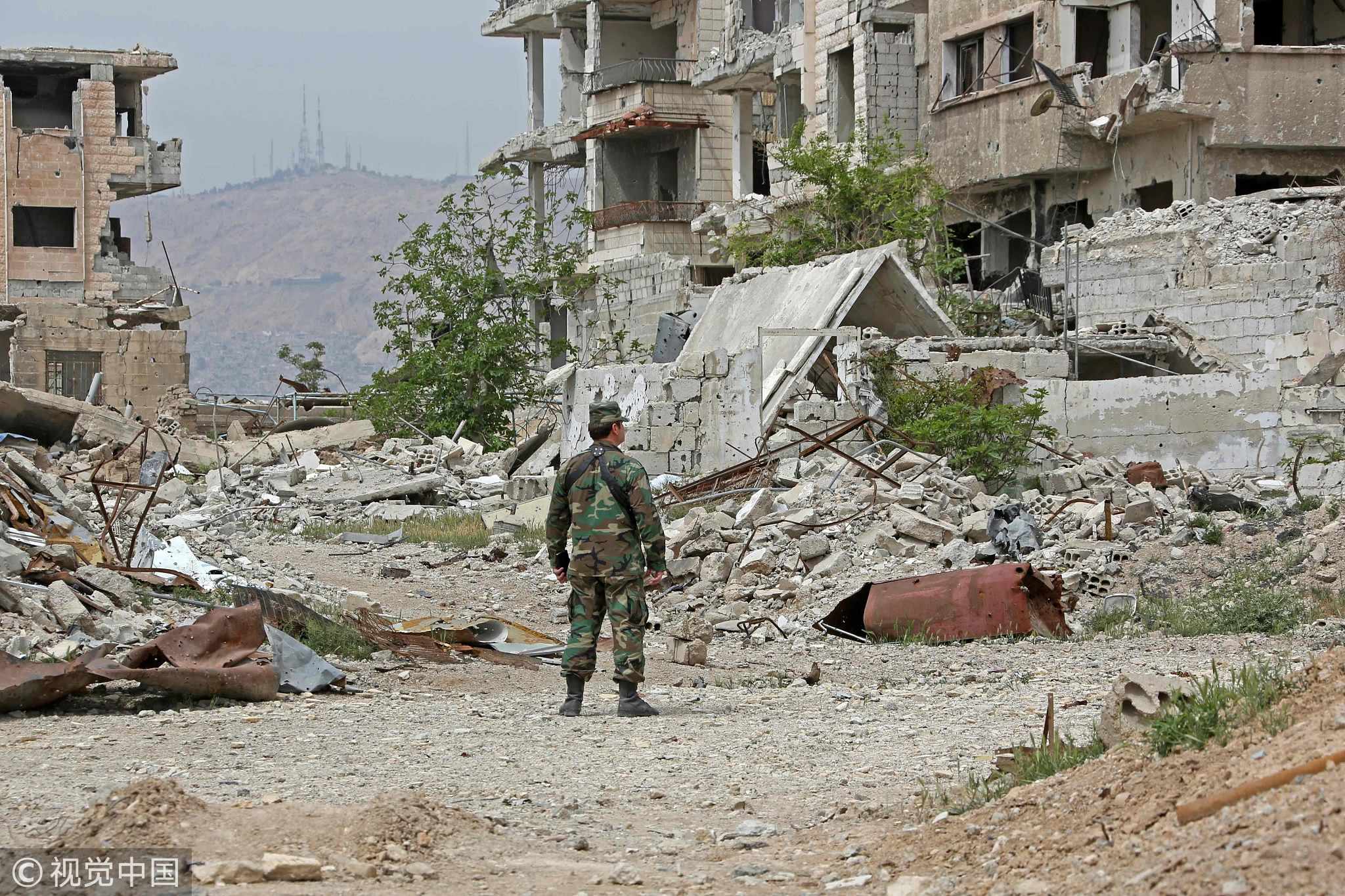 In the northwestern Syrian region of Afrin, Turkey undertook its own military operation, coded “Operation Olive Branch” for two months and claimed in March that it had driven Kurdish YPG fighters out and taken full control of the region. Latest reports suggest that Turkish military might expand their operation to the east of Afrin, risking clashes with the US troops.

In escalation over submarine deal, France recalls envoys from U.S. and...