Asif Saeed Khan Khosa, 64, is the 26th Chief Justice of Pakistan. He was one of the judges who disqualified from politics for life former prime minister Nawaz Sharif over corruption.

Pakistan’s new chief justice was sworn in on Friday, pledging reform of a Supreme Court whose controversial decisions include ousting a prime minister and freeing a Christian accused of blasphemy.

Asif Saeed Khan Khosa, 64, became the 26th Chief Justice of Pakistan after a televised ceremony at President’s House in Islamabad saw the judge take the oath in front a crowd of dignitaries.

“I will do right to all manner of people, according to law, without fear or favour,” said Khosa.

Known as the “poetic justice” for his habit of citing works of literature in his judgements, he is regarded as Pakistan’s top expert in criminal law.

Khosa was a member of the Supreme Court panel that last year overturned the death penalty then freed a Christian woman jailed for blasphemy, sparking days of violent protests by Muslim hardliners.

He was also among the judges who disqualified from politics for life former prime minister Nawaz Sharif after corruption allegations in 2017.

In his judgement, he cited the Balzac epigraph from Mario Puzo’s 1969 novel “The Godfather,” which reads: “Behind every great fortune there is a crime.”

He avoided such references, however, as he pledged judicial reforms at a farewell ceremony for his predecessor, Mian Saqib Nisar. 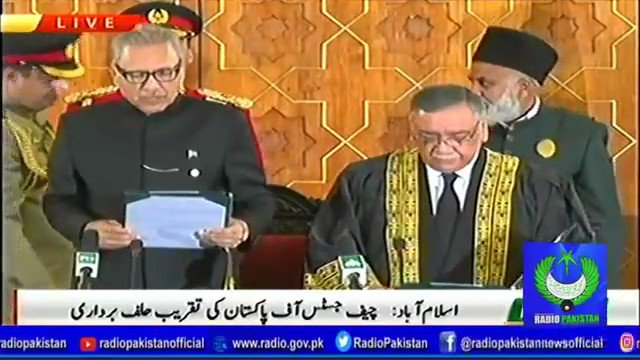 Nisar had been widely criticised by the legal community and politicians for his broad use of his ‘suo moto’ powers – a device in the Pakistani legal system that allows a judge to take notice of any issue of public interest.

Under the cover of such notices, Nisar was known for making surprise inspections and famously launched a massive crowdfunding effort to build dams.

Some critics accused him of blurring the lines between judicial and executive powers.

Khosa on Thursday called for a resolution to such concerns.

“Let us discuss the alleged encroachment of the executive domain by the judiciary … and how best the judiciary can return to its normal but effective adjudicatory role,” he said.

Akram Sheikh, a former president of the Supreme Court Bar, lauded the remarks as a “very welcome gesture.”

The move to “separate the powers of the judiciary and the executive expunged by the new chief justice will ensure dichotomy of power and strengthen democracy,” Sheikh said.

Pakistan’s judiciary currently lacks the capacity to cope with the country’s surging population and an expanding case load, resulting in a mammoth backlog.

Khosa said some 1.9 million cases were pending in the country’s courts, and just 3,000 judges to deal with them.