Pakistan PM Imran Khan says his party and the powerful army are “all on one page” to mend ties with its arch-foe, during a rare ceremony for the first visa-free border crossing for Indian Sikh pilgrims.

Pakistan Prime Minister Imran Khan said on Wednesday his government and the military want to mend ties with arch-foe India, during a ground-breaking ceremony for the first visa-free border crossing for the Sikh pilgrims of India.

“I, the prime minister, my political party, the rest of our political parties, our army, all our institutions are all on one page. We want to move forward,” Khan said in a speech to open a new border crossing with India in Punjab province.

“If India takes one step forward then we will take two steps forward toward friendship,” he said.

Pakistan’s chief of army staff, General Qamar Javed Bajwa, was among the dignitaries at the inauguration ceremony.

The new crossing point, which will officially open next year, is about 120 km north of the Pakistani city of Lahore and will be used by Sikh pilgrims coming from India on a visa-free basis to visit holy sites in Pakistan. 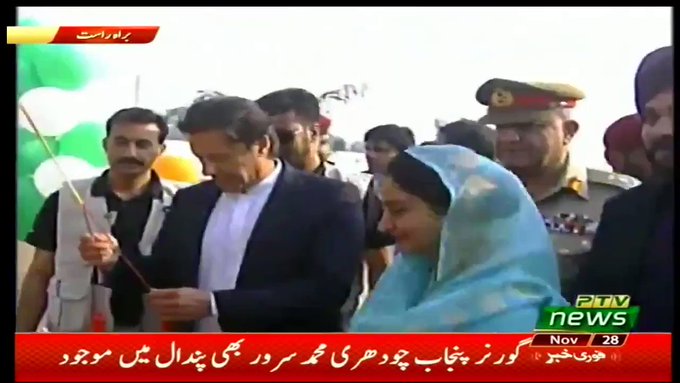 544 people are talking about this

‘We have just one problem, Kashmir’

The agreement is a rare instance of cooperation between the South Asian rivals which have fought three wars since independence from Britain in 1947, two of them on disputed Kashmir.

“The happiness I see in you today, if I were to explain to my Muslim brother and sisters, is that imagine that you are standing 4 km outside Madina and cannot go in, and you are then given the chance to go. That is the happiness I see here,” Pakistani newspaper Dawn quoted Khan as saying.

Khan urged India to resolve the Kashmir dispute, saying “we have just one problem, Kashmir. If man can walk on the moon, what problems are there that we cannot resolve?”

Appealing for a thaw in ties, Khan called for improvements in trade and other cross-border interaction and urged ending poverty through cooperation.

Muslim Pakistan and mostly Hindu India have a range of disputes but their main bone of contention is the Muslim-majority Himalayan region of Kashmir, which they both claim in full but rule in part.

India accuses Pakistan of training and arming rebels battling over 500,000 Indian troops in the India-administered portion of Kashmir.

Pakistan denies that, saying it only offers political, moral and diplomatic support to Kashmiris seeking a merger of the territory with Pakistan or independence.

Violence in Kashmir routinely triggers tension between the two countries.

The crossing – known as Kartarpur corridor – is a rare sign of cooperation between the two arch foes that will allow Sikh pilgrims to easily visit their shrines on each side of the border.

It’s unclear how long the construction will take or when the crossing will actually open.

Instead of visas, the pilgrims will be given special permits to access their shrines – Gurdwara Darbar Sahib in Pakistan’s Punjab province and Dera Baba Nanak in India’s own Punjab province.

#KartarpurCorridor. All measures at goodwill and friendship between India and Pakistan welcome by people of Kashmir.Urge both countries to extend it to the core issue between them and resolve the Kashmir dispute to open floodgates of peace and prosperity for people on all sides!

‘I assure you the problem will be solved’

In September, India called off a meeting between their foreign ministers to protest against the killing of Indian border soldier in Kashmir.

Khan said both countries stood to gain from better ties.

“We need leaders on both sides of the border who resolve to end this problem and I assure you the problem will be solved,” Khan said.

“Can you imagine how much this would benefit both countries?”

The tourism minister of India’s border state of Punjab, Navjot Singh Sidhu, was among officials who crossed the border for Wednesday’s inauguration.

“Both the governments should realise that we have to move forward,” Sidhu, a Sikh, said in a speech before Khan spoke.

Next year is the 550th anniversary of the birth of the founder of Sikhism, Guru Nanak, in a small village near Lahore. 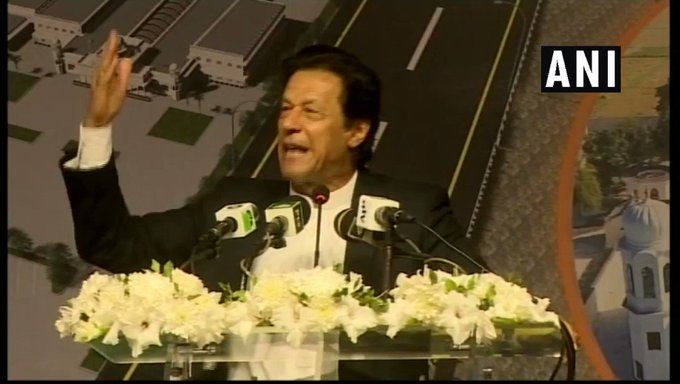 #WATCH Pakistan PM Imran Khan: I don’t know why was Sidhu criticised (in India). He was just talking about peace. He can come and contest election here in Pakistan, he’ll win. I hope we don’t have to wait for Sidhu to become Indian PM for everlasting friendship b/w our nations.

The ceremony came as Indian Foreign Minister Sushma Swaraj announced India will not take part in a summit of South Asian Association for Regional Cooperation (SAARC) leaders set for Islamabad.

Even though Indian lawmakers travelled to Pakistan for the foundation-stone-laying ceremony in Kartarpur, Swaraj said the opening of the corridor did not mean resumption of dialogue.

“Unless and until Pakistan stops terrorist activities in India, there will be no dialogue and we will not participate in SAARC,” Swaraj said.