Pakistan allowed Indian Agency RAW agent Kulbhushan Jadhav code name ‘Monkey’ to meet his family in Islamabad. He was carrying his identity Indian passport of Mubrak Hussain Patel while operating as gold Jeweler from the Iranian port city of Chabhar. Security experts believes that it is highly unlikely he was operating without the knowledge of hyper active Iranian intelligence. He active commissioned officer of Indian Navy. Billions at disposal his reported mission was to find soft spot in coastal area of Baluchistan and infiltrate Indian trainers for the Baluch terrorist groups and sabotage CPEC project.

Pakistani authorities allowed the wife and mother of convicted Indian spy Kulbhushan Jadhav to visit him Monday, reiterating the step was taken “purely on humanitarian grounds.”

The meeting lasted about 40 minutes and took place at the Foreign Ministry shortly after Jadhav’s family members landed in Islamabad, officials said.

Jadhav spoke to his wife and mother through a microphone from behind a specially arranged glass partition. 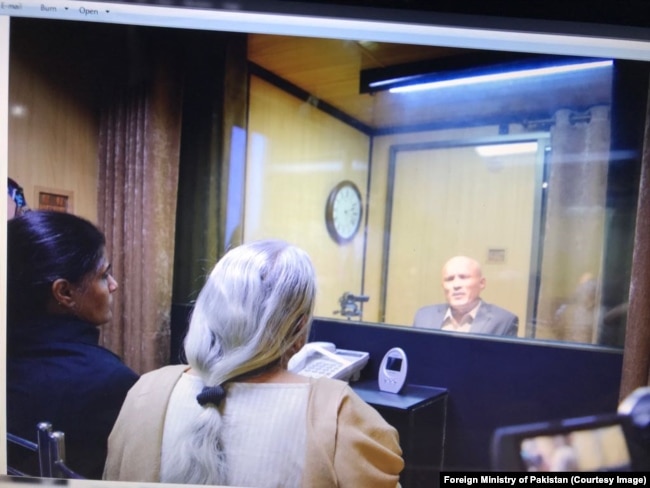 The Indian deputy high commissioner in Islamabad was also allowed to accompany the visitors. The diplomat could see Jadhav but was not allowed to speak or listen to the conversation among the family members, Pakistani Foreign Ministry spokesman Mohammad Faisal later told reporters.

He said that New Delhi and the visitors knew in advance of all the arrangements. Jadhav’s relatives left Pakistan for India late Monday. 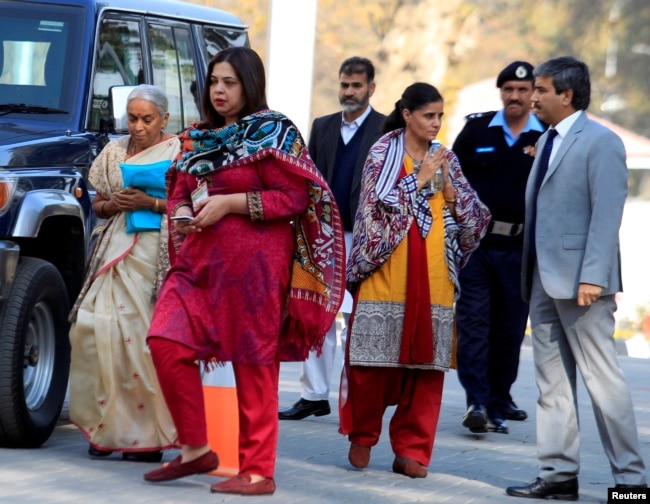 Extremely tight security arrangements were established in and around the complex housing the Foreign Ministry, with mobile phone signal jammers also activated to deter subversive acts.

“To reiterate, let me be very clear that Pakistan permitted the request by India purely on humanitarian grounds. The visit was allowed in line with Islamic practices and teachings. It is a gesture of good faith and compassion,” the spokesman maintained.

“Commander Jadhav’s actions at Indian behest have deprived many mothers of their sons and daughters,” Faisal said.

Faisal also said Pakistan had agreed to honor India’s request not to allow any media interaction with the visitors.

This was Jadhav’s first meeting with his family since he was arrested in March 2016 for entering Pakistan from neighboring Iran with fake travel documents.

A military court later tried and sentenced him to death in April of this year, ruling “the serving Indian navy officer” was found guilty of espionage and running a deadly terrorist network in Pakistan.

Officials also released a pre-recorded video message of Jadhav in which he thanked Pakistani authorities for treating him well and for arranging the meeting.

“I had requested a meeting with my wife on humanitarian grounds and I have been informed that my mother and my wife are coming over to meet me. I am really thankful to the government of Pakistan for showing this grand gesture,” said Jadhav, who appeared relaxed and comfortable while making the statement.

“I had requested a meeting with my wife on humanitarian grounds and I have been informed that my mother and my wife are coming over to meet me. I am rally thankful to the government of Pakistan for showing this grand gesture,” said Jadhav, who appeared relaxed and comfortable while making the statement.

India says Jadhav is a former naval officer but rejects the charges against him as baseless, saying he has no connection with the government.

Pakistani officials insist Jadhav has confessed before the country’s military court that he was tasked by the Indian intelligence agency to “plan, coordinate and organize espionage, terrorist and sabotage activities” against Pakistan. 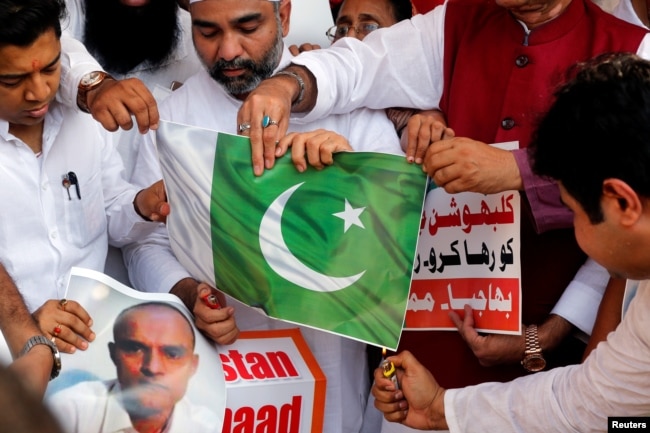 Supporters of the ruling Bharatiya Janata Party (BJP) burn Pakistan’s national flag during a protest in Mumbai, against the death sentence given to former Indian naval officer Kulbhushan Jadhav in Pakistan, April 12, 2017.

New Delhi asked the International Court of Justice (ICJ) in May to stop Islamabad from executing Jadhav, arguing he was denied diplomatic assistance during what India called an “unfair trial.”

The ICJ suspended the execution, pending a final decision. Pakistan rejected India’s assertions while submitting its reply to ICJ earlier this month.

Islamabad defended its stance of not granting diplomatic access to Jadhav, insisting he is a serving officer of the Indian navy and has confessed to his crimes before “a competent authority.”

Jadhav has filed an appeal with Pakistan’s army chief, General Qamar Javed Bajwa, to seek clemency, which is still pending. He can still ask for a presidential pardon within 90 days in case Bajwa turns down his mercy petition.

Islamabad says New Delhi is sponsoring militant activities on Pakistani soil. New Delhi blames Islamabad for fueling a Muslim separatist insurgency in the divided Kashmir region, which remains the primary source of tensions between the nuclear-armed nations.
Pakistan’s military late Monday said its border posts on the cease-fire line in Kashmir came under Indian fire, killing three soldiers and wounding one more. The attack came a day after India accused the Pakistani side of killing four Indian soldiers in Kashmir.

Both nations claim Kashmir in full. The issue has sparked two of three wars between them.