Britain’s Northern Ireland minister called an early election on Monday for March 2 following the collapse of the region’s power-sharing government that risks a lengthy period of political paralysis just as Britain prepares for talks to leave the EU.

Northern Ireland is widely seen as the part of the UK most exposed to Brexit as it could upend trade and the free movement of people across its land border with the Irish Republic. Efforts to form a new devolved government will likely begin just before Britain starts the talks on exiting the European Union.

“No one should underestimate the challenge faced to the political institutions here in Northern Ireland and what is at stake,” Britain’s Northern Ireland minister James Brokenshire told a news conference.

“I would strongly encourage the political parties to conduct this election with a view to the future of Northern Ireland and re-establishing a partnership government at the earliest opportunity after that poll. All must remain open to dialogue.”

British Prime Minister Theresa May made a last-ditch attempt to persuade McGuinness’ Irish nationalist Sinn Fein and Foster’s pro-British Democratic Unionist Party (DUP) to overcome the impasse. May stressed that political stability would give the province a stronger voice in the Brexit preparations, the prime minister’s spokeswoman said.

However, Sinn Fein, which had already begun picking election candidates in advance of Monday’s deadline to avoid snap elections, refused to name a replacement for McGuinness.

Sinn Fein, once the political arm of the Irish Republican Army (IRA), has governed with the rival DUP for 10 years under power-sharing arrangements that put an end to three decades of sectarian violence in the province. They were voted back into power as the two largest parties only last May.

McGuinness, who is to announce shortly whether he will lead Sinn Fein into the election after a break from some duties due to illness, has suggested the vote will be followed by lengthy renegotiations on the terms of the power-sharing government.

Sinn Fein’s demands are likely to include funding additional rights for Irish language speakers and the lesbian and gay community, which the DUP has blocked, and also inquiries into deaths in the “Troubles”.

“I would like to think that they will be sorted out because Arlene Foster, if they are not sorted out, will never be the first minister again,” Sinn Fein President Gerry Adams told Irish national broadcaster RTE.

Power-sharing formed a key part of the 1998 Good Friday peace agreement, which ended the conflict between mainly Catholic Irish nationalists seeking a united Ireland and Protestant pro-British unionists wanting to remain part of the United Kingdom. Some 3,600 people were killed in those years 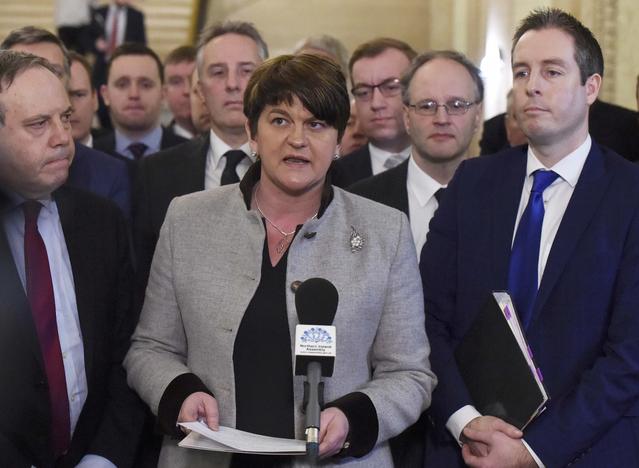 Ireland’s Foreign Affairs Minister Charlie Flanagan, whose government is a co-guarantor of the 1998 agreement, said the devolved institutions were “indispensable” for both peace in Northern Ireland and the big challenges it faces from Brexit.

A failure to form a new executive would risk the first suspension of the province’s political institutions in 15 years and the return of its 1.8 million people to direct rule from London.

Brokenshire said he was not contemplating such a move and refused to speculate over how long post-election talks may last but a senior DUP member warned direct rule may be necessary.

“After an election, I think we’re in for a prolonged period of direct rule from Westminster whilst negotiations take place between the political parties,” Jeffrey Donaldson told Northern Ireland’s Newsletter newspaper.

(Writing by Padraic Halpin in Dublin, additional reporting by Will James in London; Editing by Gareth Jones)

Greece Loan Plan: EU Told Take It Or Leave It