The Turkish Republic of Northern Cyprus (TRNC) on Thursday publicly unveiled prototypes for two domestically produced auto models after years of work by the Near East University (YDÜ) and its research and development (R&D) teams.

The project to develop the Günsel was first launched in 2016 and only now has resulted in the unveiling of the B9 and the SUV-type J9.

Speaking at the unveiling ceremony held in Girne (otherwise known as Kyrenia), Turkish Cypriot Prime Minister Ersin Tatar noted that the achievement marked a satisfying moment in the TRNC’s history and congratulated everyone involved in the development of the country’s first homegrown automobile project.

Tatar said that although the TRNC was often referred to negatively in the region, this development was something that could only put the country in a good light,

“We are the descendants of a successful nation that embraces and glorifies our state,” he noted.

Also speaking at the ceremony, Turkey’s ambassador to Lefkoşa (or Nicosia) Ali Murat Başçeri congratulated everyone who had put great effort into the project.

Noting that the automotive industry was on the cusp of a new era, evolving to incorporate electric power and network technologies, Başçeri said that he was happy to see the Günsel project’s readiness to embrace the new.

Başçeri pointed out that the company would provide a chance to improve the quality of the R&D ecosystem of the TRNC hoping to inspire the emergence of further companies.

Başçeri stressed that the R&D and innovation works set to be carried out in technoparks would forge the future of the TRNC, despite the political obstacles and restrictions faced by the country.

The island of Cyprus has been divided since 1974 when a Greek Cypriot coup took place after decades of violence against the island’s Turkish community and Ankara’s intervention as a guarantor power. The TRNC was established in 1983 on the northern one-third of the island, is only recognized by Turkey and faces a longstanding embargo on commerce, transportation and culture.

The decades since have seen several attempts to resolve the Cyprus dispute, all failing. The latest one, held with the participation of the guarantor countries – Turkey, Greece, and the U.K. – came to an end without any progress in 2017 in Switzerland. 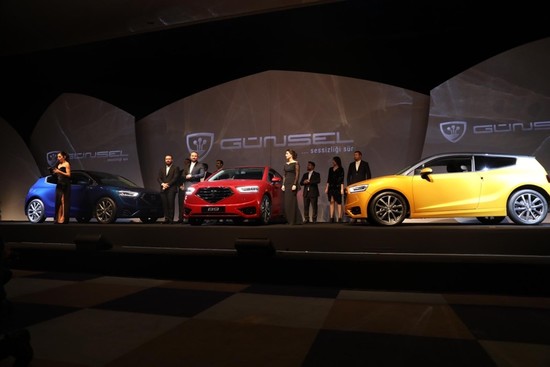 Professor Irfan Günsel, chairman of the board of trustees at the Near East University, stated that the domestically produced vehicles would be a great turning point for the country, adding they were happy to be working on the project together.

The ceremony was also attended by Deputy Prime Minister and Foreign Minister Kudret Özersay, several other ministers, parliamentarians, the TRNC’s third president, Derviş Eroğlu, as well as an assortment of business people, both foreign and local.

The car will incorporate the latest electrical technology and aims to go from zero to 100 kilometers in eight seconds, with a 120 kilowatt (kW) electric engine equivalent to 160 horsepower.

The development process of the automobile is said to have involved a combination of 10,000 very safe, advanced and efficient parts.

A cooperation protocol has been signed with 800 companies from 28 countries for the parts to be used in the production process of the TRNC’s first domestically produced automobile and mass production set to begin in 2021.

The City of London: Chinese investment “a great opportunity”