HomeAll ArticlesKalabagh Dam to be constructed Soon, project was conceived by British before...
All ArticlesBusinessDiplomats CornerFeaturedNewssider 1Uncategorised

Kalabagh Dam to be constructed Soon, project was conceived by British before 1947

The announcement of construction of ‘Kalabagh Dam’ by Faisal Vawda, PTI’s minister of Water seems to be the continuation and re-birth of British Government’s project prepared by engineers before 1947, as it was the best location for the dam (technically viable).

India ‘water bombed’ Pakistan via politicians and tools in the establishment for years by bribing in billions. The whole teams of Bhuttos, ANP, MQM and Sharifs were playing for the Indians. So much so the Indus water commissioner a dual Canadian national ran off from Pakistan as it was him who allowed Indians complete dams and illegal projects in disputed Indian occupied Kashmir. Construction of Kalabagh Dam will be one of the biggest water reservoirs in Pakistan.

The Pakistan Tehreek-e-Insaf (PTI) government has announced the construction of Kalabagh Dam. According to a reply submitted by Federal Minister for Water Resources Faisal Vawda to the parliament, the biggest water reservoir Kalabagh Dam will be constructed to deal with the increasing crisis of water in the country.

He told the parliament that new water reservoirs will be constructed to remove the water scarcity in the country.

Under the WAPDA plan, Chiniot Dam, Karam Tangi Dam, Shevak Dam and Skardu Dam would be constructed. The Sindh areas, under the plan, will be irrigated by increasing water supply and recharging the underground water from the Sindh Barrage.

After the construction of new dams, the total capability to store the water reservoir will reach 25.05 million-acre feet, which will be double as compared to current capacity.

When all the engineers and scientists are saying that Kalabagh Dam, which was originally planned by the British before 1947 is the most viable and appropriate to serves the needs of Pakistan but politicians are against the dam. Why? That is a matter of national interest. 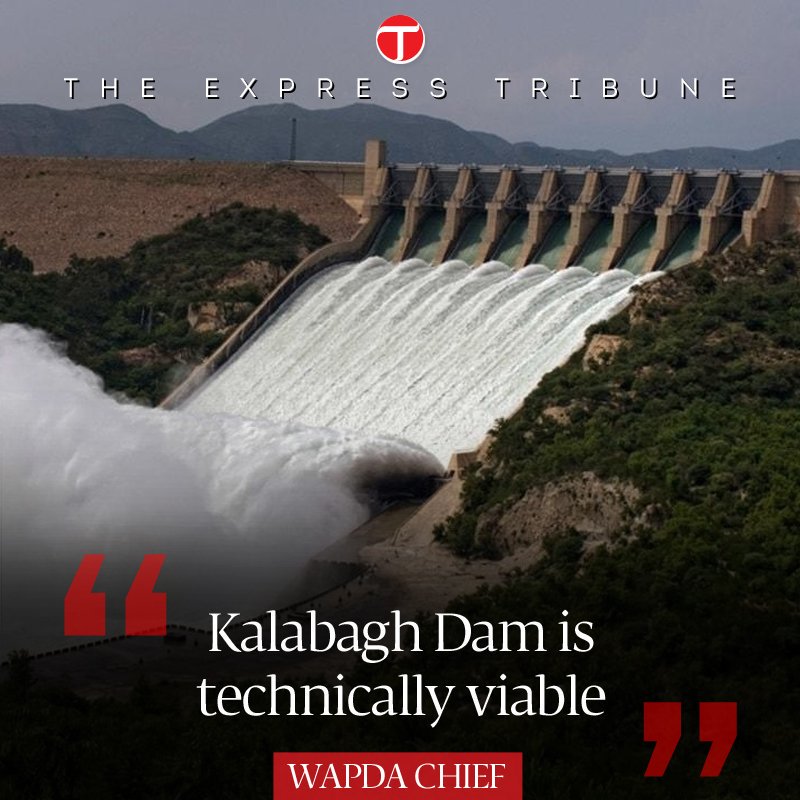 The London Post published on 1st April 2014, “Pakistan, Bangladesh and Nepal face difficulties in the agricultural sector because of a water grabber country in their neighborhood. India is using water as an instrument of war, converting land of neighboring countries into deserts through inundation and trickling of water planning barrages and dams while violating international water pacts. Future wars in South Asia would be due to water scarcity and food insecurity.

India is following a two-pronged strategy, firstly it is accumulating water by building dams on the rivers that flow into Pakistan. Pakistan has an agriculture-based economy reliant on the Indus and its tributaries, upstream dams allow India to manipulate the flows of water as it sees fit.

Secondly, it diverts river-courses during monsoons to release too much water towards Pakistan causing floods and destruction. A 2011, U.S. Senate Foreign Relations Committee report concluded that the cumulative effect of multiple hydroelectric projects could give India the ability to store enough water to limit Pakistan’s supply at crucial moments in the growing season.

India has constructed 4 large and 16 small dams on River Jhelum, a total of 62 dams are to be built on the rivers Chenab and Jhelum. India is also constructing a large dam in Kargil on River Indus which will block 45 % flow of water to Pakistan, it is said to be the world’s 3rd largest dam. India has finalized plans to build a dam on River Kabul and set up Kama Hydroelectric Project using 0.5 MAF of Pakistan water with the approval of Karzai.

India’s water storage capacity is 287 MAF (million acre feet) whereas Pakistan’s stands below 12.6 MAF. 10 to 20% of agriculture in India/Pakistan is under threat due to falling groundwater levels. Pakistan is on the brink of water scarcity Agriculture provides employment to half of all Pakistanis and accounts for a quarter of the GDP. In this situation Pakistan should have been building smaller dams instead of the proposed Kalabagh Dam which has simply proved to be an insurmountable hurdle. If dams are not built now Pakistan will lose 30% of its water. It would have been immensely practical to have more dams to store water, in turn this would have helped in hydro-power easing the power crisis and decreasing load-shedding. Electricity is needed to operate tube wells that help to decrease the shortfall of water.

It is a vicious cycle, Less water, less electricity and more load-shedding with a weaker economy. The load shedding in itself takes a toll on our industries. Construction of the Bhasha /Daimler dam should have been expedited at the very least, but the government is inordinately hesitant to take any concrete steps and putting Pakistan’s water supply under unnecessary threat.

Pakistan suffered a lot due to the ‘one-sided’ Indus Waters Basin Treaty. The Indus river system has three western rivers Indus, Chenab, Jhelum and three eastern rivers Beas, Ravi, Sutlej. The eastern rivers to be for exclusive use by India before they enter Pakistan. The geography is such that the source rivers of the Indus basin are in India. Pakistan has exclusive use of the western rivers Jhelum, Chenab and Indus but for the development of projects on these rivers by India. “Giving away three eastern rivers to India has been a catastrophe for Pakistan because India never shared water shortages “, says former irrigation minister ANG Abbasi.

There is need for the World Bank to revisit the treaty it had brokered and estimate the damages Pakistan had to suffer because of it. The World Bank allocated the eastern rivers to India and the western rivers to Pakistan despite the fact that Pakistani Punjab’s Eastern districts could turn into desert. Pakistan felt that its share of waters should be based on pre-partition distribution. The World Bank proposal was more in line with the Indian plan. The provisions on how the waters were to be shared were rather controversial.

Since Pakistan’s rivers flow through India first, the treaty allowed India to use them for irrigation, transport and power generation, while laying down rules for Indian building projects along the way. Both countries exchange data and there is the Indus Commission to deal with matters related to the treaty. According to the Indus Waters Basin Treaty each country must notify the other of plans to construct any engineering works which would affect the other and provide data about such works.

India refuses to resolve these matters at the SAARC, saying that water clashes with Bangladesh and Nepal will be solved through tripartite dialogues. Indus Waters Basin Treaty India /Pakistan 1960, Indo-Bangladesh water dispute over the Farakka Barrage /The Ganges Water Treaty and India/Nepal dispute over the Mahakali River are all examples of India’s water terrorism in contravention of international agreements.

Some say the 3rd World War would be over control of water sources. In a 2012 study Resources Futures, British think tank Chatham House expressed concern about possible resource wars over water, “especially in areas where several groups or countries must share the same river for the majority of their water supplies and few possess the wherewithal to develop alternatives.” Water Wars are speculated about over contested river systems ensuing global food riots sparked by soaring prices for life’s basics and mass migrations of ‘climate refugees’. By 2025 about 2 billion would live in water -deficient countries. Over population and excess urbanization has increased the water demand and it is a load on the eco-system.

Climate change is slowly progressing. A Dutch study found that by 2050, shrinking glaciers are predicted to reduce the flows of the Indus by 8%. Pakistan should realize the gravity of the situation and start storing water before it is too late.”

Please tell people that ‘dams don’t use water they just store it’.

(Dr Shahid Qureshi is senior analyst with BBC and chief editor of The London Post. He writes on security, terrorism and foreign policy. He also appears as analyst on Al-Jazeera, Press TV, MBC, Kazak TV (Kazakhstan), LBC Radio London. He was also international election observer for Kazakhstan 2015, 2016, and 2019, Azerbaijan 2019 and Pakistan 2002. He has written a famous book “War on Terror and Siege of Pakistan” published in 2009. He is PhD in ‘Political Psychology’ also studied Law at a British University. He wrote his MA Thesis in Government College Lahore on ‘Political Thought of Khomeini’ and visited Tehran University. He speaks at Cambridge University and a visiting Professor at Hebe University in China)