A clause in the UAE-Bahrain accords with Israel leaves ‘door wide open’ to Jewish prayer at holy site, analysts say.

A statement embedded in the United Arab Emirates (UAE) and Bahrain normalisation agreements with Israel, brokered by the United States, may lead to the division of the Al-Aqsa compound because it violates the status quo, analysts say.

According to a report by NGO Terrestrial Jerusalem (TJ), the statements mark a “radical change in the status quo” and have “far-reaching and potentially explosive ramifications”.

Under the status quo affirmed in 1967, only Muslims can pray within al-Haram al-Sharif, also known as the Al-Aqsa Mosque compound, which consists of 14 hectares (35 acres).

Non-Muslims can visit but cannot pray at the site. Israeli Prime Minister Benjamin Netanyahu affirmed this status quo in a formal declaration in 2015.

However, a clause included in the recent accords between Israel and Gulf Arab states indicates this may no longer be the case.

According to the joint statement between the US, Israel, and the UAE released on August 13 by US President Donald Trump: “As set forth in the Vision of Peace, all Muslims who come in peace may visit and pray at the Al-Aqsa Mosque and Jerusalem’s other holy sites should remain open for peaceful worshippers of all faiths.”

But Israel defines Al-Aqsa as the structure of the one mosque, as does the statement, the TJ report clarified.

“According to Israel [and apparently to the United States], anything on the Mount that is not the structure of the mosque is defined as ‘one of Jerusalem’s other holy sites’ and open to prayer by all – including Jews,” the report said.

“This choice of terminology is neither random nor a misstep, and cannot [be] seen as anything but an intentional albeit surreptitious attempt to leave the door wide open to Jewish prayer on the Temple Mount, thereby radically changing the status quo.”

The same statement was repeated in the accord with Bahrain, announced on Friday.

Joint Statement of the United States, the Kingdom of Bahrain, and the State of Israel pic.twitter.com/xMquRkGtpM

Khaled Zabarqa, a Palestinian lawyer specialising in Al-Aqsa and Jerusalem affairs, told Al Jazeera the statement “very clearly says the mosque is not under Muslim sovereignty”.

“When the UAE accepted such a clause, it agrees and gives a green light for Israeli sovereignty over Al-Aqsa Mosque,” Zabarqa said.

“It’s a clear and massive violation for the international and legal status quo of Al-Aqsa Mosque [conceived] after the occupation of Jerusalem in 1967, which says everything inside the walls is under Jordanian custody.”

‘This is not innocent’

Palestinians have long been concerned over possible attempts to partition the holy mosque, as was the case with Hebron’s Ibrahimi Mosque.

Over the years, there has been a growing Temple Movement, mostly led by “the extreme nationalistic religious Jewish right” that seeks to change the status quo, the report by TJ said.

Some call for Jewish prayer on the holy compound, while others aim to build the Third Temple over the ruins of the Dome of the Rock, which according to messianic belief would usher the coming of the messiah.

The Israeli NGO Ir Amim has published numerous reports over the years warning of this once-fringe group, which today is part of the political and religious mainstream and benefits from close ties with Israeli authorities.

These activists believe allowing Jewish prayer at the compound and dividing the holy site between Muslims and Jews would be a step towards asserting sovereignty, and eventually attaining their ultimate goal of building the temple.

In recent years, an increasing number of Jewish visitors have been attempting to pray at the site in violation of the status quo.

Daniel Seidemann, an Israeli attorney specialising in the geopolitics of Jerusalem, told Al Jazeera he is “deeply concerned about what is happening”.

“What we’re witnessing in Jerusalem is the ascendency of the religious factions that weaponise religion. We’re on a trajectory that will lead us to a conflagration.

“We know these clauses are worked out together, every single word in a joint team of US and Israel. The transition from the term Haram al-Sharif to the term Al-Aqsa Mosque is not an accident,” Seidemann said.

A more blatant statement was included in Trump’s “deal of the century” plan for the Middle East, unveiled in late January alongside Netanyahu at the White House.

Jared Kushner, Trump’s son-in-law and senior adviser, has been the main point person on the proposal, and Ron Dermer, Israel’s ambassador to the US, has been linked to the wording of the deal.

The clause was met with controversy, prompting US Ambassador to Israel David Friedman to walk it back at a press briefing on January 28. “There’s nothing in the plan that would impose any alteration of the status quo that’s not subject to agreement of all parties,” he said.

A senior US official – familiar with both the parties and the issues – told Al Jazeera he had “no doubts that the language in the Israel-UAE statement was written with malice of forethought by the Israeli side, without a clear understanding from the Emirates, and with the complicity of a clueless American team”.

“The rapid walk-back by Friedman of what was in the Trump plan attests to this: Dermer likely inserted it, Kushner didn’t have a clue,” the official said, speaking on condition of anonymity.

“The fact that it was Friedman who walked it back, rather than the White House, also means the Trump plan language is still official and determining if push comes to shove… Even if the Kushner-Friedman dolts understand the ramifications, it is clear they don’t care.”

Eddie Vasquez, senior adviser and spokesperson at the US Department of State, in an email to Al Jazeera referred to a fact sheet published after the “deal of the century” was released, which said the status quo will be preserved.

“All Muslims are welcome to peacefully visit Al-Aqsa Mosque,” one of the points said. But there was no clarification as to why the term Al-Aqsa Mosque was used instead of Haram al-Sharif in the accords with the UAE and Bahrain.

The normalisation agreements come as Israeli authorities recently installed loudspeakers on the eastern and western side of the Al-Aqsa compound last week, without the permission of the Waqf.

The holy compound is administered by the Islamic Waqf, seated in Jordan. According to the status quo, Israel is only responsible for security outside of the gates. 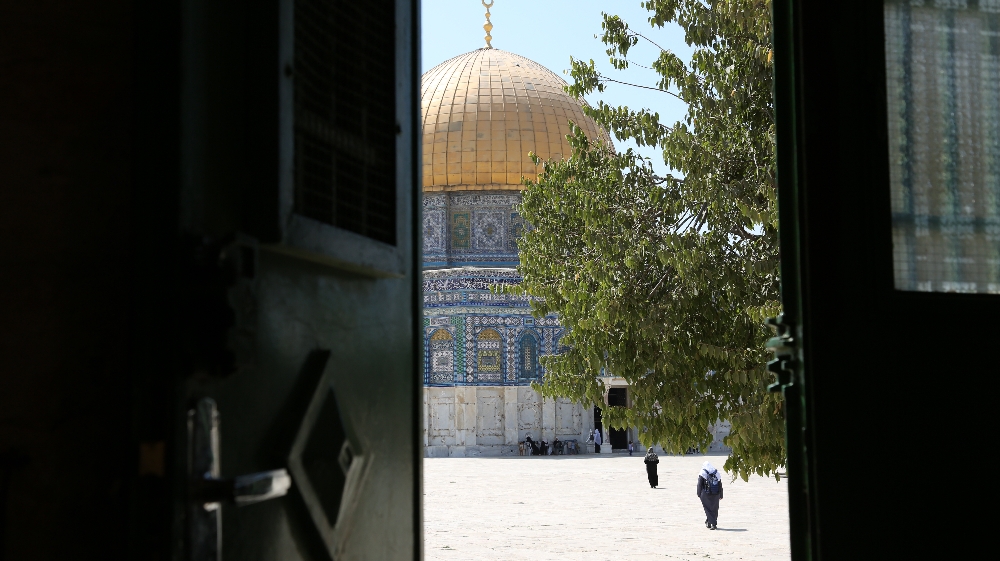 A clause embedded in the normalisation agreements marks a ‘radical change in the status quo’ at the holy Al-Aqsa compound in occupied East Jerusalem, observers say [File: Mersiha Gadzo/Al Jazeera]

“We consider this action an attempt to impose control over the Al-Aqsa Mosque and to undermine the Waqf’s role in the mosque,” Kiswani said.

Zabarqa said Jordan, as the custodian of the site, has “no power to deal with the occupation [authorities]”.

“I believe Jordan needs to make a change and make new allies such as with Turkey. It has to use the financial and diplomatic relations with Israel as a card to put pressure, but it seems it’s weak enough to stand beside the Americans,” Zabarqa said.

TJ noted in its report that there was no mention in the accord of the Waqf and its autonomous role.

“The Muslim claims to Haram al-Sharif/Al-Aqsa are being transformed from one of proprietorship to that of ‘welcome guest’ with the right to visit and pray at Al-Aqsa,” it said.

Zabarqa said the clause is “groundbreaking for the Israeli-American narrative” and believes “the UAE accepted to be the spearhead of it”.

Zabarqa noted in 2014 that the UAE was involved in the transfer of more than 30 buildings to illegal Israeli settlers in Silwan in occupied East Jerusalem.

“This shows us the clear role the Emirates play in changing the status quo term to another one that recognises Israel sovereignty over Al-Aqsa,” Zabarqa said.

Seidemann said when the Emiratis and Bahrainis take part in the ceremony on Tuesday hosted by Trump at the White House to sign a “historic declaration of peace” with Israel, they should demand clarification to be assured the status quo is intact.

“All you would need is for Kushner and Netanyahu to say: ‘I continue to believe what I said in 2015.’ They’ve been asked to do that for the last two weeks, they haven’t done that. This is not innocent,” Seidemann said.

“This is a landmine the Trump administration and Netanyahu are leaving for the next administration, the next Israeli government. They’re tinkering with Haram al-Sharif/Al-Aqsa/Temple Mount. It will light a fuse,” Seidemann said.

“The fuse may be a long fuse, but it will blow up and it’s not too late to prevent it from blowing up.”

With reporting by Dareen Jubeh in occupied East Jerusalem