Kate Middleton, Duchess of Cambridge accompanied Prince William to Normandy on Friday to join in commemorations for the 70th anniversary of the D-Day, Normandy Landings.

The inclusion of the future king and queen, meant there were three generations of the royals who took part in events, perhaps the strongest royal prescence in years. While Kate’s undertaken duties on royal tours and even at the Diamonds Jubilee, it was the first time she has taken part in events on the world stage.

18 heads of state were in Normandy to mark the 70th anniversary of the Allied invasion including President Putin, President Obama and Chancellor Merkel of Germany. Kate and William, despite their popularity, didn’t join the Queen and Prince Charles for the official service at the Bayeux cemetery.

They instead concentrated on the British effort, meeting troops in Arromanches. And it appears that the Duchess was a hit with the veterans. 88 year-old Arthur Jones told The Mirror: “She is very sweet and very lovely. I lost my wife 10 years ago, and I’m on my own now, so I don’t get many opportunities for kisses any more.

“I always thought Kate looked beautiful, but she has a very down to earth personality – it was like she was one of us.” 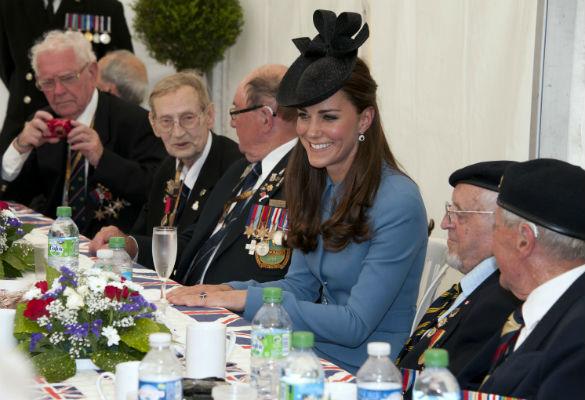 Kate held her own amongst the veterans (SplashNews)

Another veteran, Grenadier Guard Eric Presland, 94, said it was a “fantastic” experience to meet the Duchess.

“I asked Kate how was the little ‘un and she said if he were there, he would be making short work of the plate of cakes,” he said.

“She said he was into everything, and really starting to walk,2 he said. “Just before D Day I met Princess Elizabeth, as was, at Brighton when she came to inspect us. Now I get to meet another princess – fantastic.”

Looks like Kate passed with flying colours. The inclusion of the Cambridge’s could be a signal that the couple will be taking on more public duties as a couple. With the Queen now 88, and the Duke of Edingburgh approaching his 92nd birthday, there will be a noticable winding down of their duties.

It was claimed before the tour to Australia and New Zealand that as the mother of an heir, Prince George, the Queen was keen for Kate to take on a more regal image.

President Ghani ‘must go’ to reach peace deal with Taliban in...

What will Israel do next in Gaza? – Noam Chomsky