Businesses had better move fast to prepare for Brexit in under two years and should not count on long transition periods to cushion the impact of Britain leaving the European Union, the EU’s chief negotiator said on Wednesday.

Many businesses, notably in London’s financial services sector, which is dominant in Europe, or among manufacturers wary of new tariff barriers are considering relocating parts of their operations from Britain. But few have made firm decisions until they see what kind of new trading relationship can be agreed.

Defending his planned phasing of negotiations to start next month — under which talks on trade will not start until other issues are settled — Brexit negotiator Michel Barnier told the European Parliament he wanted to build trust to forge a deal that suits both sides and warned that no deal was a bad option.

Responding to questions from lawmakers, he also stressed the tight timetable for offering legal clarity to firms and people before a two-year negotiating window closes in March 2019 and Britain is out of the EU, deal or no deal. Even with agreement, he warned, they should not rely on gentle transition periods.

“Possibly we will work on transition periods after Brexit, after Britain leaves, periods of phasing out and of phasing in toward the future relationship,” Barnier said. 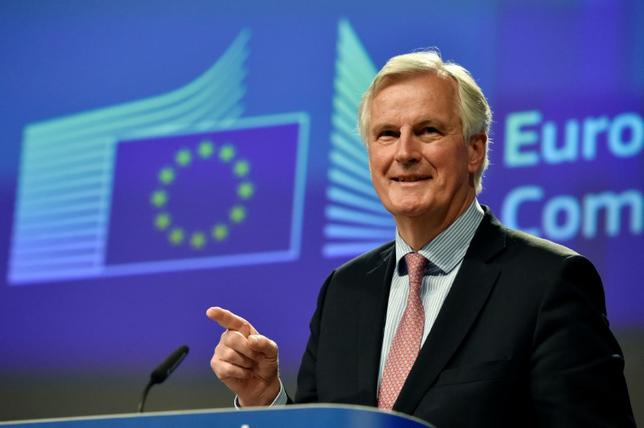 “But the real transition period is now, before withdrawal,” he said. “I recommend that particularly all economic actors make good use of this period so that withdrawal, on the day it happens, probably in March 2019, is as orderly as possible.”

Barnier confirmed he expects to start talks after the British election on June 8. He said Prime Minister Theresa May’s move to call a vote she is expected to win handsomely offered the prospect of a stable government that could help negotiations.

He rejected criticism in Britain of his refusal to launch negotiations on a future EU-UK free trade pact before the Union sees “significant progress” on a divorce treaty focusing on the rights of expatriate citizens, the Irish border and a financial settlement to cover outstanding British commitments to the EU.

“This sequencing is not done to create problems, or as some kind of punishment for the United Kingdom,” Barnier, a former French foreign minister and EU financial services commissioner said. “It is there to solve problems and put them in the right order.

“It is there to create the basis of trust,” he added. “We have to lay down a foundation of trust which we will need to construct the future relationship with the United Kingdom.”

Responding to a charge during the debate from Nigel Farage, leader of the UK Independence Party, that Brussels was trying to “bully” Britain and was seeking 100 billion euros (£85.8 billion) or more in a financial settlement, Barnier warned that Farage’s suggestion that Britain should simply walk out without a deal was unwise.

“The option of no deal or a bad deal does not come from me,” said Barnier, who has previously said that a threat by May to leave with no deal would be much more disruptive for Britain than it would be for the Union: “We want to reach an agreement with the United Kingdom, not against the United Kingdom.”

He repeated that he had never himself cited a figure for the possible bill Britain would have to pay. His priority is to agree how it should be calculated, while the actual final amount will depend on developments in the EU budget among other things.

“We will work with the British, calmly and without fuss,” he said, “To find an agreement on the commitments which have been made. There is no punishment, there is no ‘exit bill’.”

(Writing by Alastair Macdonald in BrusselsEditing by Jeremy Gaunt.)

‘Hostile to privacy’: Snowden urges internet users to get rid of...

Number of refugees heading to Europe from Turkey reaches 80,888