Prayer were held for slain journalist in Istanbul, a day after a Saudi prosecutor admitted the writer’s body was dismembered by Saudi agents in the kingdom’s Istanbul consulate. Similar prayers were held in the cities of Mecca and Medina.

Hundreds of people in Istanbul joined the funeral prayer for slain Saudi journalist Jamal Khashoggi, who was killed in Saudi Arabia’s Istanbul consulate last month, after hopes to recover his remains faded following reports the body was chemically dissolved by the Saudi agents.

Funeral prayers for Khashoggi were also held in the holy mosques of Mecca and Medina in Saudi Arabia.

On Thursday, Khashoggi’s son, Salah Khashoggi, announced his family will receive people expressing condolences for his father’s death at their house in Jeddah.

Khashoggi, a frequent contributor to the Washington Post, was killed on October 2 inside the Saudi consulate in Istanbul by a 15-member Saudi squad.

After weeks of denying any involvement in the crime, Riyadh admitted that Khashoggi had been killed inside the consulate but claimed the Saudi royal family had no prior knowledge of any plot to murder the journalist.

His body has yet to be returned to his family, which has been requesting its return, amid reports that it was chemically dissolved.

61 people are talking about this

In Turkey, the major funeral prayer was held in Istanbul’s Fatih Mosque.

Prior to the event, Yasin Aktay, a presidential adviser, said Khashoggi would receive a “worthy” funeral prayer now that his death had been confirmed.

“This is definitely not the only duty we have towards him. We will continue to bear witness to all that he sought for us to see,” Aktay said. 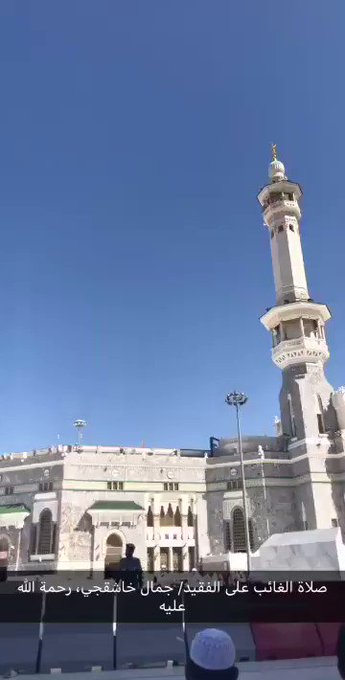 91 people are talking about this

He underlined that Turkey’s reputation was the actual target with the aim to portray the country as if it were unsafe and unreliable.

“Through a small precaution he took thanks to his foresight, he ensured that this conspiracy backfired on its plotters. In this sense, he died protecting Turkey from one of the most dangerous attacks it has faced in its history,” he said.

“Saudi Arabia speaks of the execution of some involved in the crime, but we do not want their execution. What we want is, this cruelty, this barbarism and those who committed that brutality, to be prosecuted,” said Turan Kislakci, head of the Turkish-Arab Media Association, in Istanbul.

“All those involved in the crime should be brought to justice.”