EU defiant in face of Trump threats over Iran trade

The EU foreign affairs foreign encouraged companies to ignore US President Donald Trump’s threats on doing business with Iran. She said it’s up to Europeans to decide who they trade with. In her response, Mogherini said it was up to European companies to decide who they trade with. She voiced support for trade as an integral part of the Joint Comprehensive Plan of Action (JCPOA), commonly known as the Iran nuclear deal, in which Iran pledged to stop its nuclear program in return for the relaxation of sanctions and increased trade relations.

Read more: How the EU plans to get around US sanctions on Iran

The JCPOA was signed by Iran, China, France, Russia, the United Kingdom, Germany, the EU and the United States in October 2015.

Trump, who has called the JCPOA, “the worst deal in history,” withdrew the US from it in May of this year. He reinstated harsh sanctions on Iran on Monday. Iran has accused the US of going back on its word and sowing economic unrest in the country.

Mogherini says that Iran is continuing to uphold its end of the bargain and that the other signatories must also uphold theirs. “We are doing our best to keep Iran in the deal, to keep Iran benefitting from the economic benefits that the agreement brings to the people of Iran because we believe this is in the security interests of not only our region but also of the world.”

Read more: US reimposes sanctions on Iran: What does that mean?

She went on to say that Iranian-EU trade relations are, “a fundamental aspect of the Iranian right to have an economic advantage in exchange for what they have done so far, which is being compliant with all their nuclear-related commitments.” 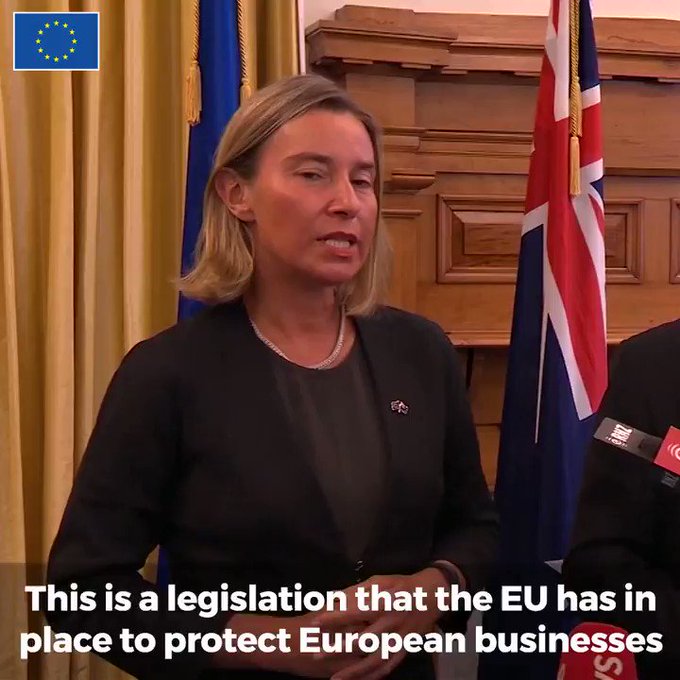 #IranDeal “We updated our Blocking Statute [..] this legislation protects European businesses from the effects of the US sanctions” @FedericaMog http://europa.eu/!RR33kt

Mogherini emphasized: “We are encouraging small and medium enterprises in particular to increase business with and in Iran as part of something [that] for us is a security priority.” Though the EU, which said it “deeply regretted” the US move, issued a “blocking statute” on Monday in an effort to protect European companies, several, such as Germany’s Daimler, announced they would comply with Trump’s wishes rather than put their US investments at risk.

The reimposed US sanctions target financial transactions involving US dollars, metals — including gold — coal, the automotive sector and the purchasing of commercial aircraft. Oil prices rose Tuesday as a result of Washington’s move. Iran, an OPEC member and the world’s fifth-largest oil producer, faces stricter sanctions yet in November; when a second round of sanctions aimed at the industry are scheduled to go into effect.

Read more: Iran deal: compromise with US is ‘far away,’ says Germany

White House National Security Advisor John Bolton — a long-time proponent of regime change in Teheran — echoed President Trump’s offer to meet with Iranian leaders on Monday, saying: “If the ayatollahs want to get out of the squeeze, they should come and sit down. The pressure will not relent while the negotiations go on.”

Iranian President Hassan Rouhani, speaking on Iranian television before sanctions were reimposed said: “If you stab someone with a knife and then say you want talks, then the first thing you have to do is remove the knife.” Rouhani added, “We are always in favor of diplomacy and talks … but talks need honesty.”

Pakistan Nuclear Energy: Why don’t they let us eat cakes?