LONDON Well over a million people in Britain have signed a petition calling for U.S. President Donald Trump’s planned state visit to be cancelled to avoid embarrassing Queen Elizabeth, in a grassroots backlash against his immigration policies.

But Prime Minister Theresa May, seeking closer ties to Washington as Britain seeks to withdraw from the European Union, made it clear she would not consider any cancellation.

The invitation to make a state visit, which will involve lavish displays of royal pageantry and a banquet hosted by the monarch, was conveyed by May when she visited Trump in Washington last week.

May came under pressure to cancel the visit after Trump issued an executive order barring Syrian refugees from the United States and suspending travel from seven Muslim-majority countries, stirring protests at home and abroad.

The petition against the state visit, which is on the British parliament’s website, passed the one million mark on Monday, triggering what is scheduled to be a three-hour emergency debate. Parliament cannot however force cancellation.

“Donald Trump should be allowed to enter the UK in his capacity as head of the US government, but he should not be invited to make an official State Visit because it would cause embarrassment to Her Majesty the Queen,” the petition said. 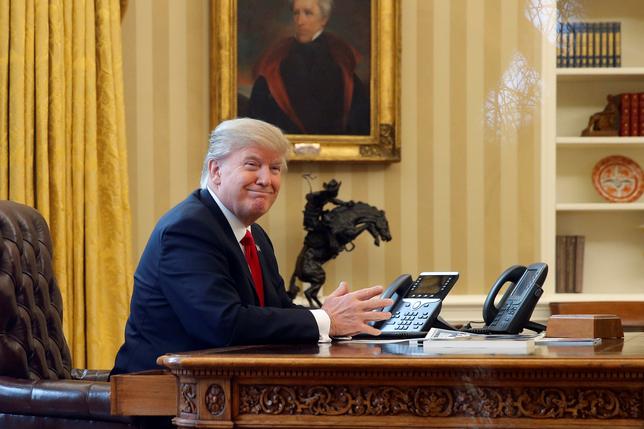 U.S. President Donald Trump waits to speak by phone with the Saudi Arabia’s King Salman in the Oval Office at the White House in Washington, U.S. January 29, 2017. REUTERS/Jonathan Ernst

Foreign Secretary Boris Johnson was questioned for over an hour in parliament on Trump’s executive order, declaring that his approach on immigration was not one the British government would take. He called it highly controversial, divisive and discriminatory, but added:

“It is totally right that the incoming president of our closest and most important ally should be accorded the honour of a state visit, and that is supported by this government,” he said.

But a growing list of politicians called for the visit to be cancelled, including lawmakers from the ruling Conservative Party, opposition Labour Party leader Jeremy Corbyn and London Mayor Sadiq Khan, who is a Muslim.

“We must now rescind the offer of a full state visit for President Trump — until this ban is lifted. I don’t believe the people of London will support rolling out the red carpet until this happens,” Khan wrote in the Evening Standard newspaper.

May’s Downing Street office signalled that cancelling the visit was not on the cards.

“To be clear, the prime minister extended an invitation on behalf of the Queen – and she was very happy to do so. The USA is one of this country’s closest allies, and we look forward to hosting the president later this year,” Downing Street said.

The petition against the visit, collecting 1.3 million votes by Monday mid-afternoon, was the second most popular ever on the parliamentary website, after one calling for a second referendum on membership of the European Union drew more than four million signatures last year.

A year ago, parliament debated a petition calling for Trump, then a presidential candidate, to be barred from the United Kingdom. It gathered close to 600,000 signatures before it was closed last June.

Britain appalled by murder of Pakistani woman stoned to death

Convicted US national ‘Israeli spy’ Pollard greeted by Netanyahu as he...