Labour leader Jeremy Corbyn got a rock star reception at Glastonbury Festival on Saturday, telling a headliner-sized crowd that millions of young people who voted for him would not be silenced or sidelined.

Dismissed as a left-wing no-hoper before elections on June 8, Corbyn attracted a surge of support from 18-24 year-olds that helped his Labour Party deny Prime Minister Theresa May a parliamentary majority.

The 68-year old’s popularity at Worthy Farm in south-west England could be measured by the number of pro-Corbyn banners on display and Corbyn T-shirts.

They easily outnumbered those for the biggest names on the musical bill – Radiohead, Foo Fighters and Ed Sheeran – and the chant “Oh, Jeremy Corbyn” rang round the world’s biggest greenfield festival.

Appearing between British singer-songwriter Craig David and U.S. rap act Run The Jewels, Corbyn – who promised during campaigning to abolish tuition fees – said he was proud to have led Labour into an election that delivered the biggest increase in the party’s support since 1945.

“And that politics that got out of the box isn’t going back into the box.”

Corbyn, invited to speak on the famous stage by festival founder Michael Eavis, said Glastonbury was about people coming together in support of causes like environmentalism. 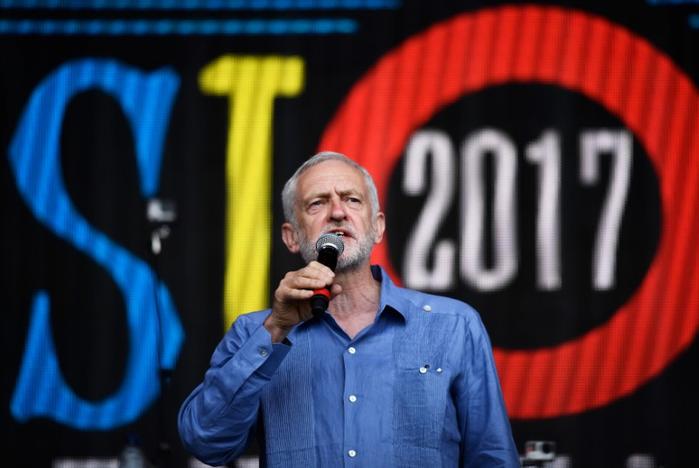 “There is only one planet – not even Donald Trump believes there is another planet somewhere else,” he said.

“He makes an effort to connect with people, and people connect back with him,” she said.

She said she wasn’t surprised by his support among young people, having seen his popularity rise on social media. “I don’t read newspapers, I don’t know anybody who does,” she said.

But not every young person was won over. “It’s very smart to target our age with tuition fees,” said 18-year old Hannah, who voted for the first time on June 8. “He’s targeting the naive of our generation.”

Corbyn pulled out of a Glastonbury visit last year after the country voted to leave the European Union just as the festival started.

Billy Bragg, the singer, songwriter and activist who runs the Leftfield politics and music stage, said Brexit had shocked young people into becoming interested in politics, and their influence had been seen a year later.

“Even if it wasn’t the youth ‘what won it’, the engagement among young people has shot up,” he said.

“If it can be sustained, it’s a sea change in British politics because it means that all parties will have to take their views into account.”

An undercurrent of politics also swirled around the Other Stage, where former Oasis frontman Liam Gallagher ended his set by asking the crowd to join in a rendition of “Don’t Look Back in Anger” in memory of the victims of recent terror attacks in Manchester and London, and the Grenfell Tower fire.

Pollster Ipsos Mori said week that age had been a bigger dividing factor on June 8 than in any election since it began keeping records in 1979, with the biggest rise in turnout coming from the young, although they were still far less likely to vote than the old.

Both main parties increased their share of the national vote compared with 2015, at the expense of smaller parties. But Labour’s share increased by 9.5 points to 40 percent, while the Conservatives’ rose 5.5 points to 42.4 percent.