A top European conservative has leaked a 2014 agreement with the rival center-left alliance, saying a conservative should succeed Martin Schulz as European Parliament president. The liberals now see it differently.

Manfred Weber (l) and Martin Schulz (r) both signed the 2014 paper, but it may not be honored

As the fight between the center-left and center-right for the top job in the European Parliament is getting increasingly heated, the conservative European People’s Party (EPP) leaked a secret agreement on Tuesday – one that their rival Progressive Alliance of Socialists and Democrats (S&D) may not abide by.

According to the document, the EPP and S&D coalitions in the EU parliament made a deal that the two groups “shall support each other in the election of the President of the European Parliament.” Peter Müller, a journalist working for German news magazine Der Spiegel, published the leaked documents on Twitter. 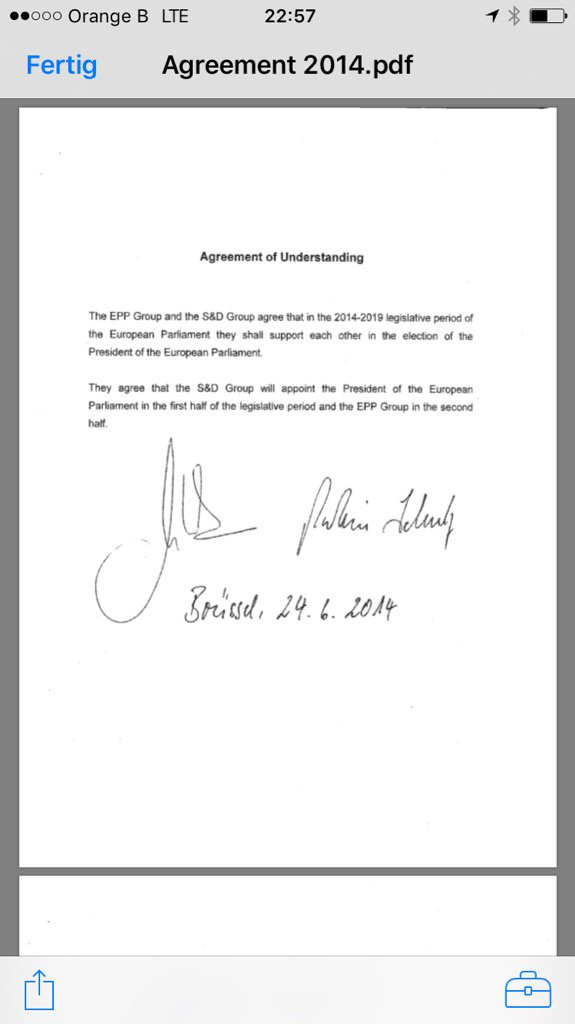 The document states that president Martin Schulz of the Progressive Alliance of Socialists and Democrats (S&D) should be succeeded by a member of the conservative European People’s Party (EPP) mid-term. It was signed by Martin Schulz, who was then the head of the S&D parliamentary group, and by Manfred Weber, the head of the EPP parliamentary group, on June 24, 2014. The liberal EU coalition, the ALDE Group, also joined the agreement.

The current EU parliament was elected in May 2014. The end of 2016 thus marked the middle of the 5-year parliamentary term.

EU president Martin Schulz confirmed that he would step down in November 2016; now he’s eyeing a prominent job with the Social Democrats back in his home country Germany, possibly parachuting straight in as foreign minister.

The new EU president will be voted into office on January 17. The S&D group has now designated a candidate – Gianni Pittella, the current head of the group – to run against EPP candidate Antonio Tajani. No single group in the EU parliament has a majority of the votes, so any successful candidate will need support from others. If the EPP and S&D agreed on a candidate, then his or her appointment would be guarantede.

In a letter to his EPP colleagues, the bloc’s chairman Manfred Weber said that breaking the agreement could help anti-EU forces gain traction.

The S&D has argued that a member of their party should become president because otherwise, all three top EU positions would be filled with conservatives, with Luxebourg’s Jean-Claude Juncker heading the EU commission and Polish conservative Donald Tusk heading the European Council. On top of this, the EPP’s pick has courted controversy because Tajani is seen as a close ally of controversy-riddled former Italian Prime Minister Silvio Berlusconi.

Reversing himself after years, Trump concedes Obama was born in U.S.