China on Monday hit back at allegations that it was “aggravating tensions and destabilizing” the South China Sea after it had conducted military training in the region and called Washington the real “threat” to the area with its military footprint.

On Friday, China landed several combat aircraft for the first time – including the long-range, nuclear strike-capable H-6K – at an island airfield in the sea. The United States immediately responded, condemning China has “continued militarization of disputed features in the South China Sea”.

“The South China Sea islands are Chinese territories,” foreign ministry spokesperson Lu Kang told a regular briefing. “The movement was part of the normal training for the Chinese military. Overinterpretation regarding the issue is unnecessary.” 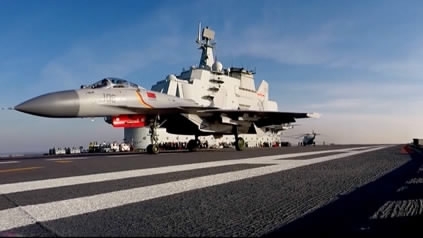 Liaoning aircraft carrier is under training in the South China Sea. /CGTN Photo

Lu added that the real danger is posed by “unrelated party”, hinting at the US, as the country – lies thousands of miles away from the South China Sea – “still sent its own warships and planes”.

The Philippines on Monday said it has taken “appropriate diplomatic action,” stressing that it is concerning the impact of the training on “maintaining peace and stability in the region,” said the presidential spokesman Harry Roque during a regular media briefing.

China has built a string of artificial islands in contested areas of the South China Sea since 2013 and installed an array of airbases, radar systems and naval facilities that will allow it to project power over hundreds of kilometers in the ocean where the US Navy’s dominance previously faced few serious challenges.

The Populist-Driven Foreign Policy of Armenia is a Call for Regional...