Raquel Carvalho  : A little piece of anti-corruption history was made yesterday when Britain’s top diplomat in Hong Kong inked an agreement with Macau’s justice chief that will see a multimillion-dollar chunk of the ill-gotten gains of a disgraced Macau official stashed in British bank accounts returned to the gambling hub.

The deal was signed by British Consul General Caroline Wilson and Macau’s secretary for administration and justice, Sonia Chan Hoi-fan, at a ceremony in the city yesterday. It will see some 350 million patacas in illegal earnings from disgraced former public works chief Ao Man-long transferred from Britain to the Macau government.

It is the first time Britain has repatriated proceeds of crime under the UN Convention against Corruption, which London signed in 2003 and ratified in 2006. Macau is also covered.

Ironically, the agreement comes as Macau property mogul Ng Lap-seng faces allegations in the United States that he is a key player in a money-laundering and bribery racket involving former top UN officials.

It also comes as Ao’s wife, Chan Meng-ieng, 55 – who was sentenced to 23 years in jail in absentia in 2008 for money laundering – remains at large, reportedly in Britain with the couple’s two children.

Asked about her whereabouts yesterday, both sides said they had no information on the matter. Ao’s wife is the subject of a “red notice” issued by the global police organisation Interpol. 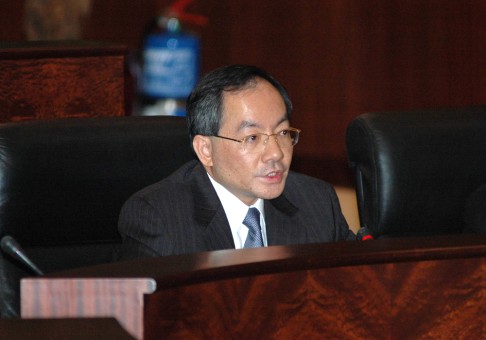 Former secretary Ao, who is serving 29 years in jail for corruption and money laundering, had bank accounts in Macau, Hong Kong and Britain.

The Macau government formally asked London for assistance in May 2010.

Chan praised the “smooth and successful cooperation” with Britain.

Wilson said: “It would be correct to refer to nine years of hard work on both sides. Without doubt, this case demonstrates that we are more determined than ever to tackle corruption.”

The exact breakdown of the assets was not provided but Chan said the amount included the value of the flat. 440 million patacas of Ao’s illicit assets stashed in Hong Kong banks had already been returned.

Macau’s anti-graft agency had previously said that the former transport secretary, who was arrested in 2006, had assets exceeding 800 million patacas.