HomeAll ArticlesBrexit talks warmer after May's speech, but no closure
All ArticlesDiplomatsFeaturedNews

Brexit talks warmer after May’s speech, but no closure

BRUSSELS (Reuters) – The European Union and Britain made progress in the latest round of divorce talks, but not enough to move to the next phase of discussions on a transition period after Brexit or a future trade deal, top negotiators said on Thursday.

“We have had a constructive week, yes, but we are not yet there in terms of achieving sufficient progress. Further work is needed in the coming weeks and months,” chief EU negotiator Michel Barnier told reporters, praising a “new dynamic” created by concessions made last week by Prime Minister Theresa May.

She had hoped that a speech she made in Florence on Friday would unblock the three-month-old talks and pave the way for the EU to open discussions on a post-Brexit free trade deal, by allowing Barnier to tell EU leaders that there is “sufficient progress” on three key “divorce” issues – rights for expatriate citizens, the Northern Irish border and Britain’s exit bill.

Differences over the role of the European Court of Justice and how much London will owe Brussels remain major obstacles.

Officials involved said there had been a better atmosphere this week. One EU official said May had averted the “train crash” which might have resulted from another week of stubborn deadlock. That would have increased risks of Britain simply crashing out of the Union into legal limbo in March 2019.

British Brexit Secretary David Davis said the talks achieved “considerable progress” over the four days in Brussels. He repeated his eagerness to move on to discuss what happens after Brexit and the two-year transition period which May requested, during which Britain would remain in the EU single market.

“We must never forget the bigger picture. Britain wants to be the European Union’s strongest friend and partner,” he said, echoing May. “I leave Brussels optimistic about this future.”

Officials said transition issues were not raised this week. 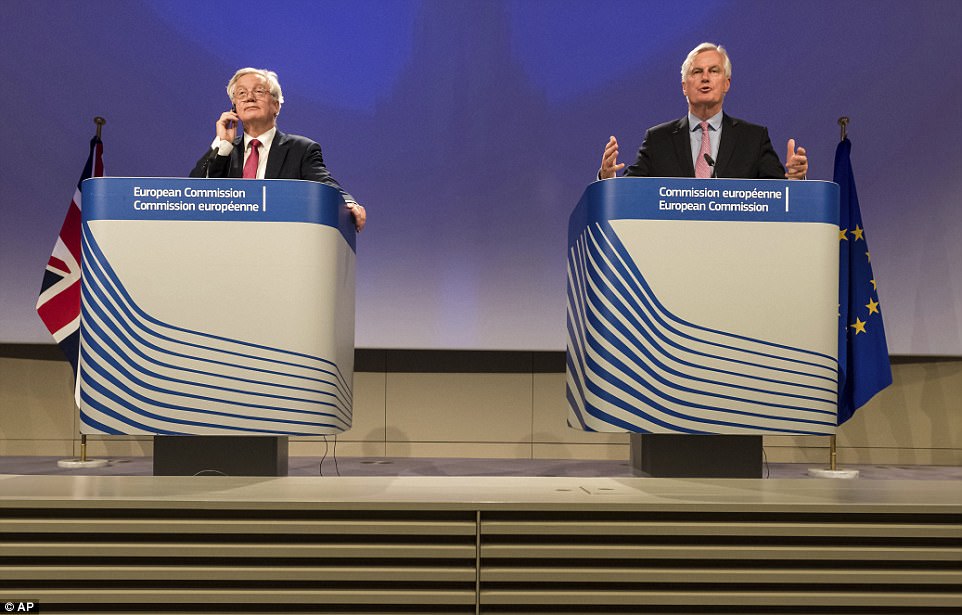 Barnier said he would “take stock” of progress with leaders of the other 27 EU states at a Brussels summit in three weeks time, a week after the next negotiating round. But he gave no indication of how likely he is to recommend opening trade talks. And “sufficient progress” has been deliberately left undefined.

EU diplomats doubt Barnier will be satisfied by October and many see a December summit as a more likely moment to open the trade negotiations. However, officials said there could be some blurring of the EU refusal to discuss post-Brexit issues if the sides narrow differences and gain confidence in settling terms.

Barnier highlighted two key areas of disagreement – on the legal protection for the rights of the 3 million EU citizens in Britain and on a pre-Brexit settlement from Britain for a share of outstanding financial commitments made during its membership.

New figures from EU auditors on Thursday showed that the sum at stake may be growing as talks continue, simply due to delays in the bloc’s spending of already agreed payments.

May said on Friday that Britain would ensure the other 27 were not out of pocket in the current EU budget period and that it would “honour commitments”. Barnier expressed disappointment that negotiators had made clear she meant to end those budget payments in 2020, even though payments from the current 2014-20 budget will go on for some years beyond that. And London had given him no detail on what other commitments it would meet.

On citizens’ rights, he welcomed Davis’ confirmation that the treaty guaranteeing them should now have “direct effect” in British law. That tightens a link between what the EU negotiates and what its citizens can count on in future in British courts.

But the Union continues to demand that people also have the right to pursue grievances at the EU’s own court in Luxembourg – a red line for a British government keen to show voters who backed Brexit last year that they have taken back control.

Welcoming a guarantee that Britain would safeguard rights in a way “consistent with EU law”, Barnier said: “We failed to agree that the European Court of Justice must play an indispensable role in ensuring this consistency.”