Amir Khan staked his claim for a shot at Floyd Mayweather with a masterful points win over Devon Alexander in Las Vegas.

The British utilised his superior speed and footwork while dominating the American and took a unanimous points win with scores of 119-109 118-110 and 120-108.

There has been speculation that Mayweather, the biggest name in boxing, would consider a fight against the winner, but it remains to be seen whether Khan will be granted a shot at the American superstar, who overlooked him last year.

In the opening round, Khan appeared keen to stamp his authority and quickly gained Alexander’s attention with a flurry of punches. But the St Louis man stood firm and answered with a stiff left hand, before clipping his foe around the back of the head.

The searing speed of Khan was showcased in the second as he unloaded a left-right combination. Another lightning one-two appeared to trouble Alexander, drawing a smile from the Bolton man.

There was more patience from Khan in the third as he darted in with crisp combinations, while a bemused Alexander was tagged by a crunching body shot in the fourth.

Showing signs of frustration, Alexander tried to force the fight in the fifth and landed a decent left, but Khan maintained his newfound discipline and answered with a straight right.

The pace dropped a little in the sixth, but the Brit still found his range with a rasping left-right, and then unloaded a jolting uppercut in the seventh.

Khan appeared in total command, but Alexander, a two-weight champion, offered a reminder of his threat with two right hands in the eighth.

Heeding this warning, Khan returned to his raiding tactics in the ninth, stabbing out stiff punches before dancing out of range.

After passionate pleas in his corner, Alexander marched out for the 10th, but only walked onto precise punches and appeared a beaten man as he was tagged from all angles in the 11th.

There was no need for risk taking in the last and Khan withstood the few desperate punches that came from Alexander.

All three judges awarded a wide points verdict to Khan , who believes he should be next in line to face Mayweather, despite his recent comments about a possible fight with old rival Manny Pacquiao.

“Look, last year it didn’t happen and I really believe that I’ve earned my shot at the best fighter in the world which is Floyd Mayweather,” said Khan.

“Khan versus Mayweather will be huge, the UK fans will come to watch and come to support and we’re going to take the belt off him.

“I really believe that Floyd will have big problems with my speed, movement and accuracy. Floyd is one of the best fighters in the world, don’t get me wrong, but I want my chance.”

Alexander, a two-weight world champion, admitted he was outclassed.

And even with all his experience and being a southpaw as well, he struggled to cope with his opponent’s clever movement and offered the winner some credit.

“I don’t want to make no excuses, he was the better man tonight,” he said. “I wasn’t good enough like I planned.

“He was running a lot, but that was no excuse, I could have caught him. I worked hard in the gym.

“I was moving good, I was catching the jab good, but I wasn’t good enough.” 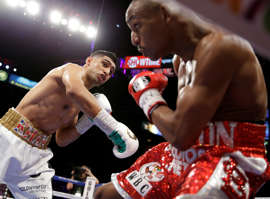