McDonald’s received a lukewarm reception when it opened a new branch just steps from St. Peter’s Square last month, but on Monday the fast food giant accepted a challenge to adopt one of Pope Francis’s cherished principles – feeding the hungry.

The new restaurant, whose opening in a Vatican-owned building on Dec. 30 upset some purists, donated dozens of meals on Monday to a charity which distributed them at a walk-in clinic in Rome.

Pope Francis has made defense of the poor and needy a cornerstone of his papacy, setting up shower stalls for the homeless near the Vatican, offering meals and even a VIP-style visit to the Sistine Chapel. 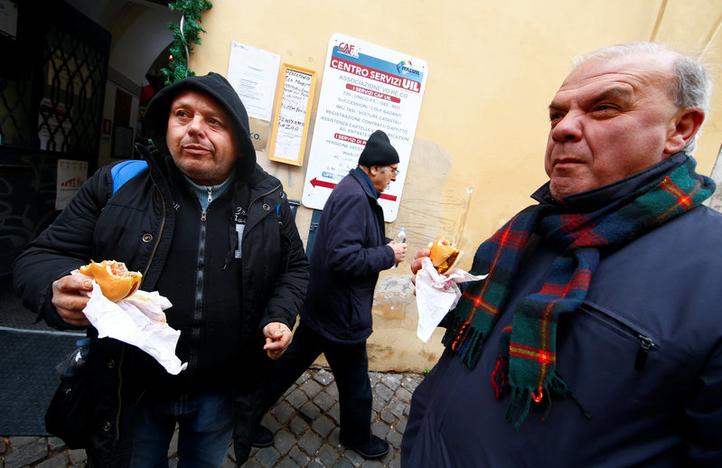 On Monday, homeless and needy people came to claim their double cheeseburger, chopped apple and bottle of water.

Pierfrancesco Spiga, 46, a Rome native who lost his job as a gardener and now sleeps in a residence run by a cooperative, said other companies should take up the initiative.

“It would be good if these multi-national companies gave food at the end of the day to poor people who don’t have any, instead of throwing it away,” Spiga said.

Some cardinals disapproved of the Vatican’s leasing the building on the cobble-stoned Borgo Pio to the U.S. chain, and one said the space would be better used to shelter the needy.

McDonald’s, which did not comment on the initiative, pledged 1,000 meals which will be distributed by the Medicina Solidale charity over the next six months.

The project was born when Medicina Solidale’s director wrote to McDonald’s after the controversy over the site, charity representative Fotini Iordanoglou said outside the restaurant just steps from St. Peter’s Square.

“McDonald’s responded, giving us this chance to help,” Iordanoglou said. “We absolutely won’t resolve hunger but we are trying to give a small meal to people who need it.”

Fifty lunches were served on Monday. A spokesman for the non-profit group said they hope to offer 100 once a week, and will look into whether the project can be made permanent.