Afghans voted in presidential elections amid tight security Saturday, even as insurgents attacked polling centers in a series of blasts across the country that left at least one person dead.

The first-round vote marks the culmination of a bloody election campaign that is seen as a close race between President Ashraf Ghani and his bitter rival Abdullah Abdullah, the country’s chief executive.

Wary authorities placed an uneasy Kabul under partial lockdown, flooding streets with troops and banning trucks from entering the city in an effort to stop would-be suicide bombers targeting residents as they cast their votes.

By midday, the toll appeared relatively light compared to previous elections, though Afghan national authorities provided little, if any, information about reported blasts.

One person was killed and two others wounded in an explosion near a polling center in Jalalabad in the eastern province of Nangarhar, provincial governor’s spokesman Attaullah Khogyani said.

And at least 16 people were wounded in the southern city of Kandahar when a bomb went off at a polling station, a hospital director told AFP, while officials across the country reported several small explosions at other election sites.

The Taliban, who unleashed a string of bombings during the two-month election campaign, claimed to have hit several polling stations.

Officials with Afghanistan’s Independent Election Commission (IEC) said they have had no contact with 901 of the 4,942 polling centers across country as voting is under way.

“We sent materials to 4,942 centers, but we received some reports that only 4,041 centers are open, ” said Hawa Alam Nuristani, the head of the IEC, in the capital Kabul.

A second IEC official said they have had no contact with 901 polling centers across the country.

It was not clear whether voting had taken place in these 901 centers, or they were forced to shutdown by the Taliban.

Authorities said 431 polling centers will stay closed because it was impossible to guarantee their security since they were either in areas under Taliban control or where insurgents could threaten nearby villages. 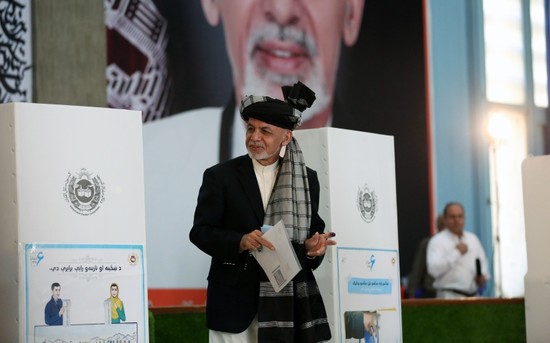 Having voted at a high school near the presidential palace in Kabul, Ghani said the most important issue was finding a leader who could bring peace to the war-torn nation.

“Our roadmap (for peace) is ready, I want the people to give us permission and legitimacy so that we pursue peace,” Ghani said.

Some 9.6 million Afghans are registered to vote, but many have little faith that after 18 years of war any leader can unify the fractious country and improve basic living conditions, boost the stagnating economy or bolster security.

“I know there are security threats but bombs and attacks have become part of our everyday lives,” 55-year-old Mohiuddin, who only gave one name, told AFP.

“I am not afraid, we have to vote if we want to bring changes.”

Abdullah and Ghani both claimed victory in the 2014 election — a vote so tainted by fraud and violence that it led to a constitutional crisis and forced then-U.S. president Barack Obama to push for a compromise that saw Abdullah awarded the subordinate role.

“The only request I have from the election commission is that they ensure the transparency of the election because lots of people have lost their trust,” Afghan voter Sunawbar Mirzae, 23, said. 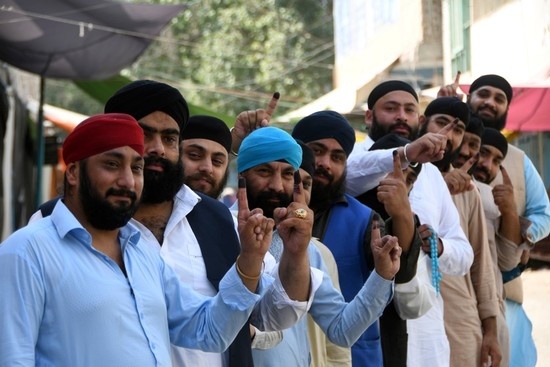 Afghan Sikhs show their inked fingers after casting their votes at a polling station in the city of Jalalabad. (AP Photo)

Many Afghans said voting had gone smoothly, triumphantly holding up fingers stained in indelible ink to show they had cast a ballot, but several said they had experienced problems.

“I came this early morning to cast my ballot. Unfortunately my name was not on the list,” said Ziyarat Khan, a farmer in Nangarhar. “The whole process is messy like the last time.”

Even in the early hours of voting, complaints had begun to be raised such as polling stations in the capital’s posh Wazir Akbar region opening late and biometric machines, aimed at curbing fraud, not working.

In Kabul’s northern Taimani neighborhood of mostly ethnic Hazaras, two-thirds of the voting registration papers had yet to arrive and angry voters were told their names were not on the list.

Abdul Ghafoor, who spoke on behalf of dozens of men waiting to cast their ballot, said that of about 3,000 registered voters only 400 appeared on the list that had arrived at the center.

Ghafoor said he was told to return at 2 p.m. and that he would be allowed to vote even if his name was not on the list and without using the biometric machine.

Ahmad Shah, 32, cast his vote, but said the election worker forgot to ink his finger — which is mandatory to prevent multiple voting by the same person.

“What sort of system is this?” he asked, frustrated that he had risked his safety to vote and expressed fear that fraud will mar the election results. “It’s a mess.”

“It is the only way to show the Taliban we are not afraid of them,” he said, though he too worried at the apparent glitches in the process.

Campaigning was hampered by violence from the first day, when Ghani’s running mate was targeted in a bomb-and-gun attack that left at least 20 dead.

Bloody attacks have continued to rock Afghanistan, including a Taliban bombing at a Ghani rally last week that killed at least 26 people in the central province of Parwan near Kabul. 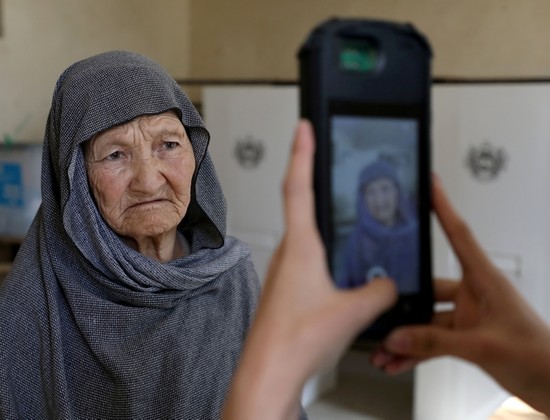 An election commission worker takes a photo of an voter before casting a vote at a polling station in Kabul. (Reuters Photo)

Election officials say this will be the cleanest election yet, with equipment such as biometric fingerprint readers and better training for poll workers to ensure the vote is fair.

Still, the U.S. embassy in Kabul has said it is “disturbed by so many complaints about security, lack of an equal playing field and fraud” and many Afghans say they have no intention of voting, citing fraud and security fears.

Saturday’s poll was initially slated to take place in April, but was twice delayed because election workers were ill-prepared, and the U.S. was leading a push to forge a withdrawal agreement with the Taliban.

That deal has been scampered for now as U.S. President Donald Trump pulled out after violent attacks in Kabul killed 12 people, including two U.S.-led coalition soldiers, one of whom was American. Afghanistan’s next president will likely face the daunting task of trying to strike a bargain with the Taliban.

While many of the presidential candidates withdrew from the election, none formally did so, leaving all 18 candidates on the ballot.

Results are not expected until October 19. Candidates need more than 50 percent of the vote to be declared the outright winner, or else the top two will head for a second round in November.

Neighbor Pakistan, routinely accused of aiding insurgents, announced it was closing its borders with Afghanistan Saturday and Sunday to further protect security in the war-weary country.

Campaigning for Saturday’s elections was subdued and went into high gear barely two weeks ahead of the polls as most of the 18 presidential candidates expected a deal between the United States and the Taliban to delay the vote. But on Sept. 7, President Donald Trump declared a deal that seemed imminent dead.

‘My parents always encouraged me to paint’ – Ramina Saadatkhan