Britain’s economy is likely to feel the pain of Brexit more sharply in the coming years despite holding up well so far, according to finance minister Philip Hammond’s latest plan to steer the economy through its split from the European Union.

Hammond, announcing an annual budget shortly before Britain is due to launch its Brexit divorce process, said the world’s fifth-biggest economy had so far “continued to confound the commentators” by withstanding the referendum shock.

The economy is on course to grow by 2.0 percent in 2017, up from a forecast of 1.4 percent made in November, according to official forecasts.

But growth from next year to the end of the decade would be weaker than previously thought and would only return to 2.0 percent in 2021.

Faced with that outlook, Hammond said he would stick to his plan to bring down what remains one of the biggest budget deficits among the world’s rich nations.

“The only responsible course of action … is to continue with our plan, undeterred by any short-term fluctuations,” he told parliament.

However, the Office for Budget Responsibility (OBR) which provides the official forecasts that underpin the budget, said Hammond’s plans did not look ambitious enough for him to meet his goal of balancing the budget in the early 2020s, especially given rising healthcare costs from an aging population.

To address the challenge of taxing the growing number of self-employed workers, Hammond said they would pay a higher rate of national insurance contributions, angering some who accused the government of breaking the spirit of an election promise.

Kevin Nicholson, head of tax at PwC, said the government had found a way to raise more revenues after promising no increases in conventional income tax. “This has opened up a big potential money spinner,” Nicholson said.

Hammond also made it harder for directors and owners of small firms to take tax-free money out of their companies, by cutting a dividends allowance, which will also hurt Britons with big share investments outside tax-protected pension schemes. 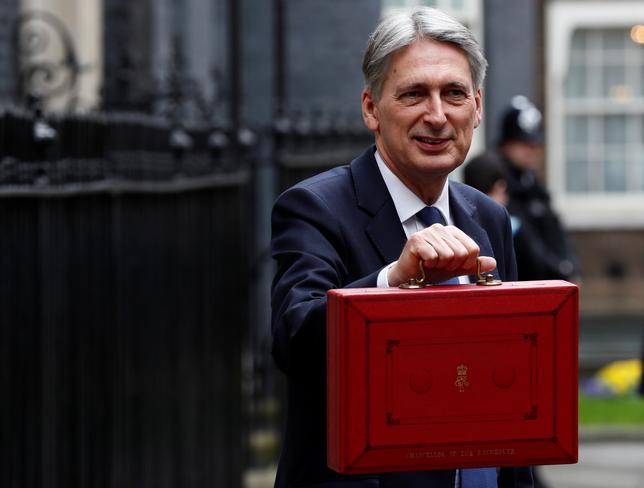 Britain’s Chancellor of the Exchequer Philip Hammond stands outside 11 Downing Street before delivering his budget to the House of Commons in London, March 8, 2017. REUTERS/Stefan Wermuth

To address one of the most visible strains on public services, he announced a 2 billion-pound increase in funding for social care over the next three years.

But all new spending commitments were funded by his budget plan, he said, meaning no extra borrowing to pay for them.

Since becoming finance minister last year, Hammond has eschewed budget gimmicks and instead wants to build a reserve fund in case the economy needs help as Brexit plays out.

In his speech to parliament, he joked that he had to defend his nickname “Spreadsheet Phil”.

“If the economy weakens over the rest of the year or the Brexit negotiations get tricky, we can expect some of this ammunition to be spent in this year’s November budget,” David Tinsley, an economist with Exane BNP Paribas, said.

The vote in June to separate Britain from the EU, which buys about half of its exports, had been expected to deliver an immediate and heavy below to the economy.

Instead, consumers continued to spend and helped gross domestic product to grow by 1.8 percent in 2016, faster than all other Group of Seven economies bar Germany.

Signs are now emerging that shoppers have turned more cautious as inflation rises, pushed up by the tumble in the value of the pound following the referendum. And the uncertainty about Britain’s ties with the EU is likely to make some companies wary about long-term investments.

But for this year, the news in Hammond’s budget was upbeat.

The stronger-than-expected economic growth since June means Britain’s budget deficit is likely to fall faster than previously thought in the current financial year to just under 52 billion pounds, or 2.6 percent of GDP – a nine-year low.

The OBR now expects the government will need to borrow 23.5 billion pounds less from 2016/17 to the 2020/21 financial year than it projected in November.

However, most of that was due to the sharp improvement in the 12 months to the end of March this year, underscoring the challenge further ahead.

Economists said the forecasts did not include the risk of a hefty divorce bill for Britain when its leaves the EU.

The public finances are still expected to be in the red by the 2021/22 financial year, the last in the OBR’s forecasts.

That represents a slower pace of deficit reduction than Hammond’s predecessor, George Osborne, planned a year ago, when he hoped to return the public finances to surplus by 2019/20.

104 arrested in operations against FETÖ’s military network in Turkey

Why Berlin Fashion Week is running away from the runway

‘Brexit in peril’ as PM May faces heavy defeat