Irish nationalists Sinn Fein and the pro-British Democratic Unionist Party were neck-and-neck on Friday almost halfway through the counting of votes in a snap election that could dramatically shift the balance of power in Northern Ireland.

Voters turned out in their highest numbers in two decades on Thursday in the first regional election in the United Kingdom since its vote to leave the European Union as nationalists who favour a united Ireland and unionists who want the province to remain British jostle for influence.

The DUP won 28.1 percent of first preference votes but Sinn Fein almost wiped out the 5-percentage point gap at an election last year by capturing 27.9 percent, meaning that after 800,000 ballots were cast, just over 1,000 votes split the main parties.

Under a voting system where candidates capture preferences of eliminated rivals and surplus votes of those elected, Sinn Fein, the former political wing of the IRA, stood a chance of becoming the largest party for the first time.

“It looks as if it’s been a very good day for Sinn Fein. We’ll have to see, it’s early days,” DUP leader Arlene Foster, whose handling of a botched green energy scheme Sinn Fein blamed for its collapsing of the devolved government, told Sky News.

Sinn Fein’s leader Michelle O’Neill told journalists it was an “amazing day” as her party benefited from a jump in turnout to 65 percent, the highest since the first assembly elections immediately after the 1998 Good Friday peace agreement.

With 37 of the 90 seats returned, Sinn Fein had won 16 and the DUP 10. Counting will not be completed until Saturday.

There’s a distinct possibility that Sinn Fein could become the largest party. There’s also a possibility that there could be a tie,” said Jon Tonge, professor of politics at Liverpool University.

The two largest parties will have three weeks after the election to form a new power-sharing government to avoid devolved power returning to the British parliament at Westminster for the first time in a decade.

But with relations at their lowest point in a decade, Sinn Fein insists among its demands that Foster step aside before it will consider re-entering government. The DUP has rejected this outright, but a Sinn Fein victory might force her to go.

“The prospect of a devolved government being formed, which was already slim anyway, is very remote,” said Tonge. 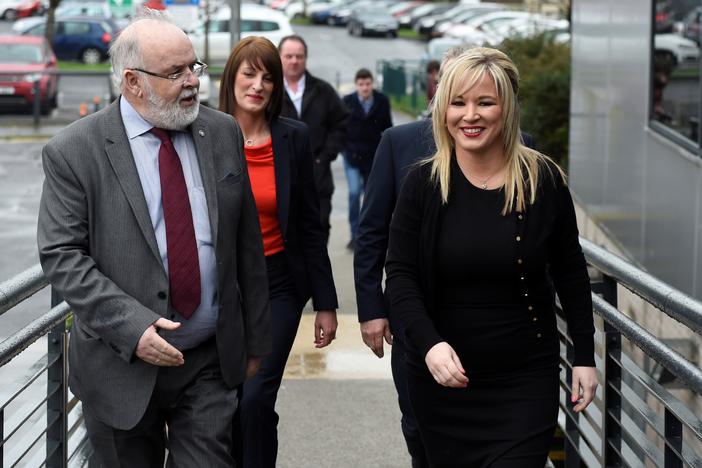 No one predicts the impasse will bring a return to the violence that killed 3,600 people in the three decades before the peace agreement.

But some are warning there could be a deterioration in community relations coupled with government paralysis, as Brexit talks determine the province’s political and economic future.

Sinn Fein President Gerry Adams said he could not guarantee that the return of Northern Ireland’s 1.8 million people to direct rule from London could be avoided.

“That would be a total failure of the politicians of Northern Ireland,” Peter Hain, the last British minister for Northern Ireland to oversee direct rule in 2007, told Sky News.

“To effectively hand power back to London would I think be a disaster for devolution and a serious set back for progress in Northern Ireland.”