British consumers are feeling the strain of rising prices caused by last year’s Brexit vote, suggesting the economy is heading for a slowdown just as London gears up for divorce talks with the European Union, surveys and data showed on Tuesday.

Separate data from market research firm Kantar Worldpanel showed the inflation rate for groceries doubling in the space of a month as prices for food staples including butter, tea and fish all rose.

Britain’s economy unexpectedly lost no pace last year after the surprise referendum vote in June to leave the EU. But Tuesday’s signals add to evidence that growth is now starting to wilt, just as Chancellor Philip Hammond prepares to unveil an annual budget plan on Wednesday.

He has signalled he will not spend heavily now but will keep money in reserve in case the economy needs help to get through a slowdown as Britain withdraws from the EU’s single market — an unsettling prospect for many employers and investors.

“We kept the view that it was pain deferred after the Brexit vote, not pain avoided. Now the data is really starting to come through to support that view,” said Oliver Jones, UK economist at Fathom Consultancy. 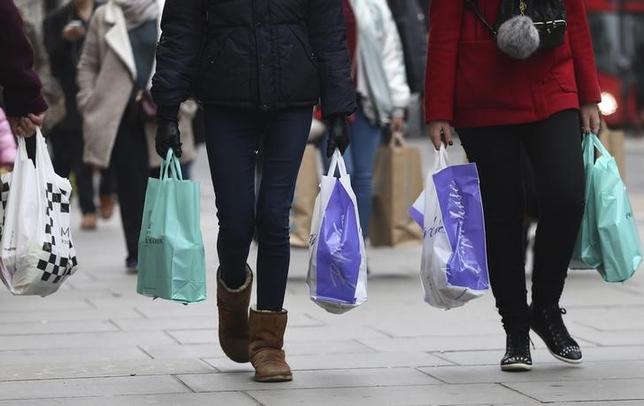 Sterling fell to a seven-week low against the dollar, hit by the weak data and nervousness among investors ahead of a vote in Britain’s upper house of parliament on whether to give Prime Minister Theresa May a green light to start formal Brexit talks.

Thirty out of 33 economists in a Reuters poll published on Tuesday said they were concerned a consumer spending slowdown was under way.

The BRC said there was now an “undeniable” trend of cautious spending among consumers on non-essential items.

Over the three months to February, total non-food sales fell by 0.2 percent, the first fall over a three-month period in more than five years, the BRC said.

Barclaycard reported a similar trend as it said discretionary purchases slowed for a fifth month, with Britons having to spend more on food, fuel and other essentials.

Official consumer price inflation has risen to near the Bank of England’s 2 percent target. Many economists think it will hit 3 percent this year.

The BoE is watching closely to see if households reduce their spending as it weighs up whether the economy needs more monetary stimulus to spur demand or an interest rate hike to curb inflation.

Mortgage lender Halifax also reported signs of a squeeze on consumers as annual house price growth cooled to 5.1 percent in the three months to February, the weakest rise since July 2013.

“A sustained period of house price growth in excess of pay rises has made it increasingly difficult for many to purchase a home,” Halifax housing economist Martin Ellis said.

“This development, together with signs of reduced momentum in the jobs market and squeezed consumer spending power, is expected to curb house price growth during 2017.”

Attackers raid Iran parliament and mausoleum, up to seven dead –...

Qualified foreigners to get Russian citizenship faster under new rules