Twelve of the 24 Ukrainian servicemen captured on Sunday were sentenced to months in custody while another 9 will be jailed for two months, an order Kiev calls “illegal.”

Nine more Ukrainian sailors captured during Sunday’s confrontation with Russia in a strait next to Crimea have been sent to jail for two months by a Russian court.

A total of 24 Ukrainian servicemen, including two security service agents, were arrested on Sunday, when three Ukrainian naval vessels in the Black Sea tried to enter the Kerch Strait to reach the Sea of Azov.

Yesterday, 12 of them were sentenced to months in custody.

Today, nine more were jailed, while pre-trial restrictions for three remaining sailors are not defined as they had been injured during the clash, hospitalised and could not be produced before the court.

Russia and Ukraine have been at loggerheads since 2014, when Russia annexed Crimea after a controversial referendum.

The UN General Assembly viewed the annexation as illegal.

Ukraine has also blamed the Kremlin for separatist violence in eastern Ukraine, near the border with Russia.

Ukraine’s foreign ministry on Wednesday said it had sent Moscow a diplomatic note in protest at the “illegal” detention of 24 of its sailors.

“We repeated a categorical demand to the Russian side to immediately release the captured citizens of Ukraine from custody and ensure their safe return to their homeland,” the statement said.

Meanwhile, Russian President Vladimir Putin accused Ukrainian President Petro Poroshenko of orchestrating a naval “provocation” in the Black Sea at the weekend in order to boost his flagging popularity ratings before an election next year.

The episode has raised fears in the West of a wider conflict between the two countries and Kiev has since introduced martial law in parts of the country, saying it fears a possible Russian invasion.

Russia’s Foreign Minister Sergey Lavrov told reporters in Geneva on Wednesday that the United States should stop encouraging provocative moves by Ukraine and instead mediate between Kiev and rebel-held Ukrainian regions.

Lavrov said Ukrainian warships had ignored maritime law when they tried to enter the Kerch Strait, aiming to create a scandal for domestic political purposes and US encouragement for such acts “saddens me greatly.” 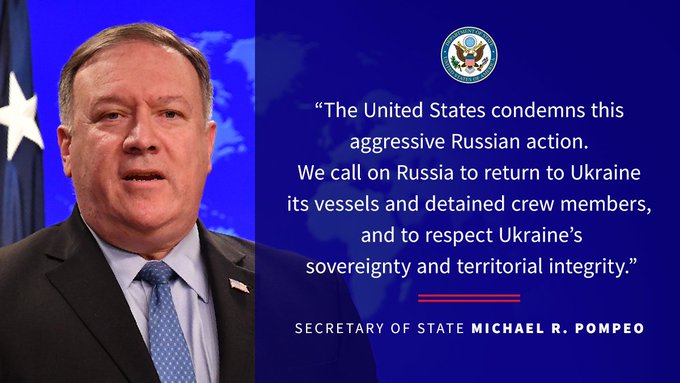 .@SecPompeo: We call on #Russia to return to #Ukraine its vessels and detained crew members, and to respect Ukraine’s sovereignty and territorial integrity. https://go.usa.gov/xP6YG

820 people are talking about this

The European Union’s hawks have called for more sanctions on Russia after a fresh flare-up of tensions with Ukraine, but the divided bloc is not going to act swiftly, if at all, diplomatic sources said.

Several senior European politicians raised the prospect on Tuesday and US President Donald Trump said he might cancel a meeting with Putin later this week over the maritime clash he described as “aggression.”

But the bloc’s top powers Germany and France have so far put emphasis on seeking to calm tensions.

“We are not going to move very quickly on any new sanctions, there could be some later on, that is not ruled out. But for now the unity of the 28 is key. And focus on de-escalation,” one EU diplomat said.

Deployment of S-400 missiles in Crimea?

The RIA Novosti news agency reported it would be in place by the end of the year, joining three other S-400 systems already on the peninsula.

“In the near future, a new anti-aircraft system will take up combat duty to protect the airspace of the Russian Federation,” Colonel Vadim Astafiyev of Russia’s southern military district told news agency Interfax.

He told the news agency the new S-400 system for Crimea had undergone successful testing and was ready to be deployed.