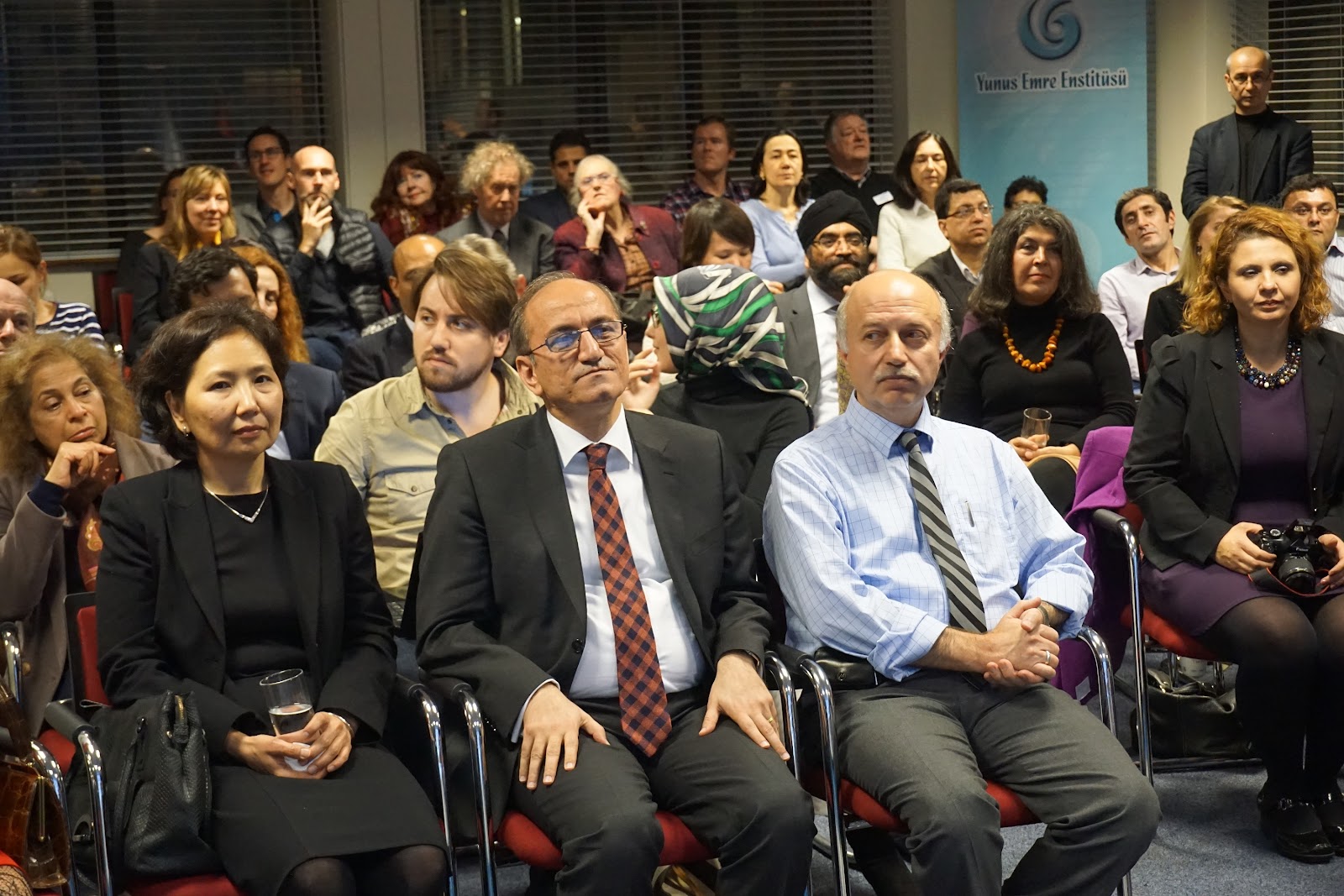 The festival was opened by Turkey’s ambassador to the UK, Abdurrahman Bilgiç; Ambassador of the Kyrgyz Republic, Gulnara Iskakova and Her Highness Princess Katarina of Yugoslavia and Serbia. At the opening ceremony of the festival there was also a performance by the London Uyghur Ensemble.

Additionally representatives of the Embassy of Tajikistan and Kazakhstan and other officials spoke at the festival.

A traditional part of the festival is the annual competition among writers, poets, translators, artists and filmmakers.

The main prize is a grant of $ 20,000, which will be put to the publication of the winner’s book in London, followed by a presentation at the London Book Fair 2017.

On 8th November, 2015, the winners were announced in the categories of “literary work”, “translation”, “illustration” at the ceremony of awarding. 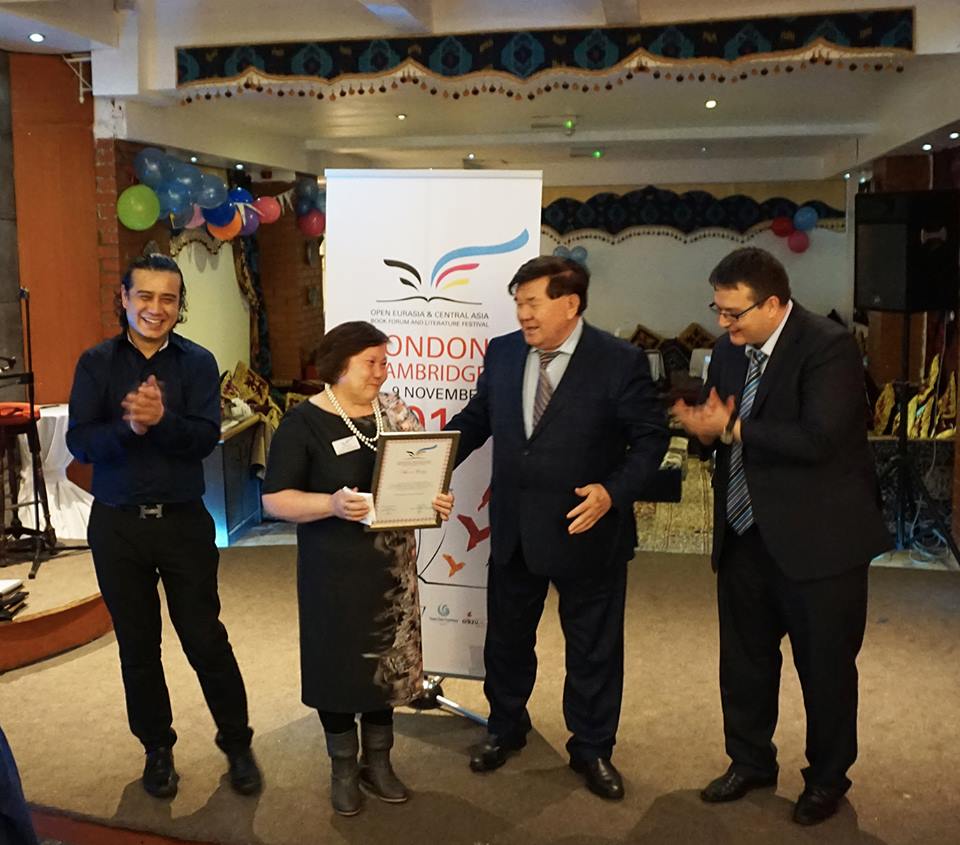 Winners of the competition OECABF-2015 are:

Marziya Zakiryanova Prize for the amount of $ 5,000 for the best women’s work was won by Harlampyeva Natalia (Russia).

The award was presented by: Tamerlan Zakiryanov. 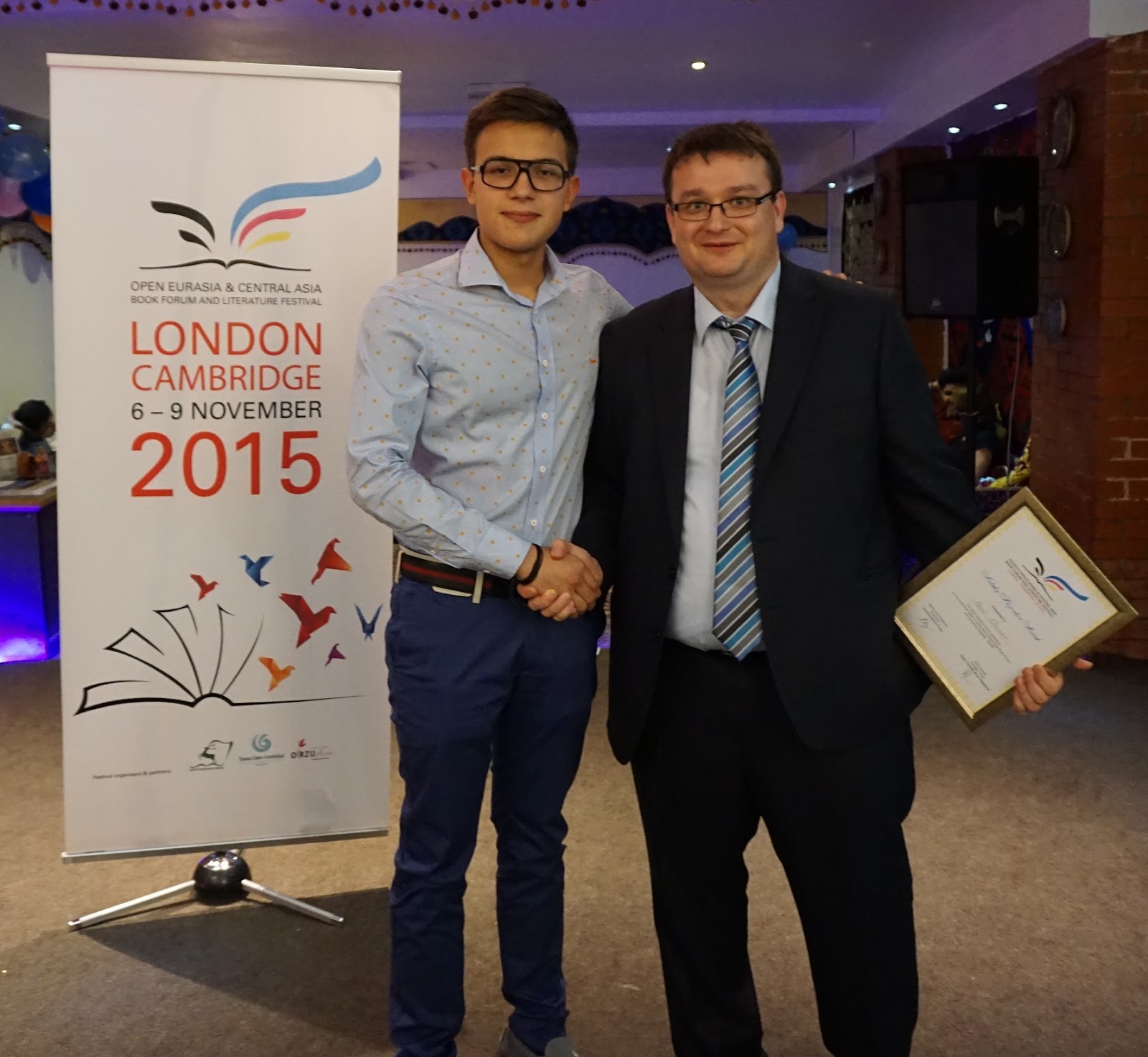 Arkadiy Bezrukov Prize for the amount of $ 1,000 for the best work on the subject of mountains was won by Pavel Shumov (Russia). The prize was handed out by Elena Bezrukova. 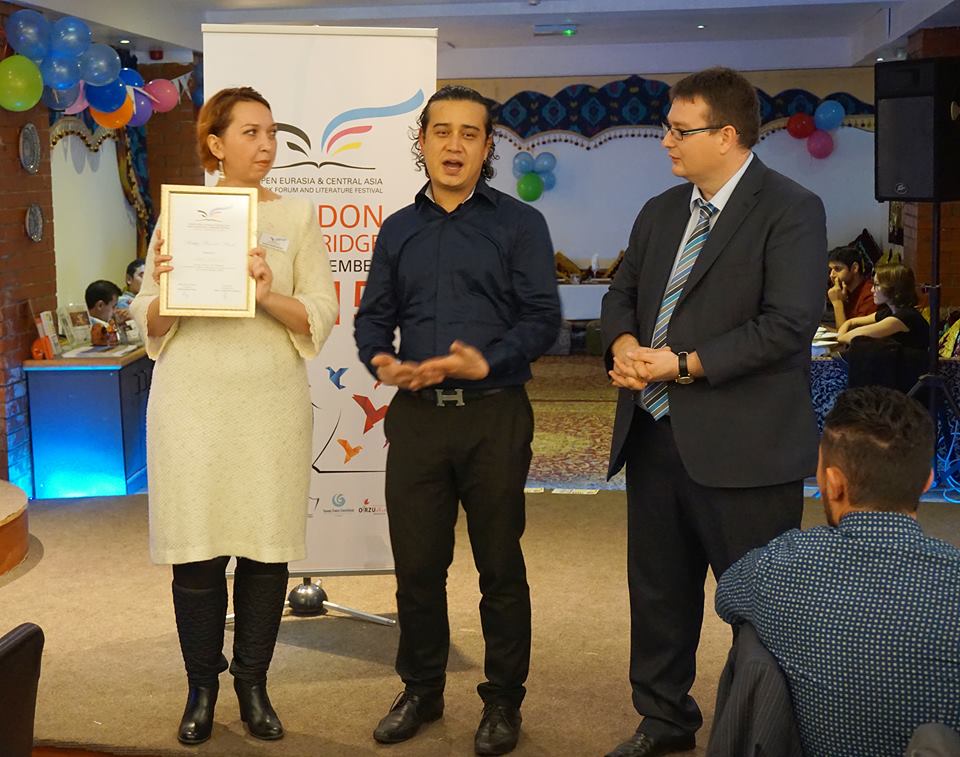 Generals Award from the Association of Generals “Generals of the World are for Peace”. The Association’s highest award, “Dove of Peace” medal for the best work on the topic of strengthening of peace, friendship and mutual understanding between peoples, was awarded to Gulsifat Shahidy (Tajikistan). The prize was handed out by honorary member of the Association, Marat Akhmedjanov. 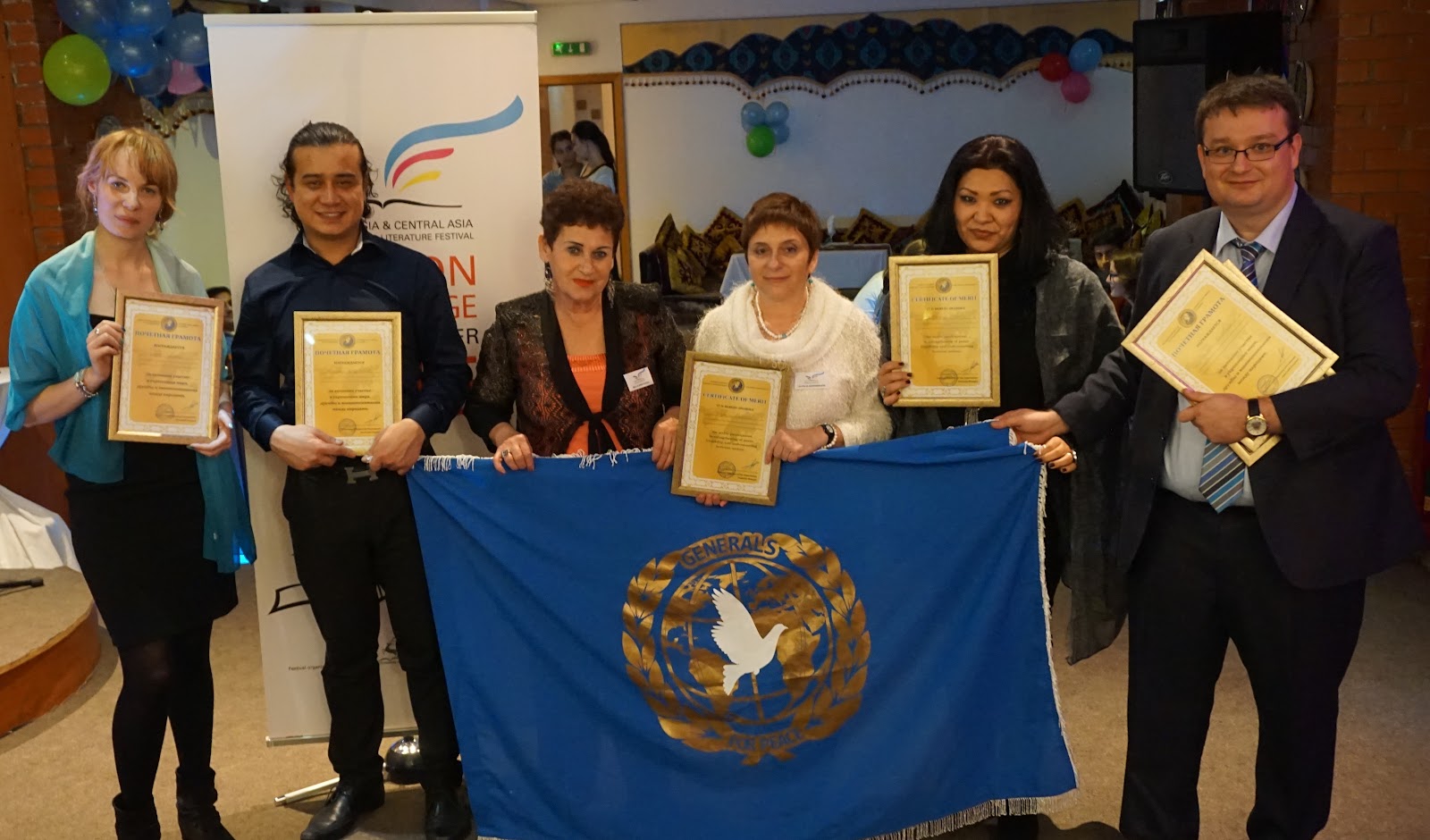 Certificates of Merit from the Association were presented to:

The organizing committee of the festival continued its tradition of awarding the authors who have made a special contribution to the development and promotion of literature in Central Asia. This year the diploma was awarded to the outstanding Kyrgyz fiction writer, poet, Begenas Sartov (1945-1978). The diploma was received by a niece of the writer, Shahsanem Murray.

In 2015, the festival organizers established the following new awards:

– “Breakthrough of the Year”, the diploma went to Kazakh poet, a member of the Writers’ Union and the Kazakh PEN club, Raushan Burkitbayeva-Nukenova.

– “Author of the Year”, the diploma went to the British historian, Robert Toby Wight, author of “Vanished Khans and Empty Steppes”. 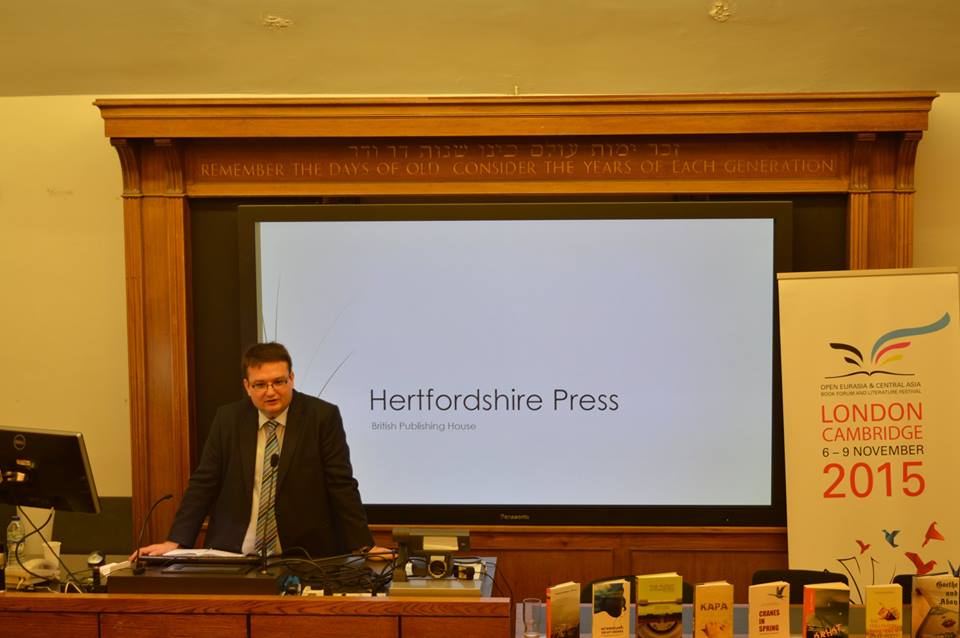 At the heart of the capital, at the University of London (University College London) and the Yunus Emre Institute London Turkish Cultural Centre, there was a presentation of new books by the following authors:

Mukhtar Shakhanov, Chingiz Aitmatov (The Plight of a Postmodern Hunter)

Maxim Korsakov (The Hollywood Conundrum or Guardian of Treasures) 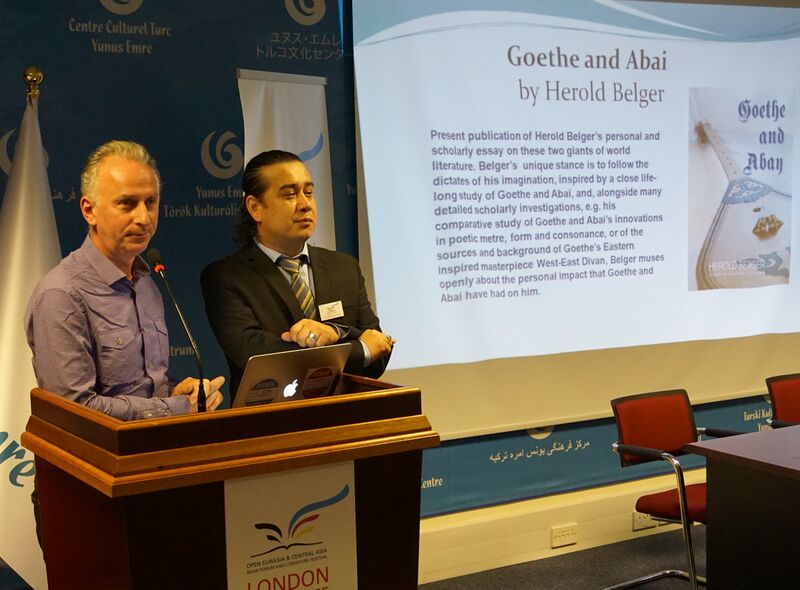 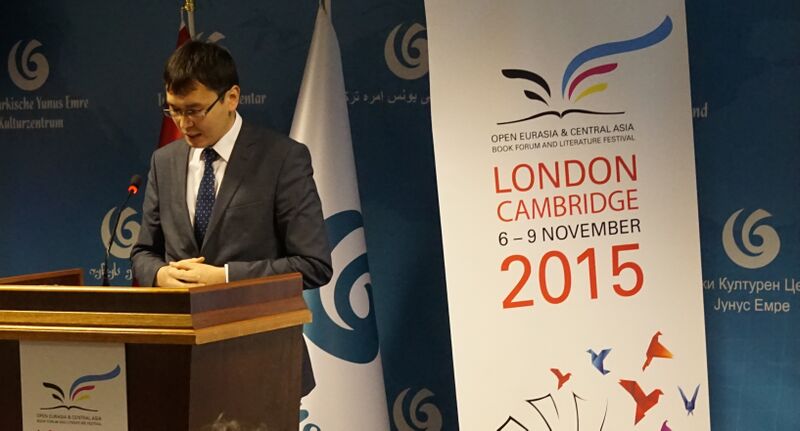 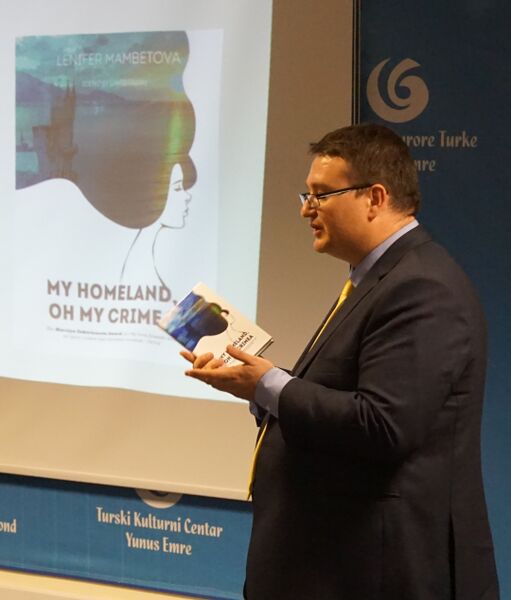 Within the framework of the OECABF-2015 recitals were held in the memory of: 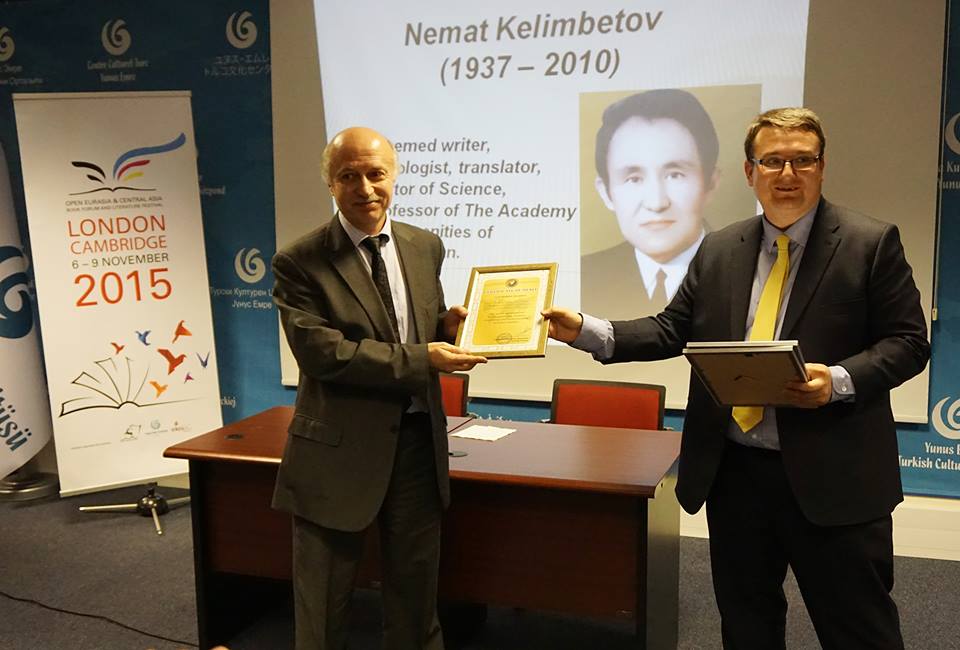 The presentation was made by playwright, poet, and member of the Royal Society of Arts, David William Parry. In the framework of the evening, the Nemat Kelimbetov Prize ceremony was held, awarding prizes to the contestants in the category of “Video Film”:

The winners of OECABF 2015 in the category of video:

Nemat Kelimbetov Prize (the amount of $ 5,000) for the victory in the video category and experimental film “Open Eurasia and Central Asia-2015” was won by Kamal Hasanov (Azerbaijan). The award was handed out by kazakh author Mukhtar Shakhanov.

The presentations were made by Kochi Okada and former Minister of Culture of the Republic of Kyrgyzstan, Sultan Raev. The Representative of the BBC Kyrgyz news service, Gulnara Kasmambetova, also gave a speech. 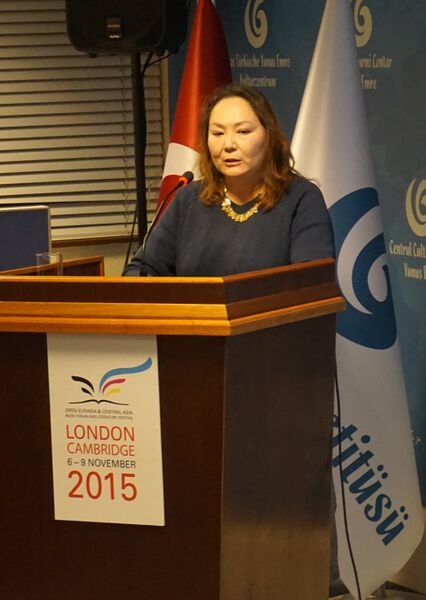 The widow of the writer, Lydia Grigorieva, Rinat Akhmetzyanov and Nurym Taybek spoke at the event. The screening of the film “I am a citizen of Kazan”, dedicated to the poet, novelist, playwright, journalist and translator, Ravil Bukharaev, also took place. 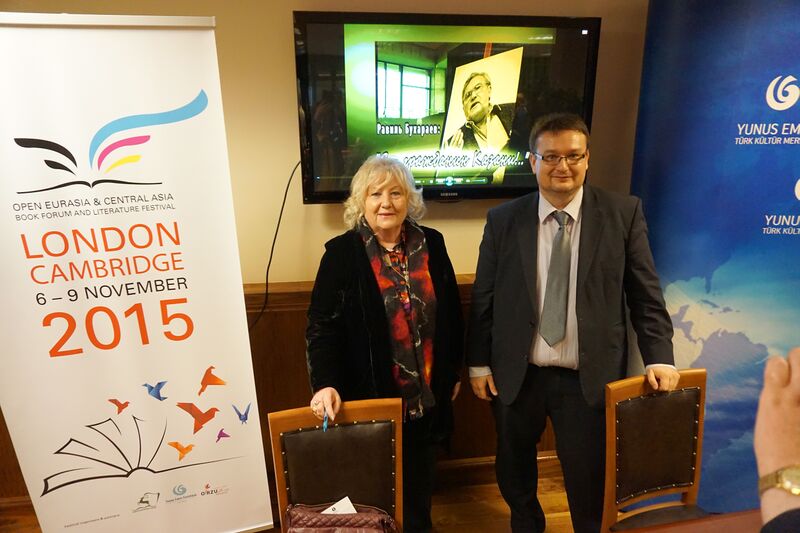 A presentations was made by Melek Maksudoglu. The screening of the film “Cengiz Dagci” shot by Zafer Karatay (2011, TRT- Turkish Radio and TV company). There was also a book launch by the Crimean-Tatar poetess Lenifer Mambetova.

On the 75th anniversary of Kyrgyz fiction writer, Begenas Sartov, a film by Janyl-Mirza Sartova was screened. The film is based on the work “When the Edelweiss Flowers Flourish”. Within the framework of the evening was launched a new book by Shahsanem Murray, called the Cold Shadows.

Within the framework of the forum, round tables and discussion panels were held:

A round table devoted to the Central Asian literature took place at The Cambridge University. The meeting was held with the students of Cambridge University and books by Mukhtar Shakhanov, Sultan Raev and Raushan Burkitbayeva-Nukenova were given to the Cambridge Library. The video of the book “Finding the holy path” by Kyrgyz-British novelist, Shahsanem Murray, was also shown there.

The panel discussion on the topic of “Central Asia through the eyes of Western writers” was held at Yunus Emre Turkish Centre. The moderator of the meeting was author of “Friendly Steppes”, Nick Rowan.

On 9th November, 2015, a roundtable of writers from Central Asia and Russia was held at the headquarters of the broadcasting company, BBC.

About the festival: OECABF-2015 is an annual international open literary festival and forum, which that brings together poets, writers, artists, film directors, actors and creative people of all professions from Central Asia and around the world. The festival and forum has the principle of openness and interaction between all the arts, based on literature, providing an opportunity to establish a dialogue and communication within the literary and cultural space and enabling authors to express themselves.

The aim of “Open Eurasia and Central Asia Book Forum & Literature Festival” is to draw the attention of readers and experts on the past and present achievements of the Eurasian writers; to introduce writers with representatives of publishing houses, their readers, libraries, educational institutions, the media; promote the development of a multilateral dialogue between contemporary writers, poets, critics, editors and publishers.

The first OECABF festival was held on 24 to 25 November 2012 in Bishkek (Kyrgyzstan), gathering 1300 guests and becoming the first event of its kind in the region. The festival was opened by the former president of Kyrgyzstan, Roza Otunbayeva. The winner of the literary contest was Galina Dolgaya (Uzbekistan).

The 2013 festival took place from 5 to 9 November in London and Cambridge, providing an opportunity to the British public to get a better idea of ​​the work of artists from Central Asia. The winner of the literary contest was Zaur Hasanov (Azerbaijan).

The 2014 festival was held from 14 to 17 November in Almaty, Kazakhstan. OECABF 2014 was organized by the publishing house “Hertfordshire Press” in conjunction with the National State Book Chamber of the Republic of Kazakhstan, “Elena Bezrukova Centre”, and supported by the Ministry of Culture of Kazakhstan, Almaty city administration and the Kazakh Academy of Sports and Tourism. The festival held 38 events. It was visited by 2,500 people. More than 65 writers from 10 countries spoke with their reports and presentations. The winner of the literary contest was Tolibshohy Davlyat (Tajikistan).

2016 Festival was proposed to hold in Yakutsk ( Russia)

Since 2002, the publishing house “Hertfordshire Press” (London) has specialized in the publication of modern non-fiction literature by Eurasian authors, as well as re-release of important works of previous years, which, despite their undying relevance, currently unavailable in English.

Photos from OECABF 2015 available at:

Distortion of facts by Islamabad Police in court attack case

Iran vows to close key strait if US cuts off oil...