Police brace for more trouble after Hindu hardliners shut shops and businesses and clashed with police in southern Kerala state for two days in protest against entry of first two women in one of Hinduism’s holiest temples.

A third woman has worshipped at an Indian flashpoint temple in Kerala, police said on Friday, two days after the entry of two others for the first time since a landmark court ruling in September sparked violent protests.

“She entered the temple yesterday night. She is 47 years old and came as a devotee. We were aware and watched the situation,” Balram Kumar Upadhyay, a police official in the southern state, told AFP news agency.

In September, India’s Supreme Court overturned a ban on women of menstruating age –– deemed as those aged 10 to 50 –– setting foot in the gold-plated hilltop temple, but Hindu hardliners until this week prevented any from doing so.

Two days of violent protests by hardliners have seen more than 750 people arrested, police said, as they braced for more trouble after third women entered the temple.

The Sabarimala temple in Kerala state has been at the centre of a prolonged showdown between Hindu traditionalists backed by right-wing ruling party of Bharatiya Janata Party (BJP) and women activists over access to the shrine.

As well as those arrested during the clashes over 600 have been taken into preventive detention, police spokesman VP Pramod Kumar told AFP news agency.

“The police are extra vigilant. There are tensions but it’s peaceful,” he said, adding that police had imposed bans on the movement of people in the towns of Palakkad and Kasargod, two hotspots of violence on Thursday.

Anger erupted on Wednesday after two women in their 40s sneaked into the Sabarimala temple in Kerala state via a side entrance before dawn to worship.

Thousands of Hindu devotees and conservative Hindu groups, many of them female, had previously succeeded in preventing women from accessing the site in the weeks following the landmark ruling, with some hardliners throwing stones at police and assaulting female journalists. 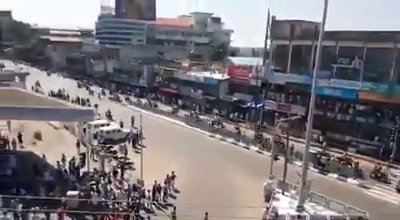 BJP members (Hindu/Sanghi fascists) rode a motorbike convoy into Kerala but locals were waiting for them, and chased them out of town.

Clashes on Wednesday and Thursday between Hindu hardliners, activists of Kerala’s ruling leftist alliance and riot police firing tear gas and water cannon, left one man dead and at least 15 people injured, including four BJP supporters who were stabbed.

Much of the sporadic violence took place as Hindu hardliners sought to force shopkeepers to comply with a dawn-til-dusk shutdown called by the Sabarimala temple hierarchy, media reports said.

The Supreme Court is to start hearing a legal challenge on its temple ruling – the latest in a series of verdicts to upset traditionalists and reflect a more liberal outlook in Indian society – from January 22.

Women are barred from a handful of Hindu temples in India. The entry of women of menstruating age to Sabarimala was taboo for generations and formalised by the Kerala High Court in 1991.

The entry of the two women into the temple came a day after tens of thousands of women, in an initiative backed by the state government, formed a huge human chain called the “Women’s Wall” across Kerala to back the demand access.

Worst job loss in history: 20.2 million private-sector jobs in US...

November 1st declared a day of mourning in Russia