Army operations in India-administered Kashmir were halted on May 16 at the start of the Muslim fasting month, despite a months-long escalation of violence in the Muslim-majority Himalayan region.

India said on Sunday it was resuming military operations against rebels in disputed Kashmir region after a rare 30-day suspension for Ramadan expired.

The announcement comes a day after one person was killed and about two dozen others wounded as protests against Indian rule turned into violent clashes after Indian troops fired tear gas on the demonstrators.

The young man who was killed had suffered pellet injuries in his head and throat while at least nine other men among the injured were hit by pellets in their eyes, medics said.

Army operations in India-administered Kashmir were halted on May 16 at the start of the Muslim fasting month, despite a months-long escalation of violence in the Muslim-majority Himalayan region.

Troops would stop the pursuit of rebels and door-to-door house searches but would still retaliate if attacked, officials said at the time.

“While the security forces have displayed exemplary restraint during this period, the terrorists have continued with their attacks, on civilians and SFs (security forces), resulting in deaths and injuries,” Home Minister Rajnath Singh said on Twitter.

“The security forces are being directed to take all necessary actions as earlier to prevent terrorists from launching attacks and indulging in violence,” Singh added.

It was expected that everyone will cooperate in ensuring the success of this initiative. While the Security Forces have displayed exemplary restraint during this period, the terrorists have continued with their attacks, on civilians and SFs, resulting in deaths and injuries.

The Security Forces are being directed to take all necessary actions as earlier to prevent terrorists from launching attacks and indulging in violence and killings.

“The government of India decides not to extend the suspension of operations” in Jammu and Kashmir state, Singh’s office said in a separate statement on Twitter.

“The operations against terrorists to resume,” it added.

The Government of India decides not to extend the suspension of operations in J&K announced in the beginning of Ramazan.

The government’s suspension had failed to halt the mounting death toll in India-administered Kashmir, which is also claimed by Pakistan.

Several clashes between rebels and Indian troops were reported in the initial days that followed the ceasefire announcement in which a number of suspected rebels and at least five soldiers or police were also killed.

A youth also died after being hit by a paramilitary vehicle during a demonstration in Srinagar. 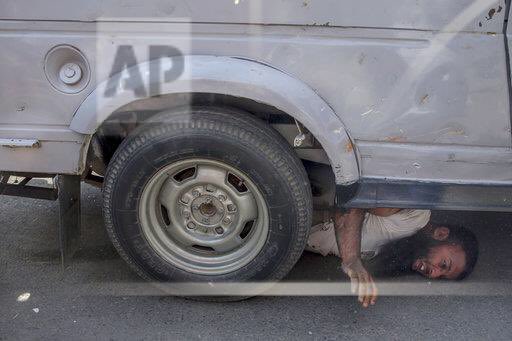 A Kashmiri man shouts for help as an Indian paramilitary vehicle runs over him during a protest in Jamia Masjid, Srinagar, June 1, 2018. Three people were injured, one of them seriously, after they were hit and run over by the vehicle. (AP Photo/Dar Yasin) #kashmir

A video of the incident that allegedly showed the armoured vehicle hitting protesters was been widely shared on social media.

It also shows scores of protesters throwing rocks at a lone vehicle as it races towards a crowd. Other images show two youths under the vehicle, one crying for help.

It was unclear whether the victims were protesters or bystanders.

Officials said the driver has been charged with dangerous driving, while two other youths hit by the vehicle were still being treated.

Authorities cut mobile internet services and put reinforced patrols on the streets as the funeral for the slain youth was held, while rebel groups opposed to Indian rule called for a general strike.

Last month in May, another protester was killed by a police armoured vehicle in Srinagar. Police initially denied involvement in the death until a video – shot on a mobile phone – showed the vehicle hitting the man.

Prime Minister Narendra Modi held a cabinet meeting on Thursday to discuss whether to extend the initiative, amid a heated debate on the move. It was the first time in almost two decades that Indian authorities had suspended military operations against rebels.

The killing of the abducted soldier, who authorities believe was the work on rebel groups, and the shooting last week of a leading Kashmir editor, Shujaat Bukhari, put pressure on the government to resume operations.

No group of individual claimed responsibility for both the killings and Indian forces as well as rebel groups have accused each other of being behind the attacks.

The home minister said the suspension had been ordered “in the interests of the peace-loving people” of Kashmir “to provide them a conductive atmosphere to observe Ramadan”.

The editor’s murder took place on the same as the UN human rights chief Zeid Ra’ad Al Hussein had called for a major investigation into abuses in Kashmir, as his office released its first-ever report on violations committed by both India and Pakistan in the disputed territory.

The UN report, which is particularly critical of India, highlights “chronic impunity for violations committed by security forces”.

India’s foreign ministry rejected the report, blasting it as “fallacious” and “tendentious”.

However Islamabad welcomed Zeid’s request for a probe, saying in a statement that it was “consistent with Pakistan’s several calls to this effect since 2016”.

Zeid said India needed “to take immediate and effective steps to avoid a repetition of the numerous examples of excessive use of force by security forces in Kashmir.”

The rights office raised particular concern over the Armed Forces Special Powers Act, in place in India-administered Kashmir since 1990, which prevents soldiers from facing prosecution without the consent of the central government.

The act has amounted to “virtual immunity” for troops in Kashmir, the UN said, noting that the government has not approved a single case against an armed forces member.

Zeid also called on India to ward off any further escalation in Srinagar, the capital of India-administered Kashmir.

Violence in Kashmir has escalated since troops killed a top rebel commander Burhan Wani in 2016. Last year was the deadliest in the region for the past decade.

Dozens of young men have since joined rebel groups and there are now almost-daily gunfights between armed rebels and Indian soldiers.

Zeid said he met with representatives of both governments following the upsurge of violence in July 2016.

Concerned by what the UN termed “large and unprecedented” protests after Wani’s death, Zeid asked for “unconditional access” to Kashmir, but neither government agreed.

His office then began remote monitoring of the region, producing a report covering alleged abuses between January 2016 and April of this year.

Turning to territory under Pakistan’s control, the report identified “a range of human rights abuses,” but noted they “are of a different calibre or magnitude and of a more structural nature.”

The rights office criticised restrictions on freedom of expression and assembly that made it difficult to obtain information about conditions in Pakistan-administered Kashmir.

Pakistan should “end the misuse of anti-terror legislation to persecute those engaging in peaceful political and civil activities and those who express dissent,” the report said.

It cited claims from a local civil society group that hundreds of people have been detained under the anti-terrorism act and said the act has been used to target those who raise questions about basic rights.

Pakistan has however warned against creating “a false sense of equivalence” between its conduct in Kashmir and that of India’s.

Pakistan-administered Kashmir, enjoys some sort of self-rule with its own government, parliament and flag.

Kashmir has been divided between India and Pakistan since the end of British rule in 1947 and the two nations have fought two wars over the territory.

India has about 500,000 soldiers in the part of Kashmir it administers, where scores of armed groups are fighting for independence or a merger with Pakistan. Hundreds of thousands, mainly Muslim civilians, have been killed in the violence since 1989.

India holds about 45 percent of Kashmir and Pakistan more than a third. China controls the remainder.

India accuses Pakistan of arming the rebels but Islamabad says it only gives diplomatic and moral support to the Kashmiri.

Pakistan has long demanded for the implementation of a UN-mandated plebiscite to allow the people of Kashmir to determine their own future.

Ebola medal for over 3000 heroes