Britain’s pound fell on Monday as concern rose that the country is heading for a “hard” Brexit from the European Union and its single market, a day before a speech by Prime Minister Theresa May on the government’s plans.

Some British newspapers have billed May’s speech on Tuesday as a shift away from preferential EU single market access – in order to win restrictions on immigration – and a toughening of the UK’s stance towards an economic bloc that accounts for roughly half its exports and imports.

A spokeswoman for May, who will also attend a gathering of the world’s economic elite in Davos, Switzerland, this week, called the reports about the tone of her upcoming speech “speculation”.

That remark helped steady sterling in London trading but could not repair all the damage. The pound at one point had dropped below $1.20 to a three-decade low, barring its “flash crash” in October, and as much as 2.5 percent against the Japanese yen. GBPJPY= [/FRX]

“It’s clear that sterling is still very vulnerable to ‘hard’ Brexit fears,” said Rabobank currency strategist Jane Foley. “The uncertainty is itself also a negative factor, and I think perhaps that’s one of the reasons for Theresa May’s speech on Tuesday, to provide a little bit of clarification.”

With May expected to trigger Article 50 by the end of March, which will start formal EU separation proceedings, the battle lines are already being drawn.

British finance minister Phillip Hammond also gave a thinly veiled warning in a German newspaper interview at the weekend that the UK could use corporate tax as a form of leverage in Brexit negotiations.

“If we have no access to the European market, if we are closed off, if Britain were to leave the European Union without an agreement on market access, then we could suffer from economic damage at least in the short term,” he said. “In this case, we could be forced to change our economic model.”

However, he added that Britain did not want to close its doors completely to EU citizens who wanted to work in the UK. 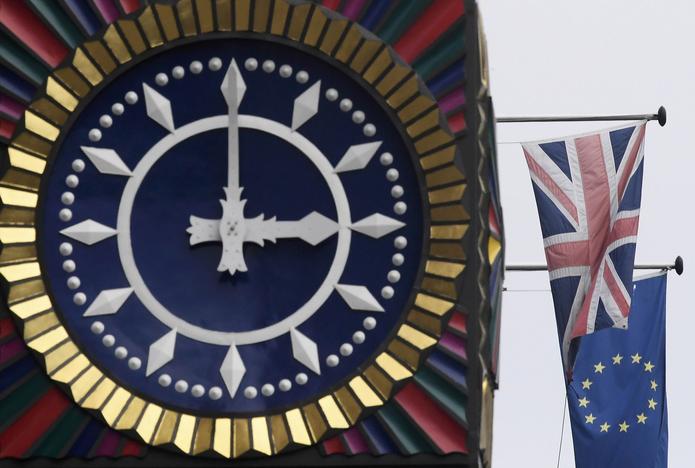 May’s spokeswoman said on Monday her boss shared Hammond’s view on Britain’s tax framework. She added, though, that she did not recognise comments from Sunday Times sources that May’s office was expecting a “market correction” after her speech.

The International Monetary Fund pushed up its UK growth forecast again on Monday, providing the latest sign that Brexit jitters have yet to hit the real economy.

Later on Monday, Bank of England Governor Mark Carney, who has delivered a string of warnings about the potential impact, will give a speech at the London School of Economics on the policy issues affecting the bank.

The central bank cut British interest rates to a record low and pumped fresh stimulus into the economy shortly after the Brexit referendum vote on June 23, but it is now seeing inflation accelerate as a result of sterling’s slide.

The pound has fallen almost 20 percent against the dollar GBP=D4 and nearly 14 percent against the euro GBPEUR= since the vote. By 1630 GMT on Monday, it was down almost 1 percent at $1.2055 and 0.6 percent at 87.90 pence per euro, while demand to hedge volatility was at its highest since July. GBPSWO= GBPONO=

London’s stock market .FTSE continued to benefit, however: the FTSE ended a 14-day winning streak, but was the only major European index not to close deep in negative territory. It has surged 25 percent since Brexit, partly because the pound’s slump helps internationally-spread firms that earn in dollars and euros.

May has so far given very little away about what deal she will be seeking, frustrating some investors, businesses and MPs.

Tuesday’s speech will stress the need for Britons, who voted for Brexit by 52 to 48 percent in the referendum, to unite around common goals such as protecting and enhancing workers’ rights, her Downing Street office said in a statement.

“Now we need to put an end to the division and the language associated with it – ‘Leaver’ and ‘Remainer’ and all the accompanying insults – and unite to make a success of Brexit and build a truly global Britain,” May is expected to say.

Russia calls for int’l conference on Syrian refugees in Damascus

Cameron: ‘No prospect of Turkey joining the EU in decades’

Athens says Turkish putschists could be tried in Greece

Russia calls for int’l conference on Syrian refugees in Damascus

US hits Chinese officials with sanctions over Hong Kong