Nico Rosberg led from start to finish to win while Lewis Hamilton and Sebastian Vettel failed to finish the Australian Grand Prix in Melbourne.

Mercedes star Rosberg got a perfect start to claim the lead from team-mate and pole-sitter Hamilton, and never looked troubled thereafter.

Red Bull’s Daniel Ricciardo originally claimed what seemed an impressive second place in front of his home crowd, but was later stripped of his accolade as a subsequent investigation showed that his car had consistent exceeded the maximum allowable fuel flow rate allowed under 2014 rules.

That left McLaren’s Kevin Magnussen, originally third, with a stunning second place on his F1 debut, with Jenson Button close behind in third.

The shocks of the race were the early retirements of Hamilton and Vettel, however, both of whom suffered misfiring cylinders that saw them missing pace from the start.

Fernando Alonso was promoted to fourth after Ricciardo fell foul of stewards, but perhaps the performance of the day came from Vallteri Bottas, who came fifth after twice scything through almost the entire field – once at the start of the race, and then again after hitting a wall, losing his right rear tyre and limping into the pits. 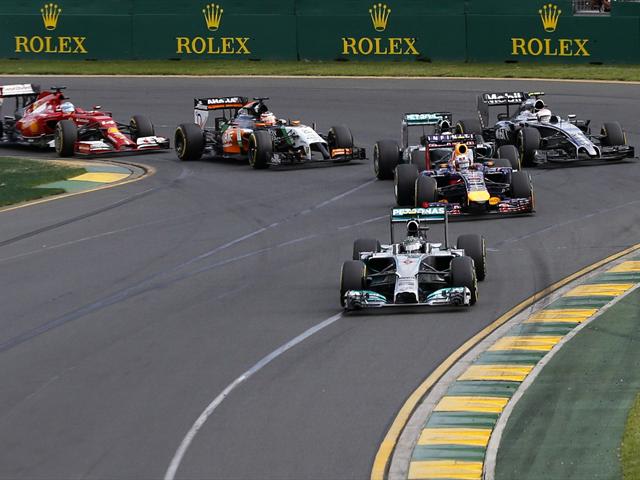 The winner’s joy was evident after as easy a win as could be imagined.

“Fantastic! What a car you’ve given me! What a car!” Rosberg yelled down the radio to his team after taking the chequered flag.

“It’s great to have such an amazing silver arrow to drive,” Rosberg added on the podium. “This thing was just unbelievably quick and the reliability was great as well.”

Ricciardo had been delighted after making the podium in his home race.

“Two or three weeks ago I’d have bet everything I owned that we wouldn’t be standing here now,” said the Aussie. “It’s been an incredible turnaround – I don’t know how Red Bull have done it, but they have.”

Clearly the answer to that question is, at least in part, that Red Bull must have cut one too many corners to produce an incredible turnaround between testing and the opening race.

Magnussen was thrilled with his display: “The car was just so much better than it has been,” he said. “Big congratulations to the team for a great job.”

Hamilton had a very different opening race, however, though he remained philosophical.

“I was driving on five cylinders – it’s a bit unfortunate, but that’s racing,” he said.

“It’s just a hiccup. There’s a long way to go… I’m not concerned about anything.”

Vettel tried to stay cool despite his clear frustration at the retirement after a rotten weekend that saw him qualify down in 13th.

“We lost power. We didn’t understand why – cars kept passing me… At one stage I thought there was a slight improvement but then it was clear there was a big problem with the engine,” he said.

Hamilton and Vettel both added that they are confident the issues could be solved quickly – and given the excellent pace of their team-mates, that seems more than likely.

Rosberg, tipped to duel with team mate Hamilton for the championship, celebrated his fourth race victory and first since last year’s British Grand Prix, when he was also the beneficiary of technical mishaps to Hamilton and Vettel.

The glitches continued as only 14 of the 22 cars finished on a gusty day at the bumpy street circuit which was doused by a brief rain-shower early in the race.

Hamilton, who snatched pole position at the end of a wet qualifying session on Saturday, noticeably lacked power on his start and was called in by his team to retire on the third lap.

Vettel, starting twelfth after a grid penalty for one of the cars just ahead of him, also struggled at the start and retired only a few laps after Hamilton, complaining of engine performance problems.

That snapped a nine-race winning streak for the German dating back to the Belgian Grand Prix in August.

Ricciardo thrilled home fans by seemingly taking his maiden podium spot in his first race weekend with Red Bull and drove with admirable composure after being challenged by Magnussen over the closing laps.

Magnussen’s podium, the first by a Dane in Formula One and the team’s first since 2012, was intially thought to be an exact match of Hamilton’s first F1 race for McLaren in 2007 when the Briton qualified fourth and finished third. In the end, Magnussen went one better by earning second place.

Williams driver Bottas’s fifth place was his best F1 result ever, and an outstanding race from 15th on the grid. His points haul was more than his team scored in all of last season.

The race began farcically, with Marussia driver Max Chilton stalling on the grid before the pre-start installation lap and his team mate Jules Bianchi then repeating the mishap, forcing a second formation lap.

Both Marussias started from pit-lane behind Lotus’s Romain Grosjean, who was also dealt a drive-through penalty for leaving his garage prior to the 15-minute signal before the race.

Japan’s Kamui Kobayashi lived up to his reputation as a combustible racer by ploughing into the back of Felipe Massa’s Williams at the start, taking both drivers out of the race at the first corner and prompting an FIA investigation.

Armenians converted ‘Aghdam Jamia Mosque’ into Pigsty in Occupied Qarabakh – why no Protests?

Hamilton and Rosberg racing for their futures at Mercedes

UK cyclone: stay off roads in the storm, drivers told

Drug-smuggling doorman jailed after going on the run