CAIRO — An Egyptian court on Saturday sentenced six people, including two Al-Jazeera employees, to death for allegedly passing documents related to national security to Qatar and the Doha-based TV network during the rule of Islamist President Mohammed Morsi.

Morsi was ousted by the military in July 2013 and has already been sentenced to death in another case. That death sentence and another two — life and 20 years in prison — are under appeal. His Muslim Brotherhood group was banned and declared a terrorist organization after his ouster.

All of Saturday’s verdicts can be appealed.

The two Al-Jazeera employees — identified by the judge as news producer Alaa Omar Mohammed and news editor Ibrahim Mohammed Hilal — were sentenced to death in absentia along with Asmaa al-Khateib, who worked for Rasd, a media network widely suspected of links to Morsi’s Muslim Brotherhood.

There was no immediate comment from Al-Jazeera on Saturday’s verdicts, but a news story on the Al-Jazeera English website identified Hilal as a former director of news at Al-Jazeera’s Arabic channel and said Alaa Omar Mohammed was an Al-Jazeera employee until last year.

Judge Mohammed Shirin Fahmy recommended the death sentence for the six last month. Under standard procedure in cases of capital punishment, his recommendation went to the office of Egypt’s Grand Mufti, the nation’s top Muslim theological authority, for endorsement. 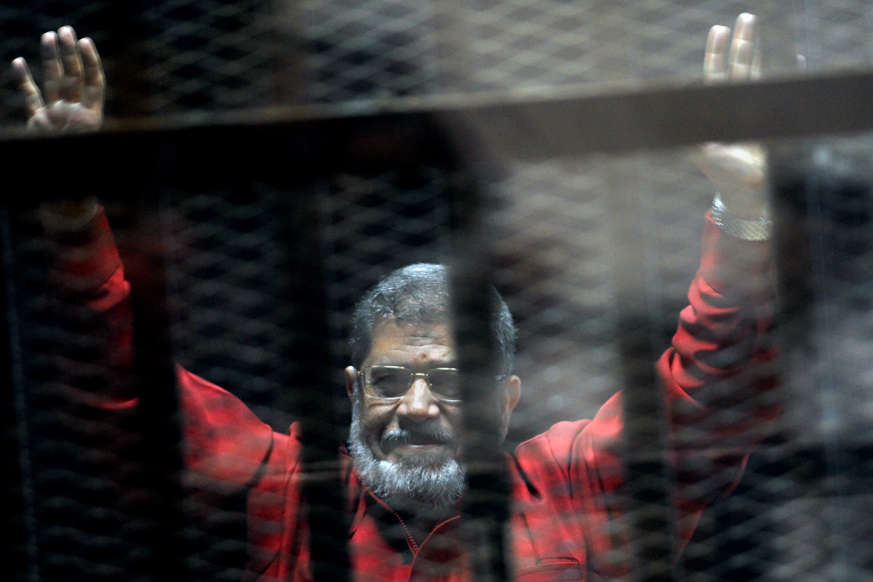 © (AP Photo/Ahmed Omar, File) FILE – In this June 21, 2015 file photo, former Egyptian President Mohammed Morsi, wearing a red jumpsuit that designates he has been sentenced to death, raises his…Fahmy quoted the Mufti’s office as saying the six had sought to harm the country when they passed to a foreign nation details of the army’s deployment as well as reports prepared by intelligence agencies.

“They are more dangerous than spies, because spies are usually foreigners, but these are, regrettably, Egyptians who betrayed the trust.”

“No ideology can ever justify the betrayal of one’s country,” the judge added.

Egypt’s relations with Qatar have been fraught with tension since the ouster of Morsi, who enjoyed the support of the tiny but wealthy Gulf state. Cairo also maintains that Al-Jazeera’s news coverage of Egypt and elsewhere in the Middle East is biased in favor of militant Islamic groups.

Last year, President Abdel-Fattah el-Sissi pardoned two imprisoned journalists from the Al-Jazeera English news network. Mohamed Fahmy, an Egyptian-born Canadian, and Egyptian Baher Mohamed were arrested in December 2013. They had been sentenced to three years in prison for airing what a court described as “false news” and coverage biased in favor of the Muslim Brotherhood.

The prosecution of the two, along with Australian Peter Greste — another Al-Jazeera English reporter who was deported in February last year — drew strong international condemnation.

Their long-running trial was entangled from the start with the wider political enmity between Egypt and Qatar following Morsi’s ouster.

David Cameron: ‘I am very proud of the diversity and strength...

China and Turkey agree to boost cooperation on infrastructure

Turkish-Russian rapprochement, and US plans in Syria