The protests began in response to the death of 46-year-old African American male George Floyd in Minneapolis, Minnesota, in police custody on Monday.

The unarmed man died after Derek Chauvin, a white police officer, held him down with a knee on his neck though he repeatedly pleaded “I can’t breathe.”

Chauvin was arrested and charged with three-degree murder and manslaughter earlier on Friday.

However, unrest has swept the United States as protesters say they want to see charges for all four police officers involved in the death of Floyd. 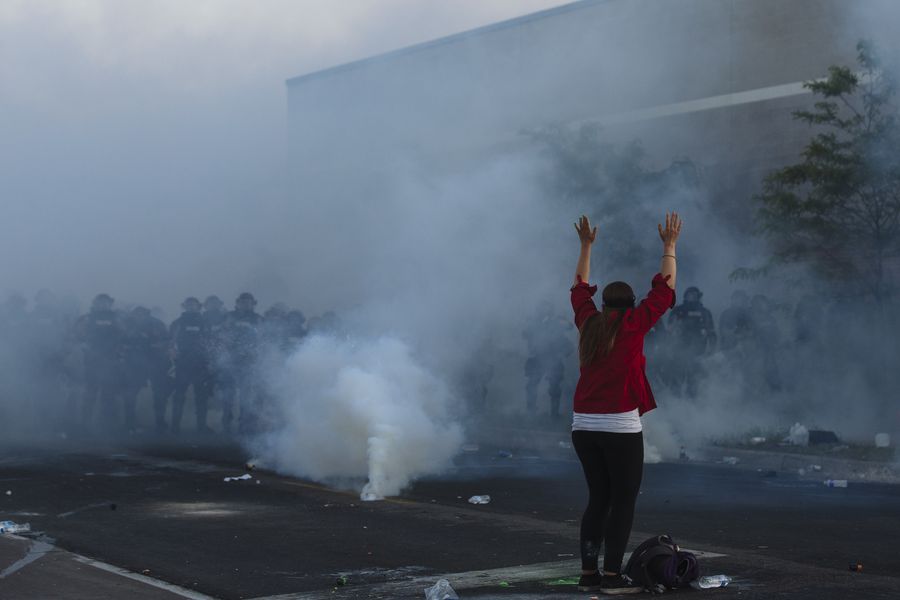 A woman raises her arms as riot police fire tear gas during a protest outside the 5th Police Precinct in Minneapolis, the United States, on May 30, 2020. Minnesota Governor Tim Walz on Saturday activated “full mobilization” of the Minnesota National Guard after four straight nights of violent protests in the midwest state’s biggest city Minneapolis over the death of George Floyd, an unarmed black man, in police custody. (Photo by Angus Alexander/Xinhua)

A tanker truck driver was in custody after speeding through marchers protesting Floyd’s death on the Interstate 35W Bridge in Minneapolis late in the day, according to the Minnesota Department of Public Safety.

The freeway was among many shut down in the Minneapolis area for the second night in a row as an 8 p.m. curfew was imposed at the nation’s center of protests for days.

Washington, D.C. Mayor Muriel Bowser said on Sunday night she was imposing a citywide curfew amid rising tensions between protesters and police outside the White House.

Sunday marked the third day in a row of protests in the U.S. capital over the death of Floyd. On Friday night, U.S. President Donald Trump was briefly taken to the underground bunker used in the past during terrorist attacks, according to local media report. 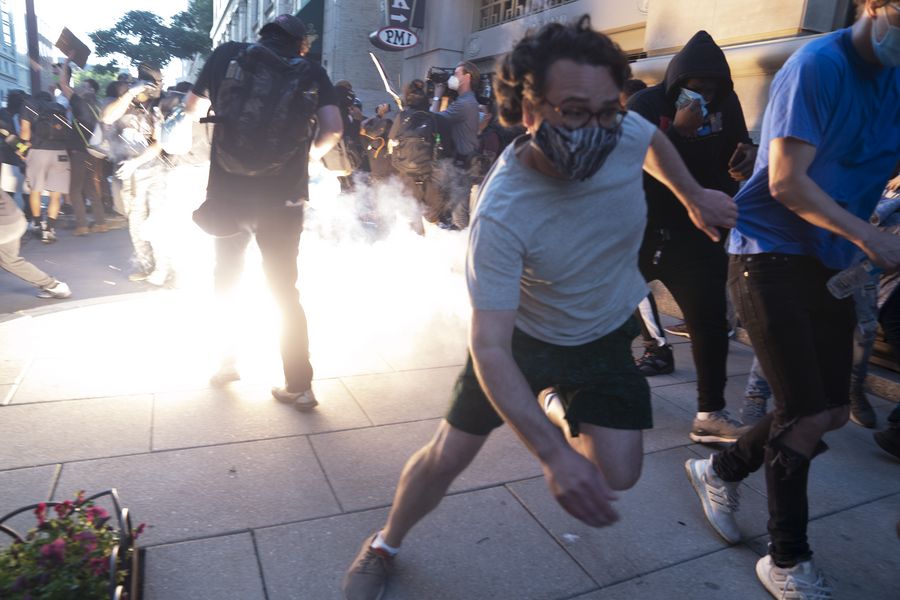 By Sunday night, thousands of demonstrators were fanning across New York City in different groups, walking into streets which were crowded with traffic.

Some of the groups paused every few blocks to take a knee, while others gathered in Times Square in Manhattan and outside the Barclays Center arena in Brooklyn.

A viral video that captured one of the tensest moments of Saturday’s protests in the Big Apple showed that police officers in a Sport Utility Vehicle suddenly surged forward into a crowd of protesters. 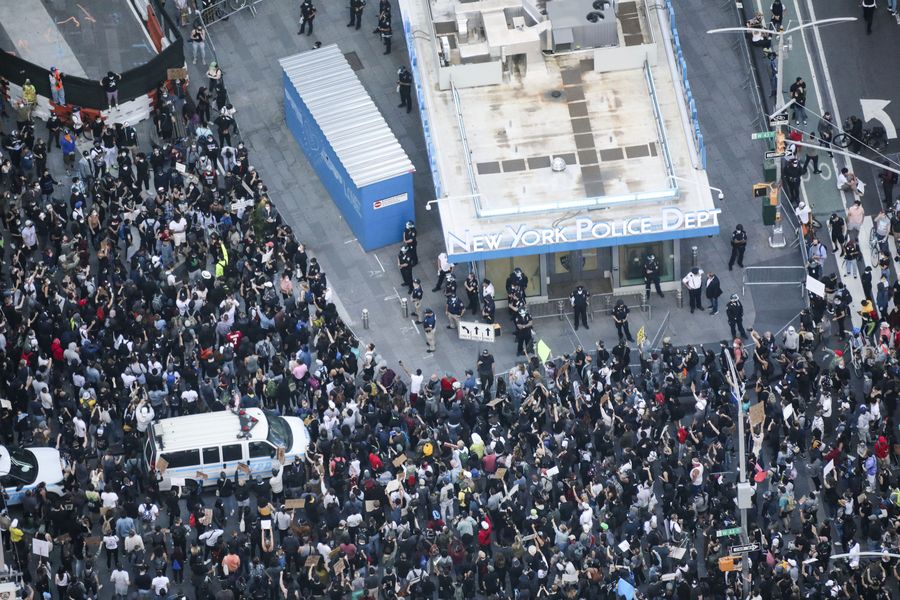 Demonstrators protest against police brutality on Times Square in Manhattan of New York, the United States, May 31, 2020. New Yorkers continued to protest over the death of George Floyd as thousands of people took to the street all over the city on Sunday to express their anger toward police brutality and racism. (Xinhua/Wang Ying)

Other cities in Southern California, including Santa Ana, Culver City and West Hollywood, which joined Los Angeles in proclaiming an overnight curfew on Saturday, also extended the curfew to local time 5:30 a.m. Monday.

California governor Gavin Newsom declared a state of emergency in Los Angeles County on Saturday night to cope with the unrest. With a population of more than 10 million, the county is the most populous county in the United States.

Chicago Mayor Lori Lightfoot on Sunday once again set strict parameters for the city effort to contain another night of protesting.

Bridges on the Chicago river dividing the residential areas north of the city’s downtown Loop area remained up on Sunday, closing off any movement between the two sides. The city’s public transit system suspended all bus and rail services starting at 6:30 p.m. 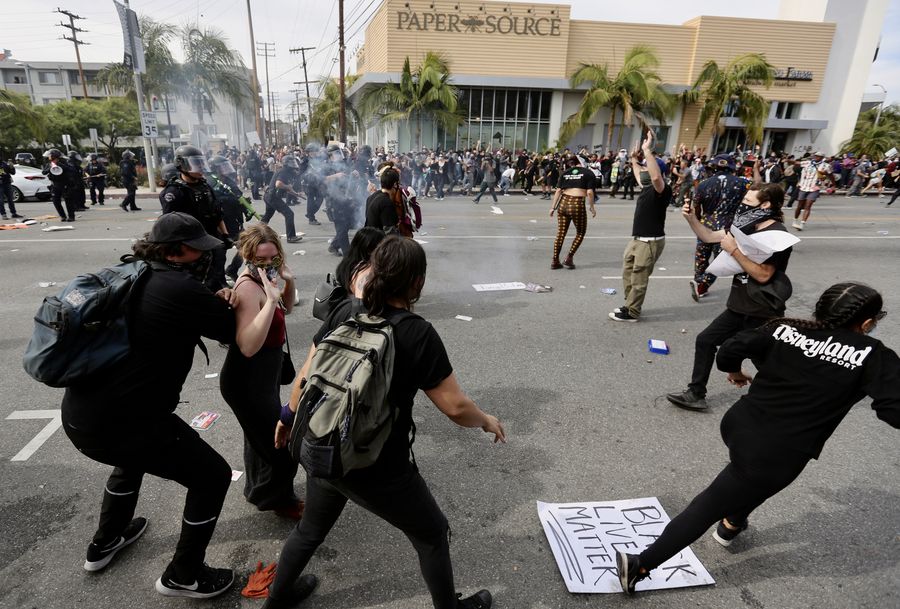 Protesters confront the police during a massive street protest over the killing of George Floyd in Los Angeles, the United States, May 30, 2020. Over 530 people were arrested Friday night and early Saturday after protests against police brutality turned violent in downtown Los Angeles, authorities said Saturday noon. Los Angeles Mayor Eric Garcetti announced at a press conference Saturday afternoon that a curfew will be in effect in the city’s downtown beginning from 8 p.m. Saturday to 5:30 a.m. Sunday local time. (Xinhua)

Illinois Governor J.B. Pritzker would activate 375 Illinois National Guard soldiers to help manage street closures at the request of Lightfoot. The Guard will not interfere with peaceful protestors, Pritzker said.

Chicago’s precautions followed a chaotic and violent Saturday evening, when many businesses along the streets were looted, police cars overturned and some properties damaged. There were six shootings with one death, and police made 240 arrests.

Texas Governor Greg Abbott on Sunday declared a state of disaster following violent protests in cities throughout the state. The move allowed Abbott to designate federal law enforcement officers to respond to the ongoing threats.

Abbott also has ordered thousands of more troopers to these cities and more than 1,000 National Guard soldiers to assist the Department of Public Safety and local law enforcement in their efforts. 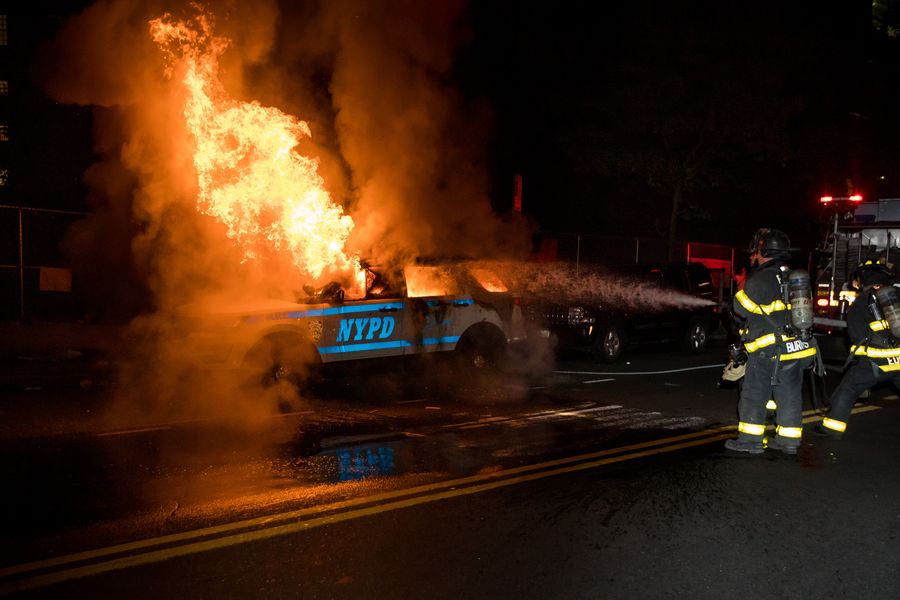 Firefighters put out a fire on a SUV of New York police department during a protest over the death of George Floyd in the Brooklyn borough of New York, the United States, May 30, 2020. New York officials on Saturday denounced acts of violence in the city’s protests over George Floyd’s death, after about 300 protesters were arrested in days. Mayor Bill de Blasio said at a briefing that some protesters “came with an agenda of violence and incitement,” and the city does not allow it to happen. (Photo by Michael Nagle/Xinhua)

Over the weekend, protests and violence throughout Texas continued as hundreds of protestors were arrested in the past two days.

In Dallas, Police Chief Renee Hall on Sunday instituted a curfew from 7 p.m. Sunday (0100 GMT Monday) till 6 a.m. for the next several days in response to the weekend violent protest.

In the state capital of Austin, protesters gathered in downtown area Sunday afternoon and marched toward the state Capitol and Austin City Hall, chanting “no justice, no peace,” according to local media. ■