President Donald Trump on Tuesday endorsed Republican legislation to replace the Obamacare healthcare law but the measure faced a rebellion by conservative groups and lawmakers, complicating its chances for passage in the U.S. Congress.

Republican U.S. House of Representatives leaders on Monday unveiled legislation to do away with Obamacare, eliminating the requirement that most Americans obtain medical insurance and creating a system of tax credits to coax people to purchase private insurance on the open market.

Speaker Paul Ryan said he could guarantee that he had enough votes to win passage of the measure in the House, adding that conservatives should be excited about the plan to repeal and replace Democratic former President Barack Obama’s signature domestic policy achievement.

But conservatives slammed the proposal, with Republican Senator Mike Lee calling it “exactly the type of back-room dealing and rushed process that we criticized Democrats for.”

Trump said the plan was open to negotiation, but said it had already earned support “from everybody.” Vice President Mike Pence described it as a “framework,” signaling the measure was far from its final form. Health and Human Services Secretary Tom Price called it “a work in progress.”

The proposal represented a key step toward carrying out pledges by Trump and congressional Republicans to dismantle Obamacare.

But lawmakers face pressure from constituents not to throw America’s healthcare system into chaos. Democrats denounced the proposal as taking away health insurance from millions of Americans and benefiting the rich.

Some conservative Republicans complained the bill did not go far enough in removing government from the healthcare industry.

In the Senate, where Republicans can afford to lose only two votes from their razor-thin majority, Republican Senator Rand Paul called the plan “Obamacare Lite” and said he wanted a repeal-only option.

Trump, in an evening Twitter message, said he was “sure” Paul would “come along with the new and great healthcare program because he knows Obamacare is a disaster!” 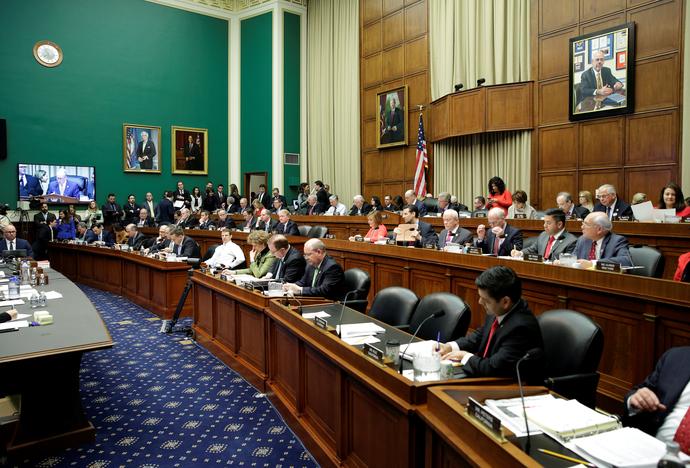 Conservative groups including Heritage Action for America, the Club for Growth, Americans for Prosperity and Freedom Partners, backed by the billionaire Republican donor Koch brothers, urged its defeat for different reasons.

The Club for Growth derided it as “RyanCare” and a “warmed-over substitute for government-run healthcare.”

“We think you have to get rid of Obamacare completely,” said conservative Republican Representative Jim Jordan, who announced plans to introduce his own bill to repeal Obamacare on Wednesday, the same day that House committees begin debating and considering amendments on the Republican plan.

Conservative opponents said the legislation maintains some Obamacare regulations and mandates that have caused rising insurance prices, creates a new entitlement in the form of tax credits and fails to embrace free-market ideals.

Instead of current income-based subsidies to buy a plan, the plan proposes tax credits, which would range from $2,000 to $4,000.

The 2010 Affordable Care Act, known as Obamacare and passed by Democrats over unified Republican opposition, is popular in many states, even some controlled by Republicans. It has brought medical coverage to about 20 million previously uninsured Americans.

Democrats and some moderate Republicans said the new House measure would hit lower-income Americans by rolling back the expansion of the Medicaid health insurance program for the poor.

Although Republicans control both Congress and the White House, the future remains uncertain for the plan. It must win approval in the House and the Senate before it could go to Trump for his signature.

“ANXIOUS” ON GETTING ENOUGH VOTES

Trump said earlier on Twitter that the healthcare bill was “now out for review and negotiation.” In a later meeting with Republican lawmakers, he said, “I really believe we’re going to have tremendous support.”

Trump, who has previously called for lower drug prices, also said on Twitter he was “working on a new system where there will be competition in the Drug Industry. Pricing for the American people will come way down!” He gave no details. His comment sent shares of drugmakers lower.

White House Office of Budget and Management Director Mick Mulvaney said the plan should pass the House before lawmakers break in mid-April.

During a White House briefing, Price sidestepped questions on whether he could guarantee the plan would not result in millions of Americans losing health insurance or whether the administration supported everything in it.

Price said the drug-pricing initiative would occur in future phases of healthcare action. Trump said on Twitter there would be additional action to allow people to buy health insurance across state lines.

Senator Roy Blunt, a member of the Senate Republican leadership, appeared to question whether there were enough votes in Congress for passage.

“I’m going to be very anxious to hear how we get to 51 votes and how the House gets to 218,” Blunt told reporters, referring to the minimum number of votes needed for passage in the two chambers.

Shares in hospitals, whose government reimbursements would be impacted by changes in federal reimbursement for Medicaid, fell, with Tenet Healthcare Corp off 7 percent and Community Health Systems down 9 percent.

Investors, insurers and hospitals expressed concern that the planned tax credits and the draft legislation did not do enough to make health insurance affordable.

Under the bill, Obamacare’s income-based and location-based tax credits would be replaced by fixed tax credits, which could put plans out of reach for consumers in certain states and result in lower enrollment, some industry sources said.

The BlueCross BlueShield Association, which represents Anthem Inc, the biggest player in the individual Obamacare markets this year, emphasized the need for affordable insurance.

To keep prices down, Republicans will need the buy-in from Anthem and other insurers, particularly after UnitedHealth Group Inc, Aetna Inc and Humana Inc exited most of the states where they sold individual insurance plans under Obamacare.

(Additional reporting by Doina Chiacu and Caroline Humer; Writing by Alistair Bell; Editing by Will Dunham and Leslie Adler)

Netherlands: A referendum on EU politics?

‘Obesity as big a threat as cybercrime & terrorism’ – senior...

Germany rejects US request to join naval mission in Strait of...