(London Post)    The present elected government in Pakistan claims that the economy is improving and corruption is negligible. If the possible corruption of PMLN members is discussed, threats of different sorts are given to those who raise the matter, then every attempt is made to harm their credibility. Still truth has a way of outliving every ploy and every lie.

Every citizen has the right to know how the government voted in by the masses is functioning.
In a democracy, elected leaders are not royalty, they are public servants elected to work for the masses and answerable to every citizen. If corruption is happening, it is theft from the common man, it may not be possible to prove how and when the corruption happened, the luxury tells its story.

The real proof is that the front-men in politics are ridiculously wealthy, even their friends and relatives become tycoons which they definitely were not before they ventured into politics.
The common man can only see and wonder, wondering what might have been if that money had been spent in Pakistan?

Even if rich politicians invested in their own country, the poor would benefit from the trickle-down effect. Meaning that the employment made possible by the projects helps, the money makes its way back to the masses and improves the economy.

It is not just the Pakistanis that are suspucious about these wealthy politicians, the world knows about it too. Recently, a letter from the House of Commons, UK to a Pakistani was seen on social media. The letter is from Julian Brazier to Zayed Zaheer,Julian is a British Conservative Party politician. He is the Member of Parliament for Canterbury,he is Parliamentary Under Secretary of State at the Ministry of Defence. The property of Nawaz Sharif and his ministers is mentioned and then a paragraph says:

” I am afraid it is well known that Pakistan has very high levels of corruption – it has been estimated that, if the billions of dollars invested in Swiss Banks by Pakistani citizens were to be used for the welfare of Pakistanis, then Pakistan could make taxless budget for 30 years and there would be no need to seek IMF /World Bank loans.” 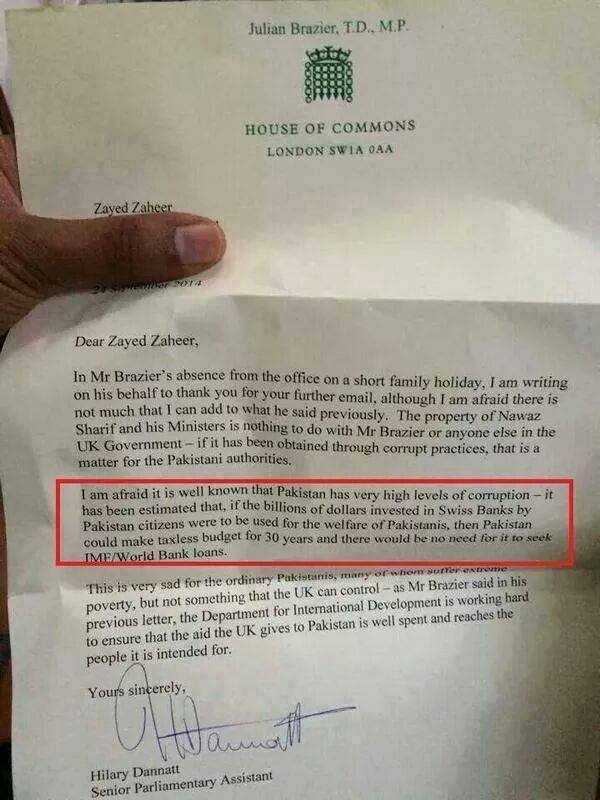 The letter goes on to say ” This is very sad for the ordinary Pakistanis, many of whom suffer extreme poverty, but not something that the UK can control- as Mr Brazier said in his previous letter, the Department of International Development is working hard to ensure that the aid the UK gives to Pakistan is well spent and reaches the people it is intended for.”

What do our swanky ministers and elected government have to say about this now ?
They spend time justifying their humongous wealth and claiming they own nothing, they own no assets. Their tax returns are laughable comedy, their public repute is bad and the common man wants back the wealth which was looted from Pakistan.

The British do not want to send any aid that would land up in the Pakistani politicians, Swiss accounts. Does the PMLN government have an answer as to why their reputation is the pits even though they claim everything is legal and above board? This is what the British democracy thinks about the Pakistani democracy, this letter is just a small example.

Reputation matters, it spreads far and wide and it is not possible to muffle the truth.
Even though a lot of businesses and money transactions are managed through proxies, cover is manipulated by having various owners. The fall-back defense is that they sold out properties, the finances are re-channelled into more subsidiary businesses. The point remains that a large political clique has emerged and politics is big business. Ministries and top posts are sold to the highest bidder, corrupt politicians from other parties also are involved.

Change can never come to Pakistan until the corrupt are punished severely and their properties confiscated. This malaise has spread throughout the Pakistani political elite. Their business interests affect our foreign policy even, the Nawaz government dare not speak out against India as there are steel mills and sugar mills, mega media deals and much more. The business empires of these politicians matter much more to them than Pakistan.

Britain appalled by murder of Pakistani woman stoned to death

Putin and Trump to hold summit in Helsinki on July 16

Rio 2016: A historic win in a hostile environment