A group of British exploration companies have found oil and gas in an area north of the Falkland Islands. The Argentine government has threatened to challenge all exploration and drilling efforts in court.

The discoveries by the Zebedee exploration well were described by companies involved as “better than expected”.

“This is a fantastic start to the 2015 Falklands drilling campaign and provides early proof of the significant remaining potential of the North Falklands Basin,” said Samuel Moody, chief executive at Rockhopper, in a statement.

The oil was found by the Eirik Raude floating drilling rig as part of an eight month exploration campaign. After this it is due to drill an exploration well at the Elaine/Isobel fan complex in the southern part of the North Falkland Basin. The rig will then move to sites to the east and south of the Falkland Islands.

Argentina has predictably not been happy about the exploration activity, which is bound to further inflame tensions over the island’s disputed ownership. 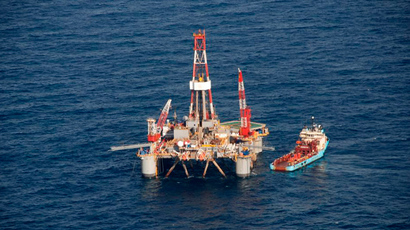 The Malvinas – as the the Falklands are called in Argentina – Islands Affairs Secretary Daniel Filmus told the state run agency Telam that the Foreign Affairs Ministry and the Planning Ministry are going to carry out a joint legal case against the oil and gas exploration.

“A new offshore oil platform has just arrived in the islands to carry out some of the most important exploration efforts to try to find hydrocarbons in the area, which carries a huge environmental risk. We want the owners of the companies to be tried according to Argentine laws and international statutes,” Filmus said, as cited by the Buenos Aires Herald.

Argentina claims that drilling for oil off the Falkland Islands is illegal and the Argentinian embassy in London issued a statement in November 2013 that British oil executives face up to 15 years in prison and fines equivalent to 1.5 million barrels of oil as well as the confiscation of equipment and any hydrocarbons extracted.

The UK Foreign Office disputed the claim and said “the UK government unequivocally supports the right of the Falkland Islanders to develop their natural resources for their own economic benefit.”

As tensions continue to mount over the islands, British Defense Secretary Michael Fallon announced in March an increase in the island’s defenses, including boosting the 1,200 troops already stationed there and modernizing the Rapier anti-aircraft missile battery.

France’s Ayrault urges Russia to back U.N. resolution on Syria