Britain was under pressure on Saturday to set out a quick timetable for a divorce from the European Union after the country’s historic vote to leave the bloc sent shockwaves around the world.

Global stock markets plunged on Friday, and sterling saw its biggest one day drop in history after Britons voted by 52-48 percent to exit the EU, which it joined more than 40 years ago.

Ratings agency Moody’s downgraded its outlook for Britain, saying its creditworthiness was now at greater risk as the country would face substantial challenges to successfully negotiating its exit from the bloc.

“Britons decided yesterday that they want to leave the European Union, so it doesn’t make any sense to wait until October to try to negotiate the terms of their departure,” Juncker told Germany’s ARD television station.

Prime Minister David Cameron announced on Friday he would resign after leading the failed campaign to stay in the bloc, and said someone else should take the lead in negotiating the unprecedented and complicated extrication.

He suggested his replacement would be in place by October. That person could be his Conservative Party rival Boris Johnson, the former London mayor who became the most recognizable face of the Leave camp and who is now favorite to succeed him.

Britain’s decision to leave the EU is the biggest blow since World War Two to the European project of forging greater unity. 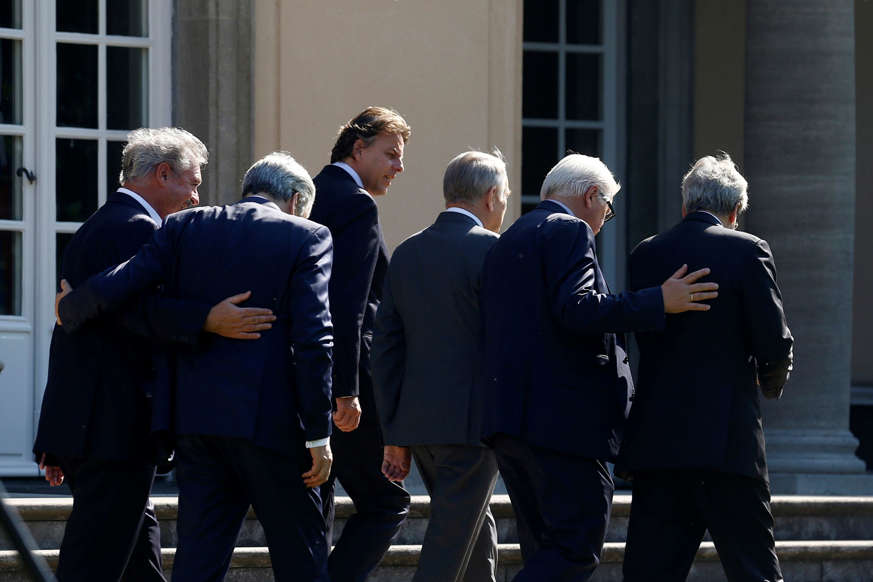 The United Kingdom itself could also now break apart, with the nationalist leader of Scotland, where nearly two-thirds of voters wanted to stay in the EU, saying a new referendum on independence from the rest of Britain was “highly likely.”

Scottish government ministers were meeting on Saturday to decide their next move.

German Chancellor Angela Merkel will meet French, German and Italian leaders in Berlin on Monday to discuss future steps, and the foreign ministers of Germany, France, Italy, Belgium, the Netherlands and Luxembourg, will meet on Saturday morning.

U.S. President Barack Obama on Friday tried to limit the fallout from Britain’s vote to leave the European Union which threatens to harm the U.S. economic recovery and distract U.S. allies from global security issues.

Obama vowed that Washington would still maintain both its “special relationship” with London and close ties to Brussels, but stood by his warning that Britain would move to the back of the queue when it came to trade deals.

U.S. presidential candidate Donald Trump, whose own rise has been fueled by similar anger at the political establishment, called the vote a “great thing.”

Supporters of Islamic State and al Qaeda said Britain had divided and weakened itself, according to the SITE monitoring service. Militant Islamists took to the internet to applaud the British vote, with one saying it marked the “beginning of the disintegration of the Crusaders.”

Investors put their cash in the safety of gold, which clocked up its biggest daily gain since the global financial crisis of 2008, ending Friday up 5.0 percent at $1,315 an ounce.

Ratings agency Moody’s said Britain was at risk of a credit downgrade, assigning a negative outlook to its ‘Aa1’ rating for British government debt.

“During the several years in which the UK will have to renegotiate its trade relations with the EU, Moody’s expects heightened uncertainty, diminished confidence and lower spending and investment to result in weaker growth,” the agency said.

Quitting the world’s biggest trading bloc could cost Britain access to the trade barrier-free single market and means it must seek new trade accords with countries around the world. A poll of economists by Reuters predicted Britain was likelier than not to fall into recession within a year.

The EU arose out of the ashes of two world wars to unite a continent and now faces the challenge of maintaining economic and political unity without Britain, which has the EU’s biggest financial center, a U.N. Security Council veto, a powerful army and nuclear weapons.

The British vote will trigger at least two years of divorce proceedings with the EU, the first exit by any member state.

There was euphoria among Britain’s eurosceptic newspapers.

The Daily Mail hailed it as a victory by “the quiet people of Britain” over an arrogant, out-of-touch political establishment and a contemptuous Brussels. Those which backed staying the bloc were more circumspect. “Brexit earthquake,” the Times said.

Britain has always been ambivalent about its relations with the rest of post-war Europe. A firm supporter of free trade, tearing down internal economic barriers and expanding the EU to take in ex-communist eastern states, the UK opted out of joining the euro single currency and the Schengen border-free zone.

Cameron’s ruling Conservatives in particular have harbored a vocal anti-EU wing for many years, and it was partly to silence such figures that he promised the referendum in 2013.

His party is now left with deep divisions after an often bitter and personal campaign with rows over immigration which critics said at times unleashed overt racism, while there are angry recriminations among lawmakers in the opposition Labour Party about the role of its leftist leader Jeremy Corbyn.

Corbyn, accused by party critics of campaigning tepidly for its Remain stance, makes a speech on Saturday which will be closely watched by critical colleagues, two of whom issued a no-confidence motion to topple him on Friday.

The campaign revealed deep splits in British society, with the pro-Brexit side drawing support from voters who felt left behind by globalization and blamed EU immigration for low wages.

Older voters backed Brexit but the young and well educated mainly wanted to stay in the EU. London and Scotland supported the EU, but swathes of England that have not shared in the capital’s prosperity voted to leave.

Left unclear is the relationship Britain can negotiate with the EU with officials warning UK-based banks and financial firms could lose automatic access to sell services in Europe.

Putin lashes out at US, West for destabilizing world

Foreign buyers’ share in house sales climbs to 4% in Turkey