World leaders gathered in Morocco adopted a UN migration accord, while countries like the United States and European Union nations and other, want national borders to remain sacrosanct.

Top UN officials and politicians from about 150 countries gathered Monday in Marrakech, Morocco for the two-day conference to unite around the so-called Global Compact for Safe, Orderly and Regular Migration (GCM).

While far-right and right-wing leaders have taken increasingly strict measures to shut out refugees and migrants in recent years, here are some key points about the pact:

What’s the aim of the pact?

The accord is a framework for cooperation and aims to reduce illegal migration, help integrate migrants and return them to their home countries.

The decision to negotiate the first international framework for migration was taken at the UN General Assembly in September 2016.

The pact that was finalised at the UN in July after 18 months of talks lays out 23 objectives to open up legal migration and discourage illegal border crossings.

One objective of the Global Compact #ForMigration is to save lives & establish international cooperation efforts on migrants in vulnerable situations. It aims to reduce the risks migrants face at by protecting their human rights & providing them with care & assistance.

240 people are talking about this

Who opposed the process?

The US announced in December last year that it would not take part in negotiations.

Later, Hungary, Australia, Israel, Poland, Slovakia, the Czech Republic, Austria, Switzerland, Bulgaria, Latvia and Italy have quit the pact or expressed serious reservations. On Sunday Chile was the latest country to pull out.

Meanwhile, the US on Friday took a fresh swipe at the pact, labelling it “an effort by the United Nations to advance global governance at the expense of the sovereign right of states”.

Opponents who fear an influx of migrants believe that the pact could challenge national sovereignty.

What are the arguments by supporters?

A host of other nations led by German Chancellor Angela Merkel are in Morocco to endorse the deal.

Defenders say migration can help national economies by rejuvenating the workforce in ageing rich countries and by providing a needed source of cash to poorer countries through remittances. They say orderly migration will save lives.

“In the many places where fertility is declining and life expectancy is rising, economies will stagnate and people will suffer without migration,” UN Secretary-General Antonio Guterres said in his opening address.

“It is clear that most developed countries need migrants across a broad spectrum of vital roles, from caring for elderly people to preventing the collapse of health services,” he said. 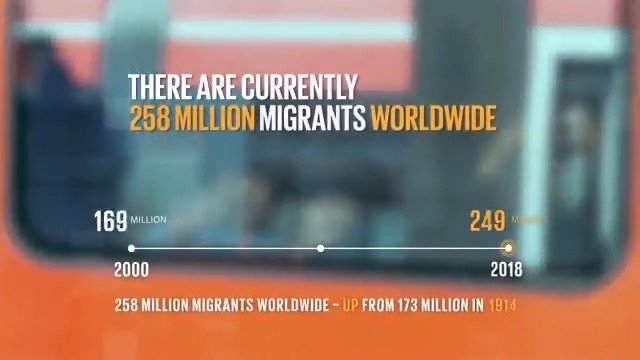 Global migration is a challenge that requires a global solution. No country can address it effectively in isolation. That is why I fully endorse the Global Compact #ForMigration adopted in Marrakech.

627 people are talking about this

Is the agreement binding?

“It is surprising that there has been so much misinformation about what the compact is and what the text actually says,” UN special representative for migration Louise Arbour told reporters in Marrakesh.

“It creates no right to migrate. It places no imposition on states.”

The Global Compact #ForMigration is not legally binding, nor does it create new obligations for states, but its strength rests in the ability of countries to cooperate with each other.
#Mig4Dev | #GFMD11https://twitter.com/IOMatEU/status/1070295992203911169 …

No country can face the challenges and opportunities of regular, orderly migration on its own. Cooperation at all levels essential – @IOMchief, Antonio Vitorino at the #GFMD11 Summit in Marrakech #Mig4Dev

112 people are talking about this

Migrant dispute across the world

In Belgium, the Flemish nationalist party said it would quit his coalition over the pact while the country’s liberal premier Charles Michel won the support of parliament to head to Morocco and back the accord.

The row also has pushed Slovakia’s foreign minister to tender his resignation.

Meanwhile, Denmark plans to banish rejected asylum-seekers or those with a criminal record to a remote island as Martin Henriksen of the anti-immigration Danish People’s Party told The Associated Press that the government’s move “is a signal to the world that Denmark is not attractive” for migrants.

In the US, President Donald Trump has pledged to build a wall on the US-Mexico border amid the flow of migrants from Central America while populist coalition government in Italy has clamped down on boats rescuing migrants at sea.

This is not a Global compact #ForMigration, but for safe, orderly and regular migration. This is an effort to do better together, to look at the decades ahead of us, and collaborate on the wide range of issues pertaining to international migration.

284 people are talking about this

Can a deal secure migrants’ rights?

Governments have agreed to open up more avenues for legal migration to encourage labour mobility, education opportunities and prevent migrants from falling victim to traffickers. Also according to the compact, the recruitment of migrant workers will be reviewed.

However, activists argue that the pact, and its non-binding status, don’t do enough to secure rights of migrants.

“Unfortunately, the non-binding nature of the Global Compact on Migration makes its implementation solely based on the goodwill of states supporting it,” Amnesty International’s senior advocate for the Americas, Perseo Quiroz, said in comments emailed to AFP.

Some 258 million people around the world are migrants, according to UN data, or 3.4 percent of the global population.

The UN General Assembly is set to adopt a resolution formally endorsing the deal on December 19.

Sanctions for blocking Lebanon government may get tougher: France says

45% of Germans refuse to get COVID-19 vaccine even if available,...

Hollande pledges artillery to fight IS in Iraq following attack in...

Sanctions for blocking Lebanon government may get tougher: France says

Corbyn warned of more resignations as he fights to stay Labour...